The Evolution of Love 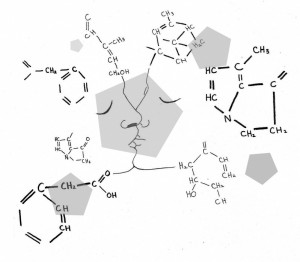 Wearing deodorant may very well prevent you from meeting your true love.

“It’s not like mate choice decisions are under our conscious control,” said Barry Sinervo, a UC Santa Cruz evolutionary ecologist. “Anybody that’s fallen in love can understand that. We talk about chemistry in a very vague way, but this is the chemistry of attraction.”

Pheromones encode genetic information. Certain pheromones smell better to an individual than others because some people are more genetically compatible than others. Specifically, people who have very different gene complexes that affect immune function will be extremely attracted to each other.

“Because they’re different from you, when you combine to make progeny, the progeny now have a much greater amount of variation,” Sinervo said. “This is very useful to fight off diseases.”

The pheromones that encode this genetic information are secreted primarily from the armpits and the groin, Sinervo said. Deodorant and perfume mask these secretions.

“I tell [my students], ‘Look, wash, be clean, have a shower so you aren’t smelling offensive, but let your scents be out there because that’s what’s going to snag this one true love that may in fact be really important from the point of view of the kinds of kids that you’re going to produce,” Sinervo said.

Aside from pheromones, humans also give visual and cultural signals to attract mates.

“In our society, being very physically fit is quite an indicator of male quality, which may explain why males try to fake that display,” said Julie Teichroeb, a visiting anthropology professor at UCSC. “[This explains] why they might do steroids or work out for extreme amounts of time.”

Physically, males advertise their masculinity through being larger, significantly hairier and having deeper voices than females. Females develop breasts and more fat around their buttocks to advertise their fitness to bear offspring, Teichroeb said.

Among humans, a mate’s fitness may also be measured materially. Fiscal success is considered potentially attractive in a mate.

“Making lots of money, having nice things, these things attract females because they’re an indication that the male is competitive,” Teichroeb said.

Intelligence may also be attractive. This can manifest in many ways, for instance a sense of humor.

“Some people argue that our wit and our humor evolved as a showing off to mates, because you’re essentially showing off your intelligence when you’re showing that you’re funny,” Teichroeb said.

Sinervo said the evolutionary history of intelligence is intimately linked with the social evolution of monogamy and joint parenthood.

“[Humans] have the longest care period for progeny,” Sinervo said. “That’s what makes us smart. Kids have the ability to be born completely plastic. They’re just a big fat sponge and they’re learning stuff for 18 years or longer. That takes two parents.”

Rather than being equipped with numerous instincts, human children must learn almost everything they need to know in order to survive. Sinervo said this adaptation led hominids to “slip” into monogamy.

“Those males that became monogamous ended up producing more progeny and better progeny and probably progeny that not only got the female’s library of information over its lifetime, but the male’s as well,” Sinervo said.

Although human evolutionary history and genetics explain how to create healthy, knowledgeable offspring, much more is at work besides genetic compatibility among humans.

“We rarely act in a way that’s very adaptive,” Teichroeb said. “It’s important to keep that in mind when we talk about people. When people use biological determinism [to model how] people should behave, it’s never accurate because we are so complex.”

“Coming from a woman’s perspective, I’ve dated a guy that was not good for me, kind of a jerk, but genetically we were well matched because he smelled so good to me and hopefully vice versa,” Teichroeb said. “You might produce healthy offspring with someone — that doesn’t mean that personality wise or in our very complex human society we would actually be a good fit together.”

The complexity of human social and cultural practices makes it difficult to boil down human mate selection to a simple science.