Under the worn floorboards of the Catalyst Club’s small-stage Atrium, a sonic bond runs deep. Interrupting a string of good vibrations bound and blasted from heavyset equipment, the music pauses and a hundred breaths are drawn. All eyes are on the DJ now.

“I love it when I play a track and it’s quiet, and then I’ll just drop into [a mashup] … my favorite is just connecting to the crowd and whatever I play, just seeing them feel it,” said DJ and UCSC student Jayko. “Whatever song I’m playing — if they react to it, at all, and you can feel that connection to them, that’s just a high in itself.”

On Feb. 1, the Catalyst hosted an event called “ICED OUT” in the Atrium, presided over by electric architects Rudebrat, Sam F, Jayko and Ducifer, whom effectively catapulted its sonic space into a syncopated stratosphere. Current UCSC Electronic Music Studio (EMS) minors Sam F and Jayko brought the ruckus in a rapid-fire release of tracks old and new. 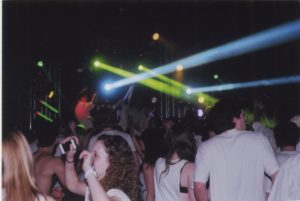 Rooted in the tradition of metal and classic rock, the up-and-coming DJs orchestrated the show with all the command of cabled captains, finessing from dancey tracks to downtempo songs in seamless transitions.

Both Rudebrat and Sam F’s roots reside in metal, but since then the guys have gone from moshpits to fistpumping as their tastes have evolved. When Sam F first heard dubstep, however, he said he hated it.

“That’s when dubstep was very simple, slow, and there wasn’t much going on in the music,” he admitted. “It was just like wah, wah, wah wah. And then it got into the whole hyphy dubstep movement with Skrillex, and I really loved when it was just craziness because I’m a fan of metal and can just relate to it. It was like they figured out a way to make metal electric. That’s when I fell in love with [dubstep].”

The fast-and-furious vibe of the show, albeit breathtaking, was only prevailed by the intimacy of a packed Atrium. While larger festival atmospheres allow for big-name DJs to engage in crowd-feeding indulgences, Jayko says that small spaces like the Atrium fully immerse the performer into the audience experience.

“Playing a club, you’re bouncing back-and-forth with the crowd, you can experiment more and look at their faces, see how they react,” Jayko said. “There are certain key people in the audience that you can look for, and once you react, everyone around them reacts … it’s like a domino effect.”

Deconstructed melodies and complex chaos in the vein of “tropical bass and jungle boogie” ensued throughout the night, inciting the audience to scream and jump up on stage until the DJs were encased in the undulating masses. The crowd was mostly of the 18-22 year old variety, nearly indistinguishable from one another in a haze of rainbow strobe lights, artificial fog, smokes and sweat. 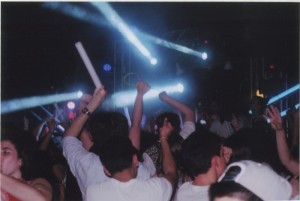 “It got to the point where I was hunched down and tightly squeezed against the DJ booth,” said Jayko. “It was really hectic. We had the lights malfunction because someone kicked the cable out.”

Although this proved worrisome for the stage-confined DJs, the sheer decibel level of their performance was what really set off the Catalyst staff. The show had evidently exceeded the voltage limit and “redlined” several times, resulting in a power play between the sound engineer and the DJs.

“I’ve seen DJs redline their whole set and it’s not that big of a deal,” DJ Sam F said after a fight broke out post-show between the artists and venue employees.

After signing to Vital Management two weeks ago, Sam F’s future plans are experimental. Like many of his fellow EMS minors at UCSC, he said he wants to incorporate more live performance instrumentation into his sets, right alongside his UCSC cohorts Jayko and Rudebrat.