Newton and Helen harrison’s new exhibit, currently on display at the Sesnon Gallery, explores global climate change through a variety of mediums.

The walls of the Mary Porter Sesnon Art Gallery are covered in maps. Some stretch from floor to ceiling, some bear scribbled notes and some hang between photographs and diagrams. These are the maps that make up “The Harrison Studio: On Mixing, Mapping and Territory.”

The work comes from Newton and Helen Mayer Harrison, honorary professors-in-residence at UC Santa Cruz in the Digital Arts and New Media graduate program and pioneering artists in the ecological art movement — a term that refers to artistic work dealing with ecological issues. For more than 40 years, the Harrisons have explored solutions to support biodiversity and environmental consciousness through cutting-edge artistic practices.

“[The Harrisons] have encountered a lot of really influential artists we study today and they’re quietly living in Santa Cruz,” said gallery director and co-curator Shelby Graham. “We’re so lucky to have them here.”

The husband and wife team composes their art using maps to demonstrate their environmental concerns and question how the negative forces acting on the global climate have affected the planet.

“A map is an image that privileges one thing or another,” Newton said. “We will make a map that has subject matter we think is important such as river systems, mountains, forests or alternatively, things we disagree with.”

The Harrisons’ maps primarily focus on telling the stories of global warming, which they have dubbed a force majeure — a force with so much dimension that there can be no resistance.

“[The force majeure] is really a connection and combination of all the industrial processes and forces that work negatively together to contribute to global warming,” Helen said.

For the Harrisons, a project emerges when they notice a pattern. In the past, they have focused on issues such as urban renewal, agriculture and forestry, recognizing patterns in the environment that reflect larger global changes. By using maps, the Harrisons are able to present these changes in a way that audiences can grasp, as mapping and recognizing patterns are two key methods to building familiarity with places or concepts.

“Pattern recognition is almost the basis for survival,” Newton said. “Many things happen to you as you see a pattern change or distort.”

The artists might take out all the streets in a map to highlight the waterways, enlarge countries for effect or add elements to show the ecological forces acting on the planet. They can’t always articulate this goal themselves so they call on biologists, urban planners and historians, yet are wary to call their artistic process a collaboration.

“We need a lot of help,” Newton said. “Lots of people help us but so do books and so does the Internet. And also we help others. Collaboration is sort of a throw-away word for people helping each other to get from one place to another.”

The work itself is a marriage of various formal elements. Using maps, photographs and text, the artists reflect the complexity of these global issues and the multi-faceted efforts needed to overcome them. In particular, the written text accompanying these maps serves to enhance the exhibit’s storyline.

“Essentially the work is as narrative as it is visual,” Helen said. “In using poetic prose, the language has denotation but it also has connotation. It opens peoples’ imaginations.” 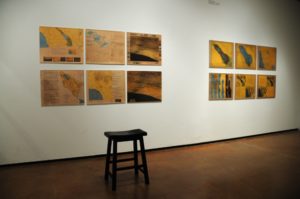 Particularly in the small space of the Sesnon Gallery, the text is essential to informing the audience and moving them between images and ideas presented throughout the work. The balance between text and image helps shape the story of the powerful environmental shift affecting the world.

“We try to strike a balance with a particular kind of poetic prose,” Newton said. “The value of [prose] is that it lets you condense information.”

Throughout the exhibition, the idea of paying attention continues to arise as a recurring theme. The writing on the walls of the Sesnon urges gallery-goers to “pay attention to the meaning of nature” and the first work that one encounters upon entering the gallery begs the question, “Who’s thinking about this eventuality?”

The world and its global climate are changing before our eyes. The Harrison Studio strives to recognize the patterns before it’s too late to stop this force majeure.

The Harrison Studio: On Mixing, Mapping and Territory will be on display through March 15, Tues.–Sat., 12–5 p.m., Wed. 12–8 p.m. The Earth as Metaphor eco-art lecture series takes place at the Porter Faculty Gallery Wednesday evenings from 4:30–6 p.m.