Hip-hop dancers perform their routine, entitled “Swaggin’ With A Purpose” at the dress rehearsal for the Random With a Purpose dance show at UC Santa Cruz.

Synecdoche is a figure of speech in which a part represents a whole and a whole represents a part. UC Santa Cruz’s dance group Random With a Purpose explores this sense of unity through a varied set of dance styles and performances in its upcoming show, “Synecdoche.”

“This year, our theme for Random is ‘Synecdoche’ … used to represent the diversity in the dance community at UCSC,” said fourth-year and co-director of the dance show Chelsea Wells.

For the weekends of Feb. 15–17 and 21–24, Random’s annual dance performance returns for its twenty-first show at UCSC’s Second Stage Theater. This year, Random’s show “Synecdoche” will include a performance from Haluan, an on-campus hip-hop group, along with other pieces that explore jazz and contemporary dance.

The show is being directed by Wells and Adrienne Habiger, both of whom have been performing in the show since they were first-years at UCSC.

“That’s how we met and we’ve both been involved with this show for the past three years,” Wells said. “[We] decided that after choreographing and performing in the show in past years, we could take on the task of directing together.”

Wells said the UCSC dance program has evolved in the past four years. As of 2012, students are able to officially minor in dance.

“It’s been exciting to be involved with the dance community and see it develop so much,” Wells said. “The community’s really blossoming. We’re getting a lot of talented dancers and it’s an exciting time.”

Second-year human biology major Rachel Peterson decided she wanted a bigger role in Random’s production after dancing in the show her freshman year. Peterson, who is choreographing a piece this year, said taking part in the show helped her open up to the UCSC dance community as a whole.

“I love taking an idea and making it into something, and expressing that idea through dance,” Peterson said. “So I wanted to try it with a group of dancers and ‘Random’ was just the perfect opportunity to do that.”

For Peterson and her fellow dancers, Random is a space for them to develop ambitious performances. One student who’s had the opportunity to create an expansive dance is third-year Zoe Galle.

Galle is choreographing the piece “Where the Sidewalk Ends,” which is based off of the dance film “Pina.” After watching the film, Galle viewed public places, like the street or the sidewalk, as an opportunity for a stage. 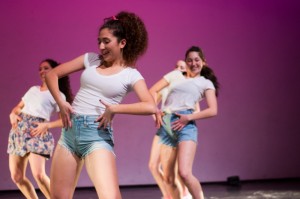 “Every place in public began to look like this interesting space to engage with and play with through movement,” she said. “[I wanted to] explore this idea of public space and what that means … to play with this idea of space and how dancers move through space as a unit but also as individuals.”“Where The Sidewalk Ends” brings together a mix of ballet, contemporary and hip-hop dance. Galle said she wanted to examine people’s insecurities with movement through her choreography.

“I think it’s really important to create spaces where everyone can try to dance and not feel stupid about how they move, because everyone moves differently,” she said. “Dance is a celebration of our bodies and of life in general.”

Random opens Feb. 15–17 and 21–24 at 7 p.m., Sundays at 3 p.m. Tickets are $11 for general public and $10 for UCSC students and seniors. Discounts are available. UCSC undergrads will receive one free ticket with valid student ID.