“Why the hell is someone calling this early?” he thought, groggily picking up the phone. On the other end, the familiar voice of a colleague congratulated him: “Welcome to the National Academy.”

“I literally could not speak,” Estes reflected. “I was so overwhelmed.”

On April 29, UC Santa Cruz ecologist James Estes and seismologist Thorne Lay were elected to the National Academy of Sciences (NAS), a prestigious society that provides scientific and technological advice to the U.S. government. Membership in the academy is very selective and a mark of distinction for scholars.

“It’s a big deal for scientists,” Estes said. “To think you might get elected to the National Academy, no one ever thinks that because there are so many deserving people.”

The NAS researches and releases reports on technology, medicine and the physical, biological and social sciences. Since non-members and members alike conduct the research, election is a gesture of recognition, said dean of physical and biological sciences Paul Koch.

“It is very much a symbolic honor,” Koch said. “It is formal recognition that they are among the top scientists in the country.”

Twelve UCSC faculty are members of the NAS, and the recent elections of Estes and Lay indicate the growing authority of UCSC’s research, Lay said.

“Because UCSC is a younger institution, there have not been very many homegrown academicians, [but] we’re seeing the maturation of the campus programs and the recognition that we have very strong programs,” Lay said.

Estes and Lay were elected to the NAS for their acclaimed research in marine ecology and seismology.

Estes’ research deals with the role of sea otters in maintaining healthy kelp forests. For 30 years, Estes traveled to the Aleutian Islands in Alaska, comparing islands with natural levels of sea otters to islands where populations have been reduced by excessive hunting.

“Otters were exploited for most of the islands’ history besides small pockets where they remained in small numbers,” Estes said. “I just used that as a natural experiment to contrast areas with or without sea otters.”

“Before our work, the mindset was that predators have negative effects on things humans value, [but] our work added a whole [other] dimension to that,” Estes said. “They have both negative and positive effects and those effects ought to be balanced against each other when making conservation management decisions.”

Lay’s election was based on his research studying the seismic waves released through the ground from earthquakes, volcanoes and explosions.

“Earthquakes release energy that produce seismic waves. We have sensors, like stethoscopes, listening to the earth that hear when waves are released and spread through the rock,” Lay said.

“It’s a main way of ensuring compliance of countries when they say we’re not going to test nuclear weapons,” Lay said. “They sign a treaty and we can listen. It is very difficult to conduct a nuclear test without it being observed because it releases a lot of sound that goes through the rocks. We [seismologists] can detect an underground explosion.”

However, both professors emphasized the collaborative effort of their research.

“When you get some sort of recognition, you pause to think about, ‘wow, I’ve really worked with a lot of people and they all deserve a piece of this,’” Lay said. “It’s gratifying to receive it but you hope everyone keeps in mind that nobody works in isolation or in a vacuum.”

Estes expressed similar gratitude for his colleagues and students.

“As I reflect back on this and all that happened, it’s very clear to me that part of it was me but a lot of it was other people,” Estes said. “If I had never come to Santa Cruz, I don’t think any of this would have ever happened. So much of my vision of science evolved as a result of the environment I was in here and the people I interacted with.”

A week after the election, Estes and Lay said the afterglow still remained.

“You get a little dizzy from the onslaught of emails, congratulations and people shaking your hand,” Lay said. “You know, I’m not a very arrogant person, but I went, ‘Wow, I feel pretty good!’ I couldn’t stop smiling for about five days.” 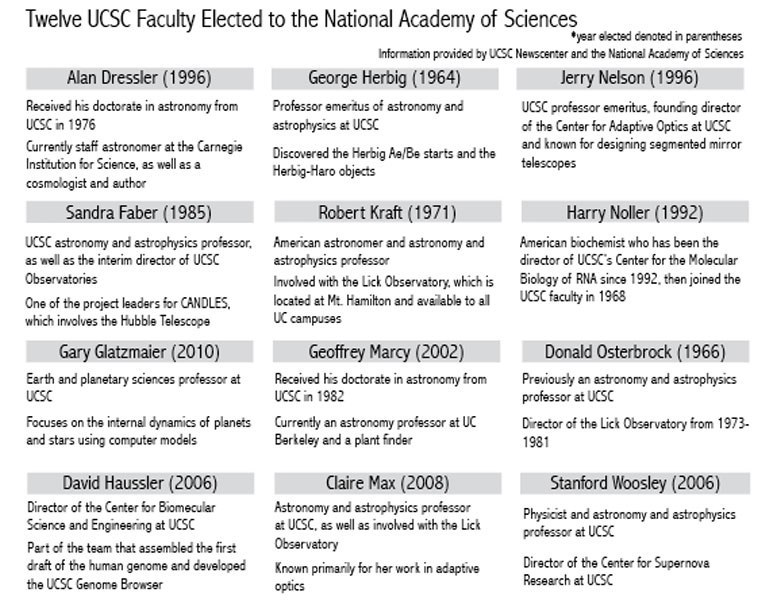