Pumping the Breaks on a Rising Deficit 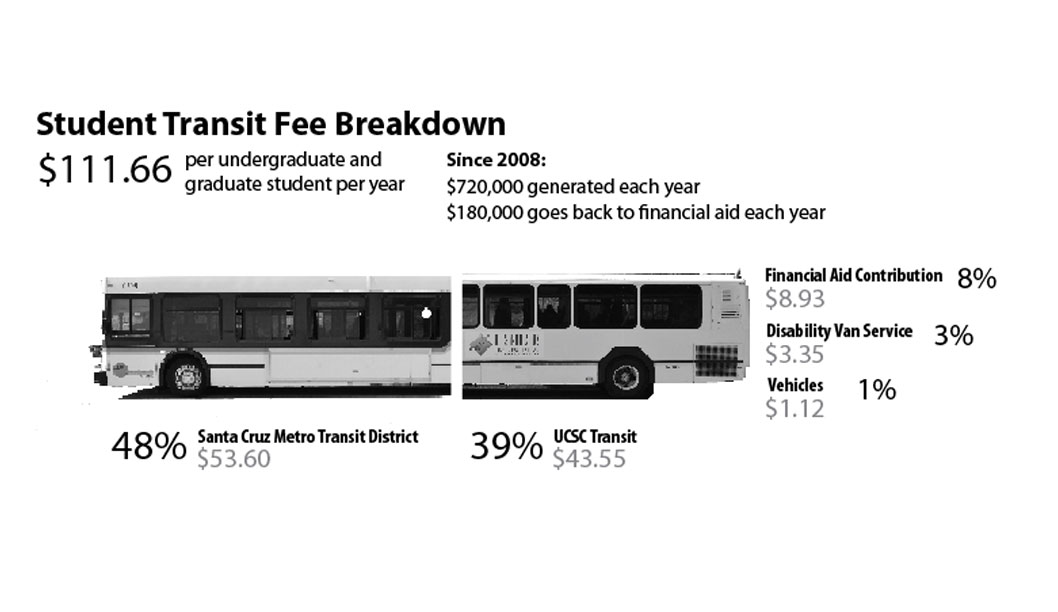 Transportation and Parking Services (TAPS) collects only $3 from each ticket the UC Santa Cruz Police Department writes, amounting to around $60,000 per year. With a deficit close to $1.7 to $1.9 million per year, TAPS must cut costs or cut services.

TAPS oversees and operates the facilities related to parking and transit services. It is the second largest transit district in the county with 12,000 to 13,000 passengers transported daily by the campus shuttles, and 10,000 to 12,000 people by the Metro buses to campus. When Measure 24 passed in 2006, this fee started as $69 per year with set yearly increases up to $111 per year in 2008.

“[The deficit] jumped up through the years and we’ve been pretty good about keeping it stable and actually bringing it down in a couple of years,” said TAPS director Larry Pageler. “But this just isn’t sustainable and we’ve got to bring it back down somehow.”

A number of factors contributed to the deficit, including a rise in salaries for the loop bus drivers and an increase in healthcare and retirement benefits. Running buses also became more expensive, as fuel prices increased. According to the U.S. energy information administration, gas prices rose from $2.70 per gallon in 2009 to $4 per gallon in 2014.

When the Metro dropped the Night Owl service due to a budget crisis three years ago, TAPS took over the service, which increased staff work hours and the operational hours of the buses, Pageler said.

“The only way we can bring the deficit down is by either cutting costs or by having the students levying themselves an increase in their fee,” said TAPS assistant director Susan Willats. “Understanding how expensive it is to go to college, nobody wants that.”

Additionally, TAPS receives no state funds. All expenses are paid for by the money collected through fees, fares or grants. A contribution from housing is also collected each year which helps operate the night shuttle service and the traffic control program. Currently, attempts are being made to cut costs as opposed to cutting services, Pageler said.

A few years ago, the schedule was redesigned for more buses to come during a class change and fewer while class was in session. Proposals for increased vanpool fares over the next three years, as well as a proposal for staff and faculty to pay $10 per month for a Metro pass — up from $8.75 — await Chancellor George Blumenthal’s approval.

Reducing traffic is also a priority for TAPS, considering its agreement with the city to limit traffic caused by UC Santa Cruz. In fact, parking permit sales decreased over the last five years, averaging $50,000 less per year.

“We are reducing the number of people who want to use our parking lots, but it’s taking away the income we use to pay for the vanpool program, the bike shuttle and all of these other things people love,” Pageler said.

“The dance we do is to try and make alternatives to driving, but we rely on parking fees,” Willats said. “But we don’t want to build more parking. The next parking structure we have to build will cause the cost in the parking permits to double. No one wants to pay $1,400 a year for parking.”

For two weeks in both fall and spring, TAPS calculated the traffic coming in and out of campus. According to the results, 25 percent of people travel by bus, accounting for only 2 percent of traffic. Approximately 35 percent of UCSC traffic is single occupant cars, which is extremely low compared to the 60 percent of single drivers making up the traffic in the city of Santa Cruz and the 70 percent making up most of California, Pageler said.

“At UCSC, most people are riding their bikes or carpooling. A lot of people living off campus are using the shuttles,” Pageler said. “We are a really good example of how you can live and move around and get places you want to go in a more sustainable manner than driving everywhere.”

One program promoting sustainable transportation is the UCSC Bike Library, which is funded by TAPS and lends bikes to students and faculty each quarter.

“It’s really important to start investing in sustainable alternatives like shuttle buses, the Metro system and bike opportunities,” said UCSC Bike Library coordinator Julie Foster. “The more we invest in that, the more chances we have of accommodating the needs of transportation for our growing campus.”

While Foster said the Bike Library provides an alternative to driving, the program is limited by the amount of bikes it can lend out each year due to TAPS’ restricted budget.

Though the deficit limits the expansion of many programs like the Bike Library, TAPS continues to look for ways to cut service costs as opposed to cutting services to provide students with the transportation to get around efficiently and safely, Willats said.

“I have dreams about inviting student input in the fall about their transit fee and how we can best utilize it,” Willats said. “We want to let people know we’ve been in a hole and it’s going to affect their service. If we have to make changes, we’d like to have input on those student changes.”

A previous version of this story incorrectly stated that TAPS writes parking tickets. In fact, the UC Santa Cruz Police Department does.