Stuck in the Waiting Room

It can take a lot of courage for someone struggling with addiction to seek help. After much contemplation, when people make the choice to walk through the doors of Janus Community Clinic, they may be unpleasantly surprised to be put on a waiting list or denied treatment altogether.

“Depending on the time of year and how short we are on funding, [the wait list] can range from 30 to 90 days,” said Janus data analyst Lorraine Shuler.

Janus is one of a handful of nonprofit rehabilitation facilities in Santa Cruz. It provides services ranging from sub-acute detoxification — an intensive 24-hour residential care for people with substance dependencies — to methadone treatment, during which opioid addicts walk in and receive their daily dose of a drug that curbs opiate cravings.

At $362 per day, sub-acute detox is the most expensive service Janus offers, while methadone treatment is the least expensive at $15 per day. Patients can pay for their treatment via self-pay, which allows individuals to spread out their balance in monthly payments, or they can use their private insurance. However, every insurance company has a different contract, so how much treatment a patient can receive depends on what the insurance plan covers.

For example, an individual may want to be a part of the 28-day residential program, in which patients live on-site for up to 28 days. If a patient is paying with private insurance, and the insurance company only pays for 14 days, he or she may not be fully recovered by the time those 14 days are up, said Janus executive director Rod Libbey.

Janus also caters to “indigent clients,” people who don’t have insurance and have little to no income, Libbey said. The facility uses grants from the state and county to take care of individuals who have no other means to pay for treatment. Janus uses a sliding scale based on a patient’s income to determine the cost of treatment. As for those who can pay for it, either with insurance or with self-pay, Janus charges a bit more to cover the expenses of publicly-funded patients.

“[The county and state] pay the minimum amount of what our expenses are and sometimes less, a much lower rate,” Libbey said. “When we have insurance or self-pays, they tend to pay a little bit more and then the whole thing balances out. If we were taking only publicly-funded people, we probably would close our doors. It doesn’t really cover our expenses, so we use the higher rates of insurance and self-pay to cancel out.” 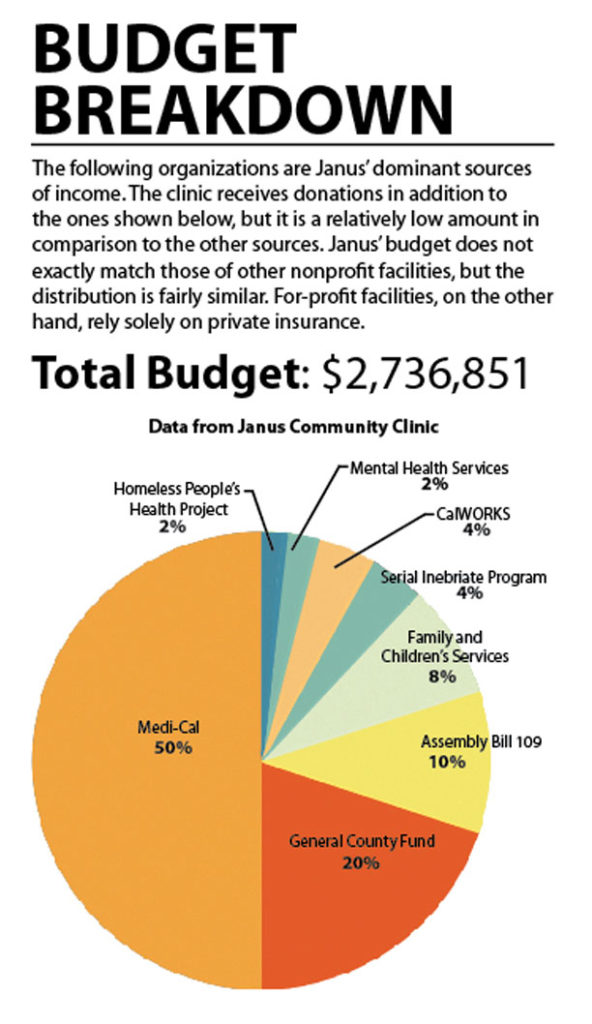 Janus receives a lump sum of county and state funds once a year and spreads it out across the 12 months. Unfortunately, this means the facility can only afford to treat a certain amount of people who can’t pay for treatment on their own.

“We don’t have enough public funding. That’s where it really hurts for indigent clients. They would qualify for public funding, but we can only take so many people a month,” Shuler said. “Let’s say for example, it pays for eight residential beds. In a given month, if we have 10 people trying to get in, two of them go on the waiting list.”

Not only does Janus treat individuals looking to recover from addiction — it also serves as a rehabilitative alternative to incarceration. Janus has contracts with the Santa Cruz Probation Department for the Serial Inebriate Program (SIP) and the state for Assembly Bill (AB) 109. SIP works with individuals who are frequently intoxicated in public and AB109 shifts the responsibility for incarcerating many low-risk inmates from the state to counties.

Libbey estimated Janus treats 40 to 50 people who may have otherwise gone to the county jail. He also said if Janus received more public funding, it would treat more patients and the county jail possibly would not make as many drug-related arrests.

Santa Cruz County Deputy Sheriff Ryan Kennedy said it is nearly impossible to sort out which arrests are low-risk drug-related arrests, and which are more serious offenses. For example, an individual arrested for narcotics possession is much different from an individual who may have committed a violent crime to feed his or her substance addiction. Kennedy said possession offenses are, for the most part, harmless.

To treat a substance-dependent individual, Kennedy said arrests are sometimes necessary.
“You can’t just find someone who’s in possession of narcotics and say, ‘Here’s a slip. I want you to go to this program.’ That wouldn’t work,” Kennedy said. “What you have to do is pull them in and take them off the street, get them sober, separate them from the things binding them to that, at least for a day, and then you can set them up with the program.”

Although it can take getting arrested for someone to realize they may want or need treatment, arresting people is not the cure for substance addiction, Kennedy said.

“Just the arrest alone isn’t always the thing that makes it a good process, but the arrest leads to other things that make it a better process. If we just arrested them and that was it and we didn’t evaluate it on a full spectrum, I don’t know if that would always solve the problem. A lot of times, we arrest people and we try to set them up for options for success, whether or not they choose that.”

Although the correlation between rehab funding and number of arrests is indeterminate, Janus and other nonprofit facilities are expecting to see more funds in the next year or so. Libbey said county funding is set to go down, but with the passage of the Affordable Care Act, MediCal reimbursements are set to go up.

“The hope is someday,” Libbey said, “everybody who qualifies for MediCal, which will be all of the indigent people, will go to some level of treatment on MediCal. That’s the dream.”