Balling on a Budget

“It was hard to know we couldn’t compete at the highest level because of funding,” said women’s club lacrosse captain Ashley Bark. “It made us realize how important it was to fundraise. It was frustrating.”

For athletes like Bark, the minimal amount of funding toward sports clubs can be disappointing. Not playing due to financial reasons is something that shouldn’t happen to a team. 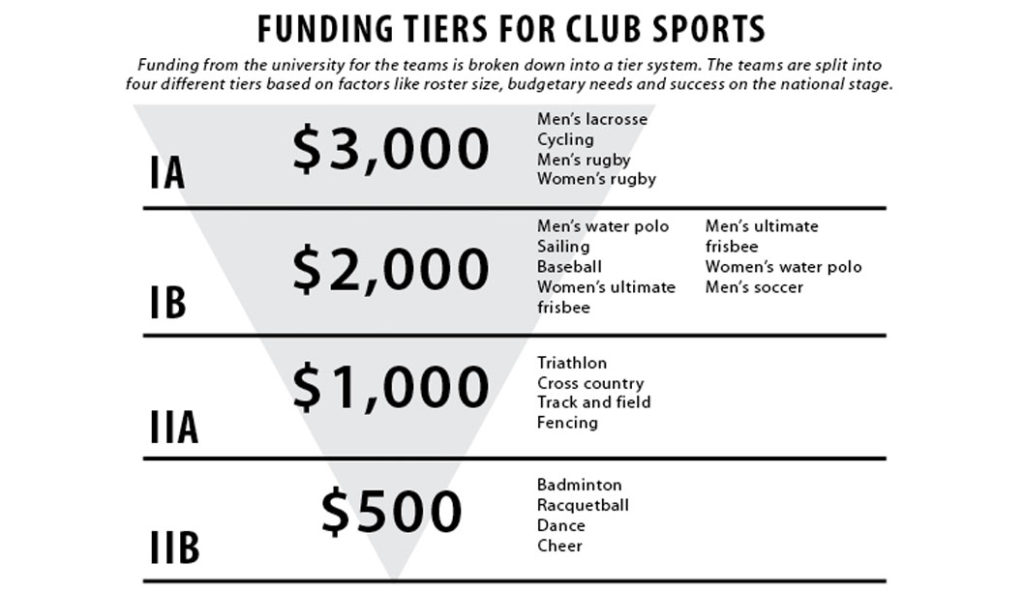 Budget constraints caused UCSC’s athletic department to lose programs altogether in the past. The same Division III institution that boasts six men’s tennis championships and one men’s water polo championship was forced to cut both the men and women’s NCAA water polo teams in 2008 due to budget cuts. The school’s sports club program also suffers from similar financial limitations.

In response to the minimal funding for on-campus sports clubs, students voted for Measure 23, which passed in 2006. This referendum established a permanent fee of $2.25 per student per quarter to continue running club and intramural programs. Without this fee, the Office of Physical Education, Recreation and Sports (OPERS) competitive sports director Kevin “Skippy” Givens was unsure about the future of the school’s sports clubs.

“We recognized we were not going to address our full financial needs through one referendum,” Givens said. “This was going to be part of a long-range plan. We were in a position in 2006 where we felt that if Measure 23 wasn’t passed, then we were going to start losing sports clubs.”

The university allocates the majority of its limited $36,000 budget toward the intramural program rather than to sports clubs. With intramural teams, the school sees a return because each intramural athlete must pay a $60 fee to participate.

To divvy up the low funds among club teams, Givens created a tier system to separate teams based on certain criteria, including roster size, compelling budgetary needs and success on the national stage. Tier 1A receives the most funding at $3,000, while tiers 1B, 2A, 2B and 3 receive $2,000, $1,000, $500 and $0, respectively.

Although the upper tiers receive more funding, the teams still do not have enough money to pay their coaches a salary.

“All coaches are volunteers. If a coach is paid, then they are paid off the books,” Givens said. “It’s mostly just the team pooling some money together to pay them. It’s not an official function of the university.”

Even though each player is responsible for contributing $300 through out-of-pocket expenses and fundraising, the coaches still aren’t sufficiently reimbursed. Women’s water polo captain Maya Zelcer is devastated by the lack of coaches’ salary.

“It’s heartbreaking,” Zelcer said. “They love the sport so much that they devote two hours per night after working. We give them some money, but it’s nothing compared to what they should be getting paid. We are very thankful for them. That is the only way to put it.”

Fundraising is necessary for most UCSC sports club teams. Zelcer said that while the school covers her team’s 1B $2,000 league fee, which allows them to participate in league play, the team still needed to fundraise quite a bit for other expenses.

“We fundraise at Woodstock’s Pizza for travel, swimsuits and tournaments,” Zelcer said. “We also send out fundraising letters in hopes that our family and friends will help us.”

Although coaches are underpaid and athletes overpay, several independently run underground club teams are petitioning to join the mix. Kevin Givens believes it will be tough for most aspiring teams to become registered and recognized due to the school’s lack of facilities.

“We actually have more clubs than any other UC,” Givens said. “It doesn’t mean we won’t be accepting more clubs but it is going to take some greater scrutiny on the clubs we already have. Are they compelling enough to remain, or would we be better served focusing our attention on bringing these new teams in?”

Although Givens remains focused on supporting the existing club teams as much as possible, obstacles such as the one faced by the 2012 women’s lacrosse team still exist. Even with Measure 23 in place, insufficient funding still prevents deserving athletes from advancing in competitions.

With 600-700 athletes competing on 21 club teams each year, Givens doesn’t think the current budget is adequate enough to support a growing program.

“We’d love to include [more teams], but if we are looking at adding any activities to the upper field, that may compromise our ability to offer it to the clubs we already have,” Givens said. “In spirit we want to allow all those clubs in.”