Director and research scientist Jim Kent and senior software developer Hiram Clawson from the UC Santa Cruz Genomics Institute worked along with fellow research scientists to find all of the possible Ebola sequences and develop the Ebola Genome Browser.

“It was about 12 of us working on the browser,” Kent said. “It took about a week to get the first version we shared with virologists and immunologists, another week to make changes according to their feedback, polish it and turn it into something suitable for a more general audience.”

The Ebola Genome Browser is an online portal that can be accessed by anyone. The browser displays collective data about the virus and can align 160 different viral sequences from both current and previous Ebola virus outbreaks. In a way, it compares and contrasts both current and previous outbreaks. This information is available for researchers to work toward containing any further spread of the virus.

“They need to know if the

virus is changing so they can adjust any possible therapies or vaccines that need to be developed,” Clawson said.

The browser is an efficient way for scientists to integrate their data if they’re interested in a particular region within the Ebola genome.

“Many are interested in a particular gene called GP (Glycoprotein) — it’s the only gene outside of the virus,” Kent said. “It’s the one the immune system tends to interact with.”

Kent and Haussler collaboratively developed the first working draft of the Human Genome sequence in June 2000. The same system they developed is now being used for a specific virus — Ebola.

Kent described the online browser as layers of information composing the virus. It is important for him and his team of researchers to carefully supervise how Ebola is mutating, if at all — and the browser does exactly that.

“We continue to work on it, but the work is less intense now,” Kent said.

The Ebola Genome Browser is a tool that exclusively combats the virus, which established itself as a threat both in the developing and developed world. The browser is intended to aid researchers who are interested in working toward finding a vaccine to help stop the spread of the Ebola virus. 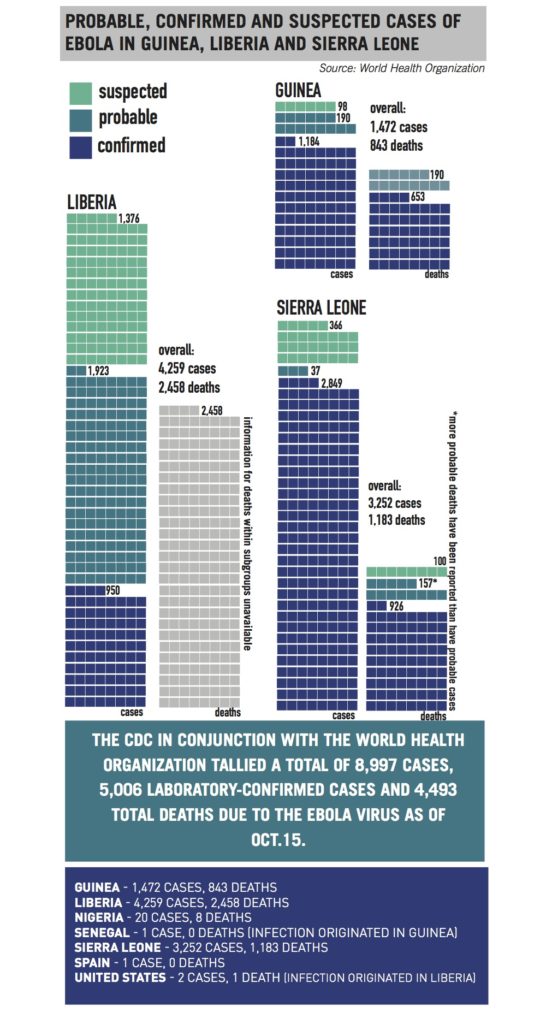 “In the absence of vaccines and treatments, all you’ve got is quarantine, it’s like a forest fire,” Kent said. “One person can stomp it out with their feet when it starts, a fire crew of two or three can take care of it, but by the time it’s miles and miles, it gets harder and harder.”

The 2014 Ebola epidemic is the “largest in history, affecting multiple countries in West Africa,” according to the Centers for Disease Control and Prevention. News broke on Sept. 30 of a patient who was diagnosed with Ebola in the U.S. The patient was traveling from Liberia and died on Oct. 8.

Kent said he was “already well on alert” before the first U.S. patient was diagnosed.

“I was very scared and I continue to be. It’s more of a concern to me than global warming, HIV, anything,” Kent said. “It is a very contagious disease. It may not be quite as much as measles, but it’s much, much more contagious than HIV. It is approaching the flu.”

However, Haussler supports President Barack Obama’s urgency to address the safety concerns surrounding Ebola. The U.S. will handle screenings at select airports on passengers traveling from the regions in which Ebola is present, including Liberia, Sierra Leone and West Africa.

“I would urge people to keep an eye on this epidemic [and] spread knowledge rather than ignorance about it,” Kent said. “I’m trying to get the word out to people that if things don’t go right, it will be an immediate danger probably in about a year.”