In the past year, President Barack Obama vowed to tackle the issue of sexual assault nationwide with the “It’s On Us” campaign. Even more recently, Gov. Jerry Brown passed State Bill 967, or the “Yes Means Yes” bill, to implement affirmative consent policies in California colleges. UC President Janet Napolitano also launched a sexual assault task force to combat the issue on UC campuses.

Along with many other colleges across the state, UCSC is making strides to facilitate new policies and improve those already in place. 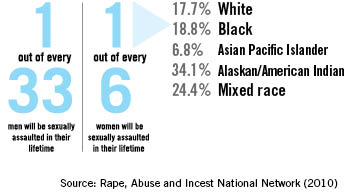 Tsugawa will also take on another role in the facilitation of a new unit on campus. The Harassment and Discrimination Prevention and Investigation Unit (HDPIU) will be responsible for fielding all reports from the campus community.

UCSC will be the second UC, behind UC Irvine, to streamline the reporting process. Tsugawa said HDPIU will provide the campus community with a better understanding of issues surrounding Title IX violations by having all reports and questions come to one place instead of trying to figure out where to get help.

The UCSC Police Department (UCSC PD) and the Dean of Students Office will team up with Title IX officials. UCSC PD Chief Nader Oweis hopes the collaboration will foster trust among students that crimes are being handled adequately.

“We’ve worked diligently to educate and train faculty, staff, students and parents about the resources we have on this campus. We’ve also worked to provide advocacy and investigate — both on the administrative side and the criminal side — allegations to the best of our ability because there are times when people don’t want to come forward,” Chief Oweis said.

Both Oweis and Tsugawa said changes in legislation and policies will help encourage others to report crimes and participate in the discussion about sexual assault.

“Right now we are in Phase Two. We’re developing the programming and policies, bringing about consistent language, determining how we’re going to comply with all of the new laws — federal or state — that passed and making sure we are consistent throughout the state of California.”

A January deadline has been set for Phase Two and the collective offices plan to move forward with Phase Three after they assess both the recommendations and the needs of the campus.

Tsugawa said the Title IX office hired a half-time administrative analyst to set up a new database to coordinate with other systems on campus like student conduct. The office also plans to hire an investigator for the campus by the beginning of next year.

Aside from the changes the campus should expect this year, UCSC can also expect continuity from measures already in place. One such measure is Haven, a mandatory training for all incoming students that consists of online and in-person components. Implemented only a year ago, Haven provides students with information about consent, risk reduction, bystander intervention and other topics regarding sexual violence.

Although Haven is geared toward new students, there are also other trainings throughout the start of the school year. Trainings and discussions are provided for employees, staff members and others who want to know more about how to handle cases of sexual assault or violence.

“All of the staff or student staff who are in a position of responsibility on campus need to understand what to report, whom to report to, what resources to offer students and what their role is in the procedure,” Tsugawa said. “Sometimes it requires teamwork and doing some triaging with the students to make sure they’re getting all the services they need and that the reporting that’s required is happening.”

In addition to mandatory training, students can also sign up for supplementary trainings and workshops offered twice a quarter. Caitlin Stinneford, UCSC’s sexual violence prevention educator, who helps organize and conduct trainings, said there was an increased amount of student sign-ups and interest at this fall’s trainings.

“In the past we’ve normally had between 15 to 25 people who come to any of those trainings and for this one, we had to waitlist people after we had 50,” Stinneford said.

Stinneford said the influx of sign-ups is a result of the growing interest in education about sexual assault. The demand for more dialogue, she said, was catalyzed by new legislation and increased awareness of the issue.

Though the Clery Act requires college campuses across the U.S. to publish their statistics on crime, they are only required to disclose information when a crime occurs on campus-owned or controlled property.

Stinneford said this number is not indicative of the crimes that occur throughout the campus community. She said her office observed a significant increase in reports from students throughout the first weeks of the quarter.

“Since the middle of summer I have seen 27 people already and [her co-worker] saw another six. Of those reports that would count in the Clery report for next year of my 27, I think there are five, maybe four, that actually fall within campus geography and that’s where that number gets tricky,” Stinneford said.

Clery Reports from several other UCs show increased reporting is becoming a trend throughout California.

“If we do our efforts well, we should see an increase in the number of people coming forward about sexual assault in the next few years. That’s not because it’s happening more but it’s because more people are seeking services or identifying what happened to them as sexual assault or as a non-consensual experience,” Stinneford said. “That’s also very hard to do because I don’t think our culture teaches us very clear standards of consent.”