Measures L and K will establish a cannabis business tax of no more than 10 percent — 7 percent when enacted — in jurisdictions within the city and county respectively, to be effective January 2015.

“The vast majority of the collected tax will go to public safety and parks,” said Santa Cruz councilwoman Cynthia Mathews. “We’re always in need of revenue. It is not intended in any way to discourage a patient’s access to medicinal marijuana.”

There are more than 10 dispensaries in the unincorporated regions of the county, which would be taxed if Measure K receives a yes vote in November. The city of Santa Cruz however only has two dispensaries, which would also pay a business tax of 7 percent if Measure L passes.

Both measures, if passed, 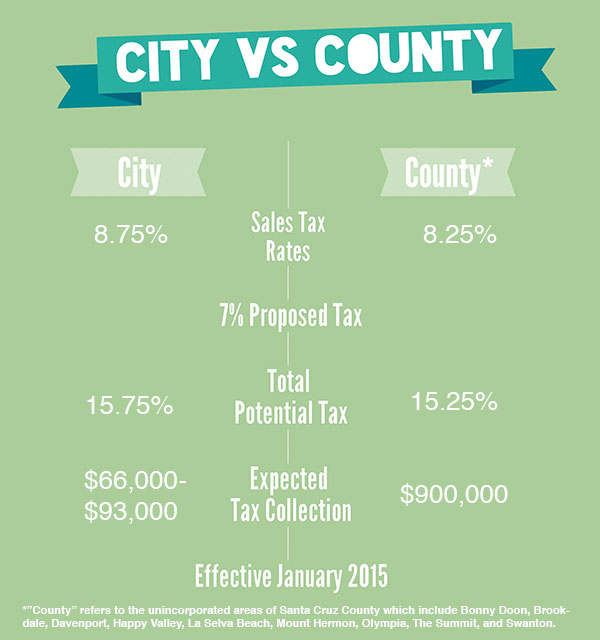 “What we’re seeing in illegal cultivation activity is environmental destruction, illegal timber harvesting, illegal grading, heavy use of chemicals and the taking of water from streams and rivers,” Leopold said.

“An overwhelming majority” of these illegal growing-operations are in forested areas and there are currently 88 complaints regarding illegal cultivation in the San Lorenzo Valley and Aptos Hills area, Leopold said.

Some of the dispensaries welcome the tax and believe it will legitimize their enterprise. Others claim the tax will cause an undue financial burden on smaller organizations seeking to provide medicine to patients in an affordable manner.

Granny Purps, a dispensary located in the unincorporated part of the county, welcomes the upcoming measures, saying the tax will help legitimize medical marijuana.

“I’ve always believed we should pay taxes on medical marijuana to help support the community. It’s a wonderful deal to help with enforcement of illegal activities that have to do with our industry,” said Granny Purps CEO JD Black. “It’s good to get rid of the bad apples so people realize how important our industry is to the world and our county especially.”

“Another tax is not an issue at all. We’re not going to pass the 7 percent tax to our patients, we are going to absorb that,” Black said. “I don’t believe our patients should pay the extra tax.”

Some of the newer dispensaries, like CannaCruz — accepted within the city limits earlier this year — aren’t financially able to absorb the additional tax and believe it will entice patients to seek illegal sellers for a more affordable price.

“This is going to push more people toward the black market and the people they are talking about wanting to bust,” said CannaCruz owner Grant Palmer.

Due to a 2010 city ordinance restricting dispensary grow- operations, dispensaries like CannaCruz cannot produce any of their own cannabis products. They rely solely on members of their collective to sell their “leftovers.” Comparatively, Granny Purps grows roughly 70 percent of its cannabis products.

In the county, a card-holding patient is allowed to grow up to 100 square feet of medical cannabis. They can sell their “extras” to dispensaries if they are a member of its collective.

“Those grows that are causing environmental damage should be shut down, but that’s already illegal. They can already go after these people,” Palmer said. “It’s a medicine, it shouldn’t be taxed. No other medicine is taxed like marijuana is.”

While medical marijuana has been legally sold to prescribed patients in approved dispensaries in California since 1996, it remains illegal under federal law, which prohibits the cultivation and possession of cannabis.

A local grower, who preferred to remain anonymous, agrees the additional tax helps legitimize its medical purposes, but also said the price increase will push patients toward the black market.

“From a small time grower’s perspective, most of what I grow is for friends and family,” the grower said. “A lot of people in the city here have friends and family who they can reach out to to get marijuana outside of the clubs.”

The grower agrees the county should go after grow-operations damaging the environment, but said it is a “waste of resources” to go after other “unharmful” growers.

“As long as their operations aren’t damaging our environment, then who are they hurting?” the grower said, referring specifically to cannabis plants.

“There’s so much weed going through this town from Humboldt and other places. Cracking down on the grow-ops in this town won’t stop the flow of off-the-books products,” the grower said. “It being partially legal and trying to crack down on the illegal parts is too fragmented. It needs to be federally taxed and regulated, then we can make some real changes.”