Calling for a Safe Return

Candles illuminated the night as the community gathered at the Town Clock in downtown Santa Cruz to honor the 43 university students who were kidnapped in Iguala, Guerrero, Mexico over a month ago. Signs reading, “They took them alive, alive we want them back” and “43 students taken, 43 students returned” were scattered among the sea of people.

“We understand that having a vigil may not have a big impact on what’s happening in Mexico, but hopefully we can attract politicians or we can attract the attention of others who can make that impact,” said fifth-year Latin American and Latino studies student Martha Ortega.

The 43 students of the Normalista Ayotzinapa, one of the few remaining universities in Mexico that provides free and secular education, were headed to protest government education reform when they were intercepted on Sept. 26. The former mayor of Iguala, his wife and the city’s former public safety director — now fugitives — are suspected to have given the orders. Police opened fire on the students’ buses, killing six people, including three students and three bystanders and the rest of the students were arrested, according to the Los Angeles Times.

“The reason these students disappeared in Iguala, Guerrero is because they were university students who were questioning the system,” Ortega said. “Unfortunately, that has become an issue for the Mexican government because these are the types of schools that foster critical thinking.”

After the disappearances, 57 people were taken into custody, including police officers. The police handed over some of the students to the Guerreros Unidos cartel and ordered the students’ execution, according to Al Jazeera.

Heads bowed in silence — a moment given to the 43 missing students. A young woman in the front of the crowd broke the silence when she called for the crowd to yell, to not fear the noise people were capable of making. 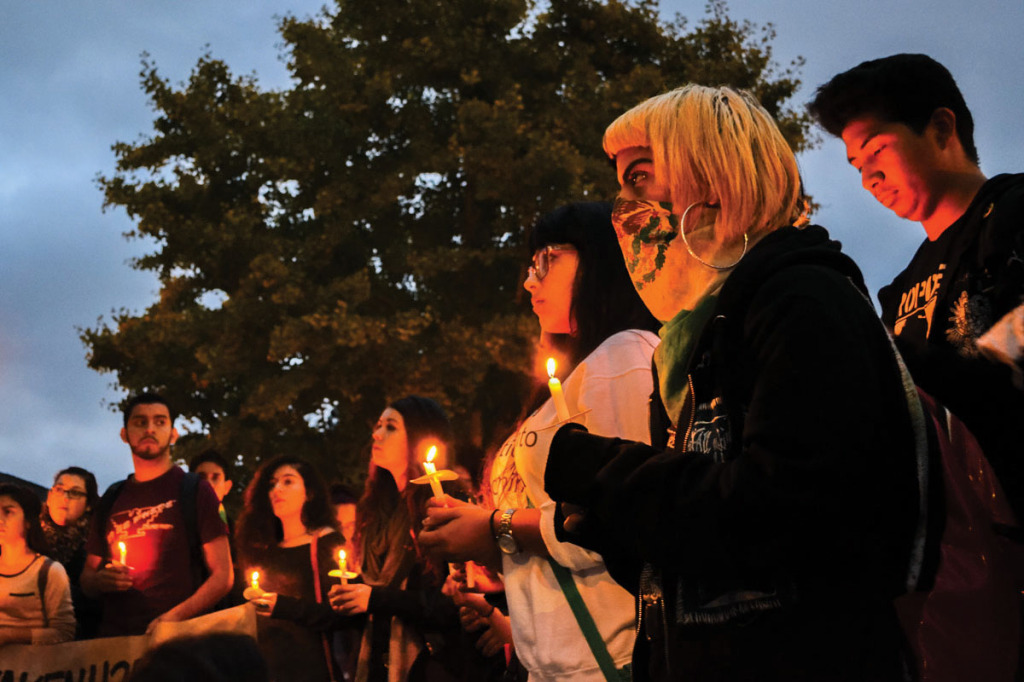 The vigil brought people from different backgrounds and communities together. For some, it was the first time hearing about the issues plaguing Mexico. For others, it was an all too familiar tragedy.

“I’m not originally from Mexico, [but] my parents are and I did live there for some time in Zacatecas, so this comes home for me,” said third-year psychology student Josue Ayala. “It’s not right. I don’t care where these students are coming from, these are 43 college students who are, or were, about my age. Something needs to be done. Someone needs to listen.”

Investigators uncovered 11 different mass graves with a total of 38 bodies, which have not been identified as any of the missing students. Mexican authorities said most of the current suspects being detained belong to the Guerreros Unidos cartel, who were in collusion with local police and politicians. The others in custody are police officers, one of whom confessed to killing or witnessing the killing of several students, according to the Los Angeles Times.

The Mexican government recently offered a reward of 1.5 million pesos — an equivalent of $111,000 — for any information regarding the whereabouts of the students. The vigil’s attendants shared contempt regarding Mexico’s lack of action.

“Money is bullshit. What we need is change in the institutions, in the structural way of ruling a society,” said Joanna Beltrán Girón, a second-year sociology and psychology major and co-chair of UCSC’s Union Salvadorena de Estudiantes Universitarios (USEU). “They’re trying to compensate lives with money. That’s not the real issue. The real issue is very [much] rooted in history and political interest. Money is not enough. Money is not going to compensate a life.”

Latin American and Latino studies professor Hector Perla equated the Mexican government’s reward as a symbolic gesture of trying to wash their hands of any wrongdoing.

“If I kill your family and then I offer a million dollars to find the body, how is that justice?” Perla said. “Justice is what is needed and that implies holding the government of Mexico responsible for the violation of human rights it represents, particularly the involvement of the state actors in perpetuating that crime.”

Perla calls the disappearance of the 43 university students the smoking gun that revealed that the Mexican government is working to silence political adversaries. He said this event resonated with progressive social movements everywhere.

“This is a moment where this generation can take that consciousness and begin mobilizing in conjunction with the mobilization happening in Mexico,” Perla said. “We can create fundamental, positive change that will hopefully bring justice to Mexico and the Mexican people.”