For some, the 1960s evokes nostalgia for doo-wop music or vintage dresses, while for others the era was the time of African American and Chicano civil rights movements, the United Farm Workers (UFW) Delano grape strike and later in the decade, the assassination of Martin Luther King Jr.

UC Santa Cruz marks its 50th anniversary this year and to kick off the celebration, the university is inviting students, faculty and staff to “Dress Like It’s 1965” on Jan. 15.

In 1965, the campus opened with a class of 652 students. While demographics of the student population in 1965 are unavailable, some students are hesitant about an event that could overlook the historical struggle communities of color and their allies faced — and continue to face — in the education system.

“[The year 1965] is a very big time in black history, but I don’t think that’s what they’re aiming at,” Awad said. “I don’t think they’re going, ‘Oh, what amazing things happened to liberate more people,’ they’re like, ‘Ok, what was our comfortable white university like?’”

Filipino Student Association (FSA) co-chair Kaysi Wheeler said in an email that she supports the 50th anniversary celebration, but said more students, especially students of color, should be invited to participate in the planning process, since they are a significant portion of the campus population.

“It is known by most students from underrepresented backgrounds on this campus that this university was not made for us,” Wheeler said,  “However, over the years I believe we have made a lasting impact that is still growing on this campus, which is why we should be part of representing the university for this celebration.”

UCSC news and media relations director Scott Hernandez-Jason acknowledged the historical context of the era but said our progress should also be considered.

“It was a very turbulent time in the country’s history and the celebration is a time to look at how far we’ve come,” Hernandez-Jason said. “When you look at the student demographics of the campus now, it’s impressive to see where the campus has come from 1965 and that’s the important thing to see.”

The earliest campus demographics available are from 1970 but do not include specifics about the students who attended UCSC. Hispanics/Latinos are in the “other” category for demographics in 1970 because “Hispanic” was not a category on the survey that respondents could choose, Hernandez-Jason said in an email. 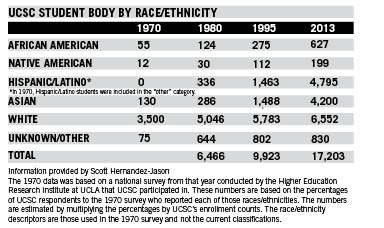 “This is a really good time to look at the history of UCSC, Santa Cruz and the nation and draw comparisons with how much further we have moved,” Awad said. “How many black students were on Santa Cruz’s campus in 1965 and how many are there now?”

As of 2013, UCSC has a recorded student population of 627 African American or black students and 4,795 Latin@ students.

“I’m sure it’s fun for people to celebrate the founding of our university. I’m not trying to be a negative Nancy, but at the same time it’s a reflection point for folks to assess their positionality,” Awad said. “At this time in history, you were given what, and what were other people denied access to?”