Derek DeMarco received a phone call indicating he was a potential bone marrow donor seven years after he registered.

DeMarco, the Crown College coordinator for residential education, is a part of the 8 percent of the small pool of potential matches who have the chance to save a life, according to the national bone marrow donor program Be The Match.

“The requirements of the donor are so minimal compared to the payout for the person who is receiving, assuming the donation is successful,” DeMarco said. “You are quite literally saving someone’s life. Any discomfort I felt is transitory and it would be selfish of me to say, ‘No, I think I’m good.’”

Students can join DeMarco on the Be The Match registry during the bone marrow donor registration drive on Jan. 23 at the Porter College Hitchcock Lounge or the College Nine Namaste Lounge. A simple health questionnaire and a swab on the cheek is all it takes to register if you meet the eligibility requirements.

Although student Sofiga Vijayan did not meet the weight requirement, she decided to volunteer because her friend’s mom has cancer. To make sure the event runs smoothly, volunteers have been working with Crown College programs coordinator Serena Dionysus and associate college administrative officer Sarah Woodside Bury from Colleges Nine and Ten.

Four years ago, Dionysus and Woodside Bury created the event to raise awareness and inform students that donating is a simple process. Dionysus said it is vital to educate students against the misconception that donating bone marrow is extremely painful.

“We want people to learn about the process because there is so much information out there that is old, historical and inaccurate, and it stops people from registering because they are scared,” Dionysus said.

Having a larger pool allo 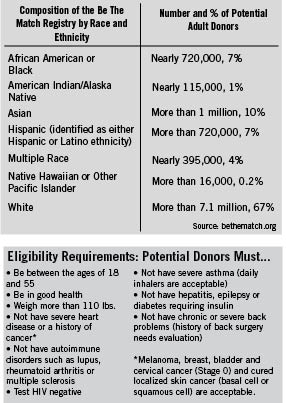 ws for greater diversity in the registry. The most difficult matches are with patients from racially and ethnically diverse backgrounds.

The Be The Match registry contains roughly 67 percent Caucasian potential donors, while ethnic and multiracial potential donors drop to 0.2 to 10 percent. A donor with a matched tissue type is likely to come from the same background.

A bone marrow transplant could potentially save the life of a cancer patient because the bone marrow has special stem cells that produce the body’s blood cells.

There are two ways to donate depending on the treatment needed for the patient. Seventy-five percent of the time, donors are asked to undergo a nonsurgical peripheral blood stem cell (PBSC) donation. To do this, donors are hooked up to a centrifuge that takes blood from their body through a needle on one arm and returns it to the other arm after the appropriate number of stem cells have been separated.

The other 25 percent of the time, donors are asked to surgically donate marrow from the back of the pelvic bone, Dionysus said.

“The procedure has to happen at a time when the patient is healthy enough to receive it,” said bone marrow donor DeMarco. “That depends on what the patient’s state of treatment has been and what kind of chemotherapy has been done recently and if there are any other complications.”

DeMarco’s procedure was pushed back from November 2013 to May 2014 due to complications with the patient.

DeMarco experienced the PBSC donation and said he was injected daily with a stem cell boosting drug called Neupogen five days prior to the donation. Neupogen’s common side effects include nausea, vomiting, muscle or joint pain, bone pain or headaches. DeMarco said he had soreness in his lower back and felt random twinges, but the pain went away a few days after donating.

Over the last four years, more than 1,300 UCSC students registered as donors and at least five donated. After registering, donors stay on the registry until age 60. While it rarely happens, donors can donate up to three times, Dionysus said.

Though students may be nervous about registering, it is not a commitment to donate. When asked if he would donate again though, DeMarco did not hesitate to say yes.

“I’ve been a blood donor for years. It just seems like the thing to do,” DeMarco said. “If you are a person who is capable [of donating] in some way that doesn’t impact your life, that isn’t a hardship, it seems like a good thing to do.”