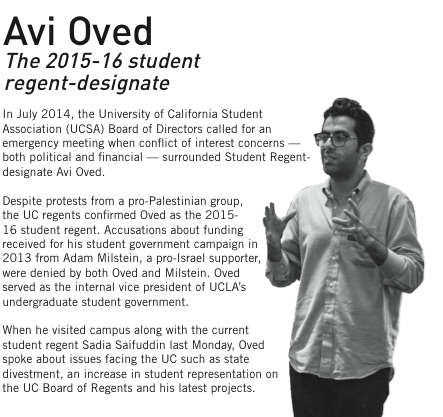 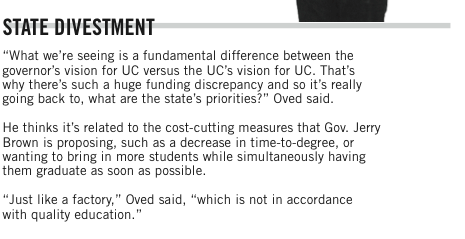 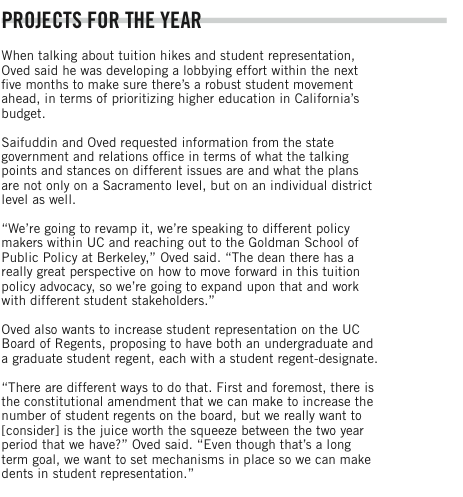 About 20 students gathered at the Cervantes and Velasquez Conference Room at the Bay Tree Conference Center on Monday to learn more about how to become the singular voting student regent on the UC Board of Regents. The student regent position is representative of over 233,000 undergraduate, graduate and professional students throughout the UC system.

Student Regent-designate Avi Oved — who will serve as a UC regent in 2015-16 — and current Student Regent Sadia Saifuddin visited UC Santa Cruz as their third stop on the UC Student Regent Recruitment Tour. They spoke to students about the application process and experience working as a student regent.

The board is made up of 26 voting members, including 18 who are appointed by the governor to 12-year terms and one student regent. The remaining seven are appointed based on their elected positions.

The student regent is the primary advocate for issues on accessibility, affordability, quality and diversity at the UC. Saifuddin was one of seven regents to vote against the November approval of the tuition increase plan.

“Any time there is any kind of financial problem with the UC, the UC automatically thinks of raising fees for out-of-state students as a solution,” Saifuddin said. “That’s not a long-term solution.”

Fourth-year cognitive science major and SUA Vice Chair of Internal Affairs Kaysi Wheeler said she was interested in applying for the position but as a senior, she does not qualify.

“If I do my master’s at a UC as a grad student then I would definitely consider it,” Wheeler said in an email statement. “Being a SUA officer, I have been exposed to UC-wide campaigns being promoted by the student regents, so I can definitely say I’m already exposed to much of what a UC student regent would advocate for.”

Saifuddin said the position is structured to provide one year of “learning the ropes” and being mentored by the previous student regent, followed by the second year of becoming the mentor and having a vote on the board.

“During [the two years], you are receiving the full benefits — you’re getting your tuition paid, travels taken care of — but the first year is basically a training period,” said Assistant Dean of Students Lucy Rojas. “They participate in committees, so essentially there are two students engaged in regental-level work, committees and policy development.”

The student regent position was instituted in 1975 as a result of a University of California Student Association (UCSA) campaign committed to gain a student vote on the UC Board of Regents.

The UCSA Board of Directors, the Council of Student Body Presidents and the Regents’ Special Committee to Select a Student Regent vote on one student to serve as a full UC regent each year.

But in the last 40 years since the student regent position originated, a UCSC student has never held the position.

Second-year community studies and psychology double major Lealani Manuta said she was interested in applying for the position.

“I didn’t know [it] existed and that we have some kind of representation within the regents,” Manuta said, “which is really important not only just as students, but also as students of color because we’re affected in different ways from a lot of different students.”