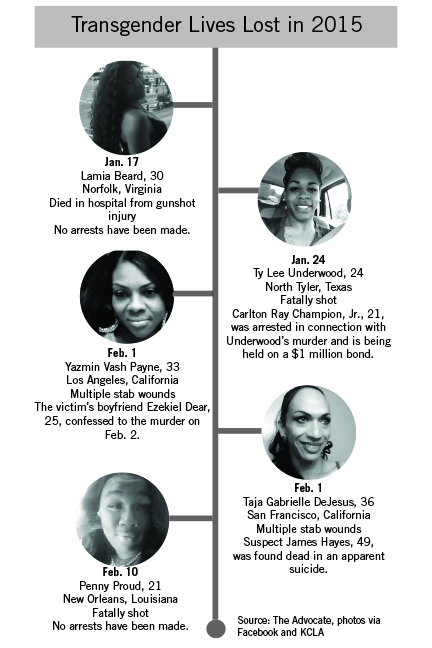 About 40 members of the UC Santa Cruz community gathered at the Oakes Learning Center last Friday to participate in a vigil honoring the memory of the transgender women of color who have been killed in the past month.

The vigil was organized by the Queer and Trans People of Color group in collaboration with campus resource centers. The tone was intimate and somber as members of the UCSC trans* community expressed the fear and anger they felt prompted by the deaths of these women.

“I’m upset and I’m angry about the state of things on campus for trans students. It is unacceptable and I feel called to action by how bad things are,” Pat Henderson said. Henderson is a member of Blender, a campus group for students who identify under the trans umbrella and their allies.

The most recent victim of anti-trans violence is Penny Proud, a trans woman of color who was fatally shot in New Orleans on Feb. 10. In 2014, 13 murders of trans women of color were reported in the United States and from Oct. 1, 2013 to Sept. 30, 2014, there were 226 reported murders of trans persons worldwide.

After some opening remarks offering context for the night’s vigil and placing violence against trans women in a global context, the floor was opened to attendees to share their thoughts with the request that trans-identified individuals speak first.

“How many more trans people have to die before the general public realizes trans lives matter too?” one student asked.

Throughout the night, a slideshow featuring the names and photos of the trans women of color was played on a loop. Cardboard signs were posted around the room with phrases that echoed students’ sentiments like “#translivesmatter” and “We aren’t safe.”

One student explained that violence against trans people manifests itself in different ways. The isolation and harassment trans individuals experience, for example, can lead some to commit suicide. Attendees were urged to honor the lives of the women who have passed, but to also use the moment to look at the systematic oppression of transgender people causing these deaths.

“I am happy that the trans community on campus was open to being here tonight because I wanted them to take over the space,” said event organizer Josue Ayala. “It was really for that purpose, along with honoring the people [who] have passed away.”

About halfway through the night, there was a stark shift in the conversation. Students decided it was not enough to talk about how they felt and began brainstorming how to better address trans issues on campus. Almost immediately, the atmosphere went from one of silent mourning to a call to action.

Students aired a number of grievances, including the university’s lack of resources, such as all-gender multi-stall bathrooms, a trans resource center and safer housing for trans students — as gender neutral living is offered to cisgender students.

From Ayala’s perspective, the lack of resources for trans students on campus inhibits their academic performance.

“These are all things correlated to people trying to be successful on campus,” Ayala said. “If these things aren’t met, how do you expect people to be successful academically? You come here with the purpose of being academically successful, but if you don’t have these personal needs met, if you don’t feel comfortable in the space you are occupying, it makes your academic journey so much harder.”

Students also touched on the importance of having allies in addressing and rectifying the struggles the trans community faces, both on and off campus. Rose Eccles, also a member of Blender, emphasized the need for allies of trans people to come forward and urged people to take trans issues seriously, rather than leave the labor to trans women.

“An ally is someone who takes action. That’s why it’s a verb,” Eccles said. “It’s one thing to show up here and show your support with a candle and be sympathetic toward people who have been killed, and it’s another thing to go home and make a change for the better so that this can stop … That’s what an ally is — anything else is not an ally.”

* Trans is an umbrella term used for individuals who do not identify within the gender binary.