Update 3/13 9 p.m.: Assistant Dean of Students Lucy Rojas upholds two of the students’ suspensions because “there is a reasonable cause to believe [their] continues presence on campus could lead to a repetition of the behavior for which [they] were placed on interim suspension.”

After spending nearly five hours anchored on Highway 17, locked to 700-pound cement-filled aluminum garbage cans in protest of the UC tuition increase and police violence, six UC Santa Cruz students were “disentangled” by police officers, arrested and driven to the Santa Cruz County Jail. Though initially charged with one felony and three misdemeanor charges, the students faced one more disciplinary action upon arrival at the jail’s garage — suspension from the university.

Before the students were formally charged at the jail, a police officer handed each student a letter from a UCSC student conduct officer and told them they were suspended for two weeks. However, the conduct officer didn’t specify an end date for the suspension in the letter, and only said they were banned from campus “until further notice.”

Civil rights attorney Dan Siegel, legal advisor to the six students, has spoken to Michael Troncoso, UCSC’s chief campus counsel, about the suspected blurred legality surrounding the suspension. Siegel was a prominent student-activist during his time studying law at UC Berkeley in the late ‘60s and early ‘70s. In 2011, he resigned from his job as the legal advisor for then-mayor of Oakland Jean Quan because he didn’t support her use of police against the Occupy Oakland movement.

Siegel outlined two ways in which the university’s interim, indefinite suspension applied the UCSC’s Student Code of Conduct illegally and unconstitutionally — a denial of due process and discipline for off-campus activity.

“Students are being prosecuted in court just as other people who are not students, so this becomes a double punishment for students who are receiving both charges in court and university discipline for the same actions, and that’s unusual,” Siegel said. “I’ve represented students at many UC campuses for a long time, and this is an unusual step that they’re taking.”

However, UCSC’s News and Media Relations Director Scott Hernandez-Jason said, “There are checks and balances at every step,” and that any student is given an opportunity to appeal after being subject to discipline. He cited the Family Educational Rights and Privacy Act of 1974 (FERPA) as the reason university officials are not permitted to discuss student records, which includes disciplinary matters.

“Due process doesn’t mean no consequences,” said Hernandez-Jason, who also replied on behalf of UC lawyer Michael Troncoso. “It’s a right to a fair process and a meaningful opportunity to be heard, which is what our standard is for any student in any case.” 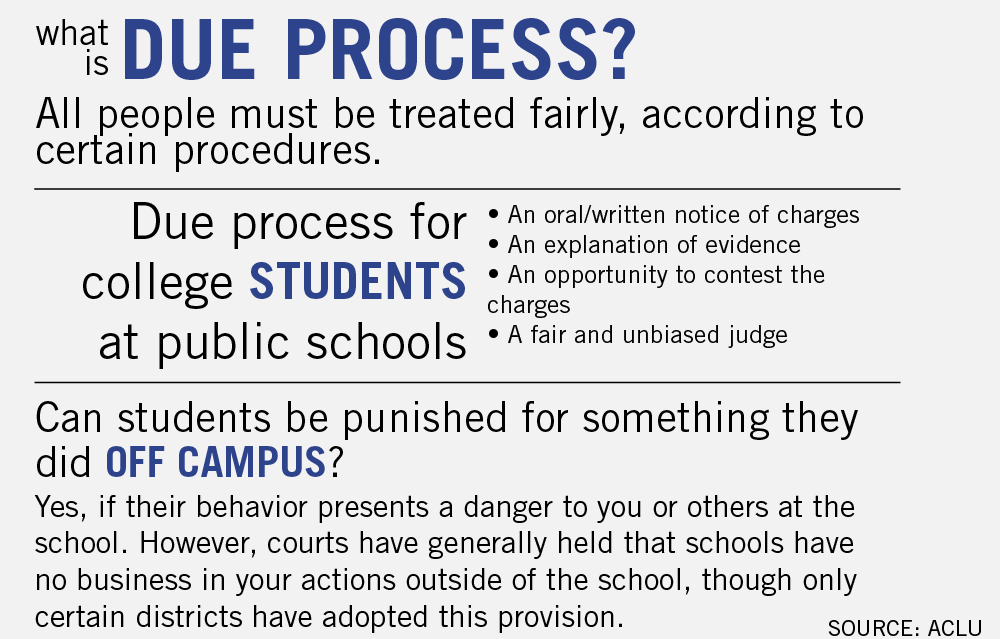 Assistant Dean of Students Lucy Rojas said in an email that due process for interim suspensions means “disciplinary action is an immediate removal of a student from the campus community, however the student has the right to appeal an interim suspension. This would be due process.”

“Where it significantly impacts the community in which we live, off-campus conduct is properly subject to the university’s student conduct process,” Hernandez-Jason said.

On March 10, Student Union Assembly (SUA) passed a “Resolution Denouncing the UCSC Administration Unconstitutionally Denying the Right to Due Process to the Highway 17 Six” to condemn university judicial action. The resolution states that the University’s decision to suspend the “holds zero precedent,” and the formal misdemeanor charges of causing a public nuisance and resisting arrest are not violent charges, as the protest “was a peaceful action.” The resolution passed 26-4-2.

The “Highway 17 Six” are banned from campus, which means those of the six who live on campus are houseless. They are also all without access to the dining halls and Student Health Center. Siegel said to ban students from campus before they have been found guilty of any offenses is “extremely problematic” and backward to the presumption of being innocent until proven guilty. He called the suspension an overreaction by the university, similar to what renowned UCSC feminist studies professor Bettina Aptheker said in an email to City on a Hill Press and in a letter to the editor to the Santa Cruz Sentinel.

“It is very unfortunate that the UCSC administration acted in anger and probable embarrassment about the protests and was perhaps also responding to outside political pressures,” said Aptheker, who worked on Angela Davis’ defense team in 1971. “Whatever the cause, I urge administrators to reconsider this precipitate action, and bring themselves and the campus in alignment with established laws governing student disciplinary procedures and their entitlement to due process.” 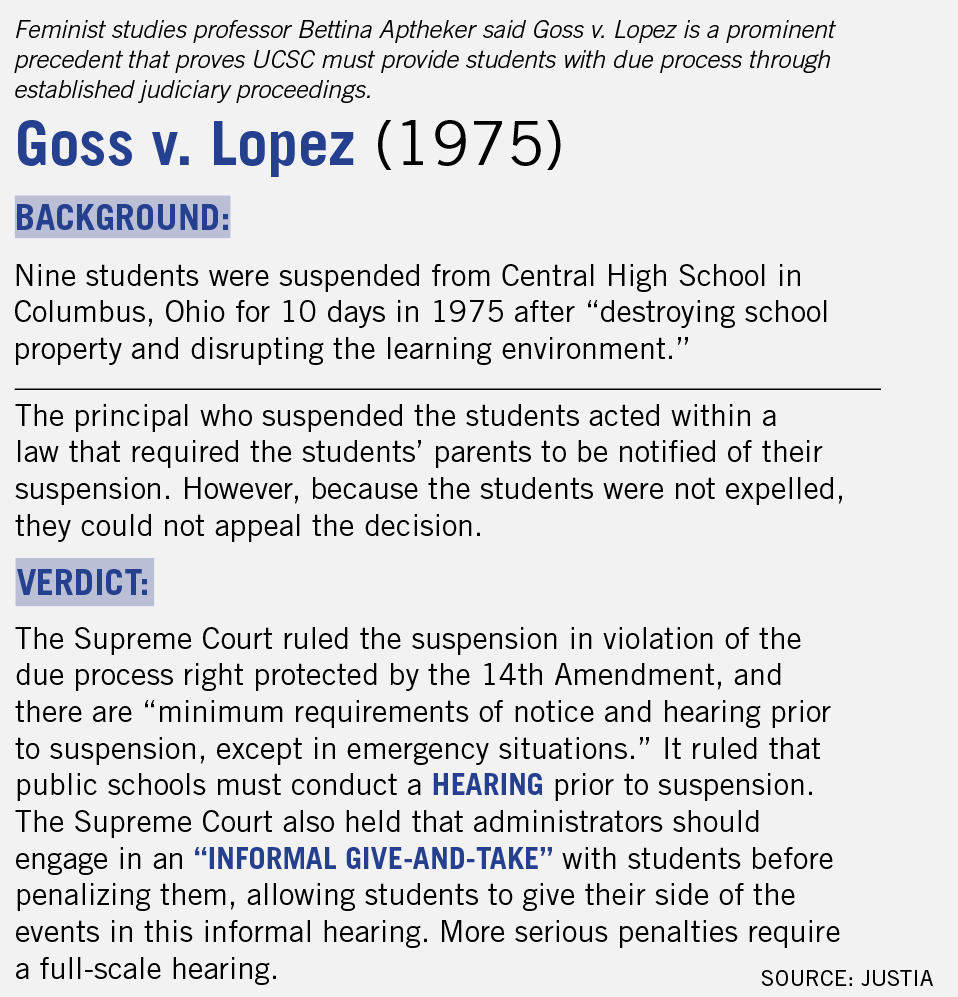 She said that, without a reconsideration, the university may soon find itself “entangled in lawsuits and legal wrangles that will go on for a considerable time much to its own detriment.”

Siegel said there is the potential for the six students to sue if he can prove their constitutional rights have been violated.

On Tuesday, three of the students met with Rojas to make their case to lift the interim suspension, and allow the students to move back into their on-campus housing and return to classes for finals week. The suspension letter said the students pose a threat to other students at the university, which the students fought to disprove during their appeal.

The other three students will have their hearings by the end of the week. Politics professor Dean Mathiowetz, who was at two of the hearings as the students’ “support person,” said Rojas has until Friday to make a decision.

Mathiowetz said there will be disciplinary hearings next week, which will determine what long-term sanctions the students will face. He said he is unsure how this process will work, given these students are also facing court charges.

“What they are really able to talk about in those meetings and how much they can really defend or speak to, or even be allowed to participate in shaping the narrative about what’s going on, seems like it could be really compromised by the fact that they still have a court proceeding against them,” Mathiowetz said.

On March 5, four of the students arrested pled not guilty to the two misdemeanor charges, and were released after spending two nights in jail. All six students will appear in court again on March 17, and the two who were released on March 4 on bail will be arraigned.

While the questions regarding the ethics and legality of the university’s application of the Student Code of Conduct persist, students’ arraignment dates and disciplinary decisions approach this week and the next.

“These kinds of questions are always important to be raising and thinking about and talking about whenever the state, or some relatively independent body that has a lot of power and not a huge amount of oversight, like the university, begins to focus its disciplinary power on particular individuals,” Mathiowetz said.