Following 20 minutes of public comments during the UC regents meeting on Wednesday, about 30 students, mostly from UC Berkeley, stood on chairs in the forum section and threw fake money into the air toward the regents, chanting “Raise up Richmond, not tuition” and “Put people over profit, and regents step off it.”

The demonstration was in protest of tuition increases and the UC’s failure to sign a community benefits agreement for the Berkeley Global Campus (BGC) in Richmond, California. The students were quickly met by about 15 UCPD officers, some in riot gear, threatening arrest upon remaining in the building.

“What’s really dear to me is direct action — disrupting things and being a disturbance. What we did — standing up, throwing the money, taking our clothes off — it was a spectacle, and they were really upset about it,” Butler said. “Instead of really coming and working with us in a way that’s conducive to both us and them, they just put it off and put it off. They would rather get the cops to come and make us be quiet.”

Gov. Jerry Brown was not present during the public comment section, and many speakers voiced their desire to address him.

The BGC is proposed as a UC Berkeley satellite campus, which UC Berkeley Chancellor Nicholas Dirks says will eventually serve 10,000 students and faculty to “conduct interdisciplinary research on climate change, world health, big data and urban studies.” A community benefits agreement guaranteeing affordable housing and health benefits for current Richmond residents, along with the promise that their jobs will not be outsourced, has yet to be signed by Dirks or the regents.

UCSC alumna Edith Pastrano said in addition to the tuition increase, the UC’s refusal to sign the community benefits is yet another example of the system’s privatization. She said the community benefits agreement is “not unreasonable,” and is the only way to legally bind the UC to protect Richmond. Pastrano, who grew up in Richmond and moved back after graduating in 2012, called the demonstration during the regents meeting a sign of solidarity between UC students and Richmond community members.

“With this campus coming to Richmond, it will really drive economic grounds for the future of Richmond, but the resonating question is — for whom? For people who will be displacing the Richmond community that’s existing or for the people in the community?” Pastrano said.

Richmond resident and single-mother Ernestina Sandoval came straight to the regents meeting after her shift at McDonalds ended at 6 a.m. During the public comment section she spoke about how by failing to sign the community benefits agreement, the UC is not protecting affordable housing, but rather exploiting it.

“The regents have that power over us, but we are not afraid of them and we need our voices to be heard,” Sandoval said outside after the demonstration. “We’re all fighting for a different cause, but we’re all fighting.”

UC Berkeley third-year Kristian Kim started the initial chant to spark the rally. With “student debt” written across her chest, her and other UC Berkeley students who organized the demonstration also stripped down to symbolize giving the shirts off their backs to higher education, and started chanting.

She said the lack of a community benefits agreement is hypocritical to the university’s public mission statement, which strives for “long-term societal benefits” and public services.

“It’s a ridiculous amount of disrespect for the residents of Richmond and the students of the UC, who are asked to pay more for an education that is qualitatively becoming less in terms of class size, professor time,” Kim said. “The impunity and disrespect of which the university operates is intolerable.” 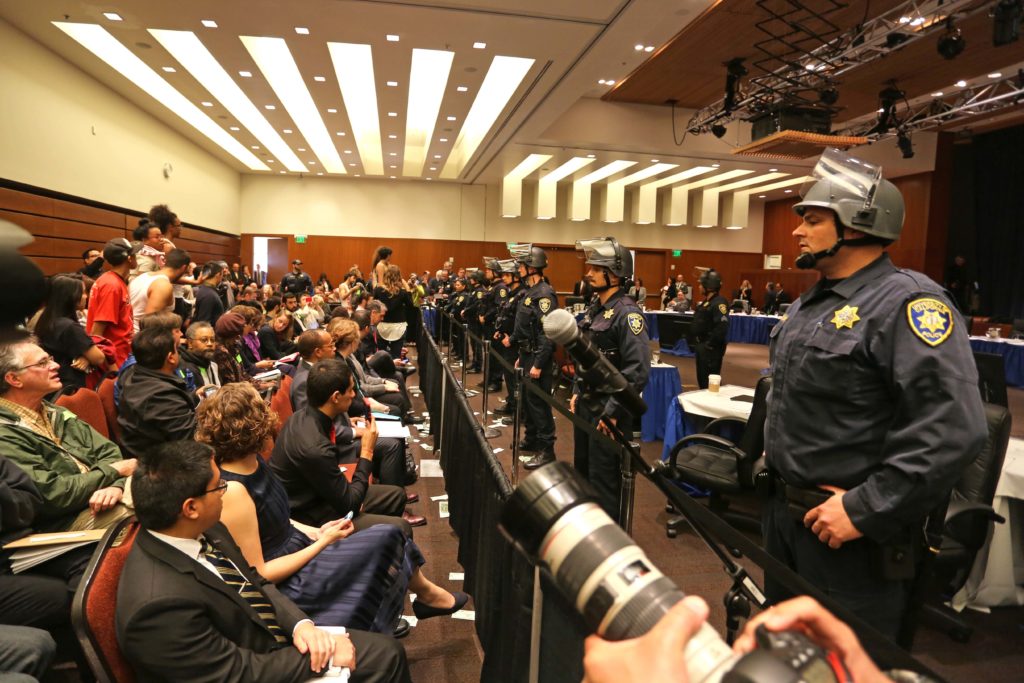 About 15 UCPD officers who arrived after the demonstration started told the students they had less than five minutes to leave the building before they would be arrested. Most officers were wearing riot gear. No arrests were made. 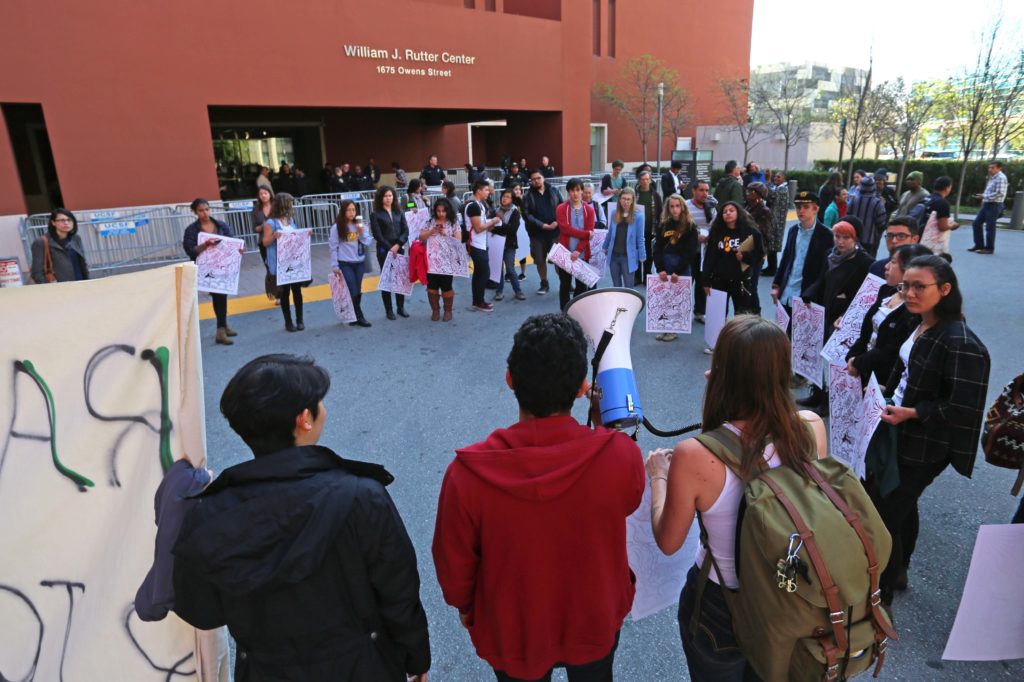 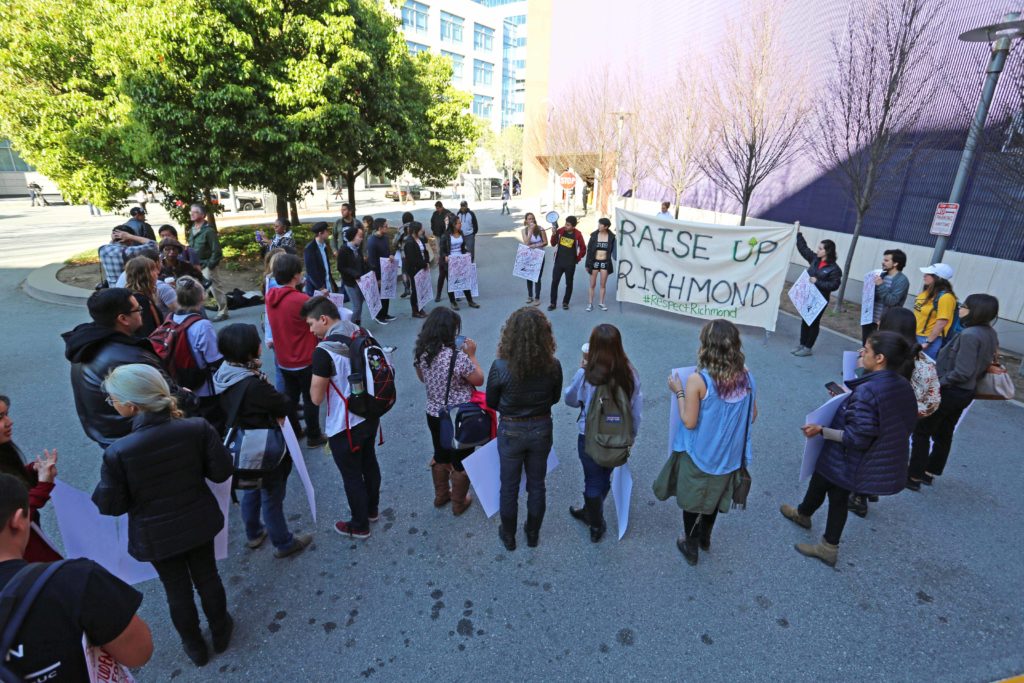 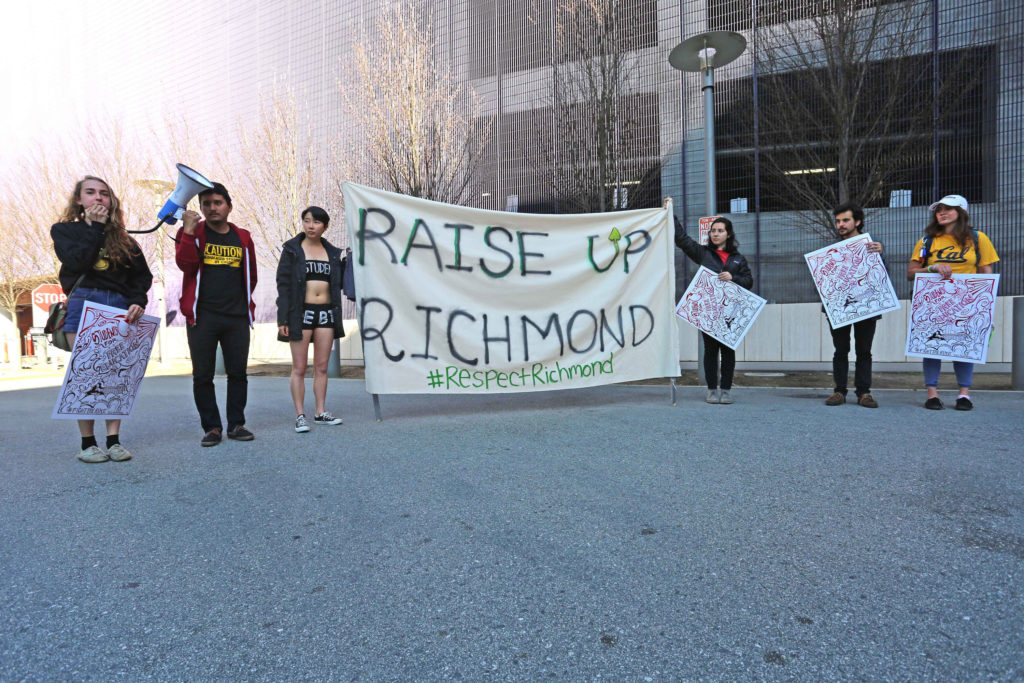 After the protesters exited the meeting room, they marched in a circle outside the building and continued chanting. About 50 people rallied outside to continue conversations about their concerns regarding the UC system. 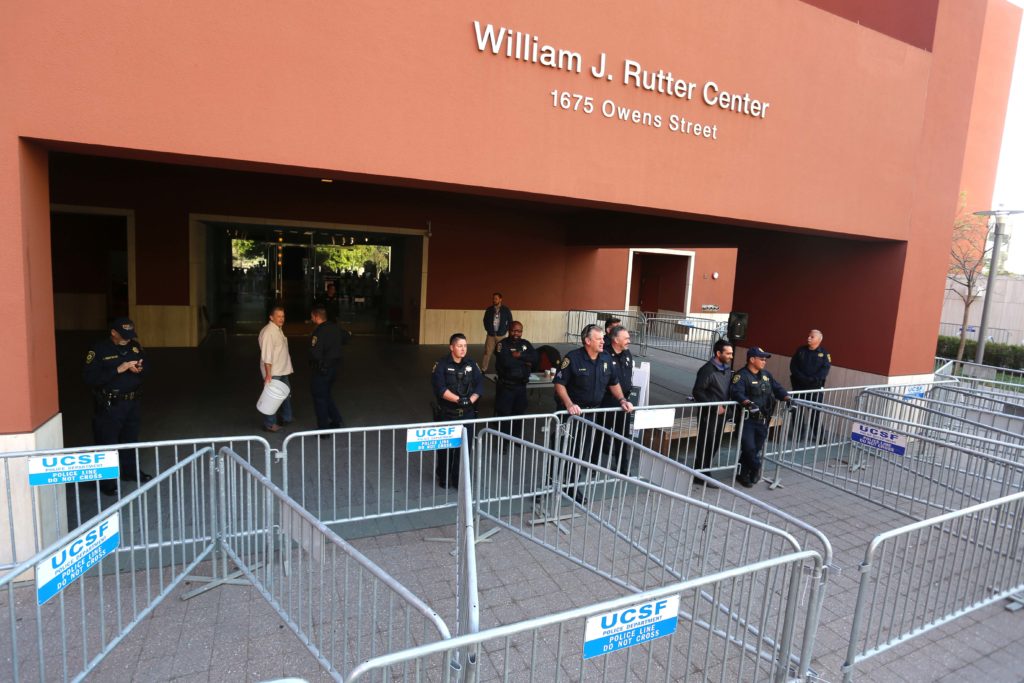 UCPD officers placed barricades around all of the entrances to the Conference Center at the UCSF Mission Bay campus after the protesters left the building. 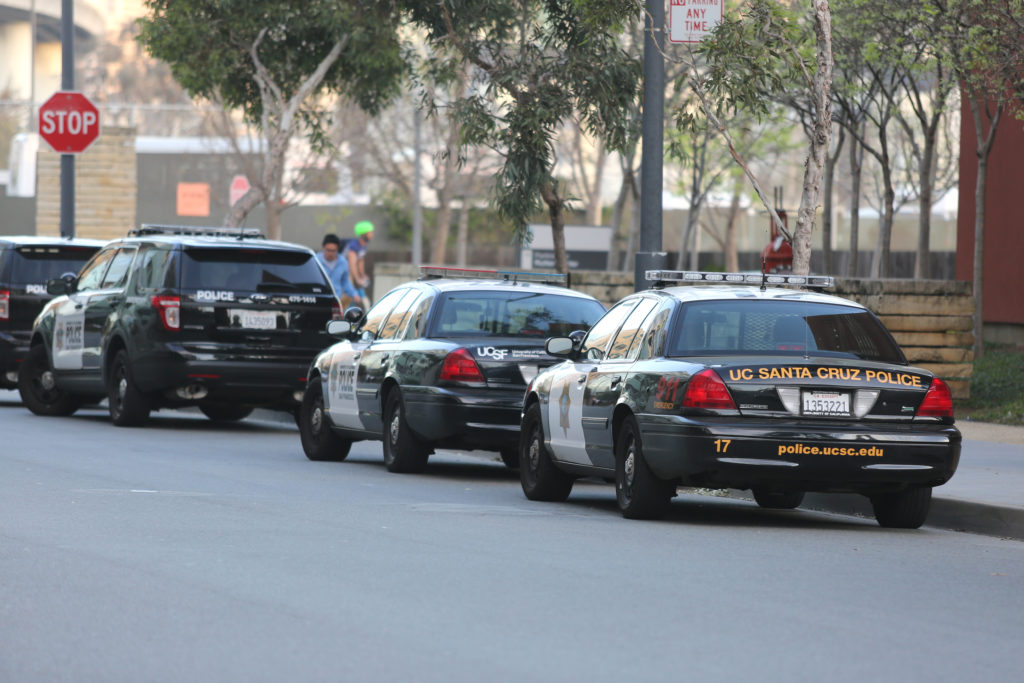 UC Santa Cruz police officers were a part of the UCPD presence at the UC regents meeting on March 18. About 15 UCPD officers arrived following a short student demonstration after public comments. 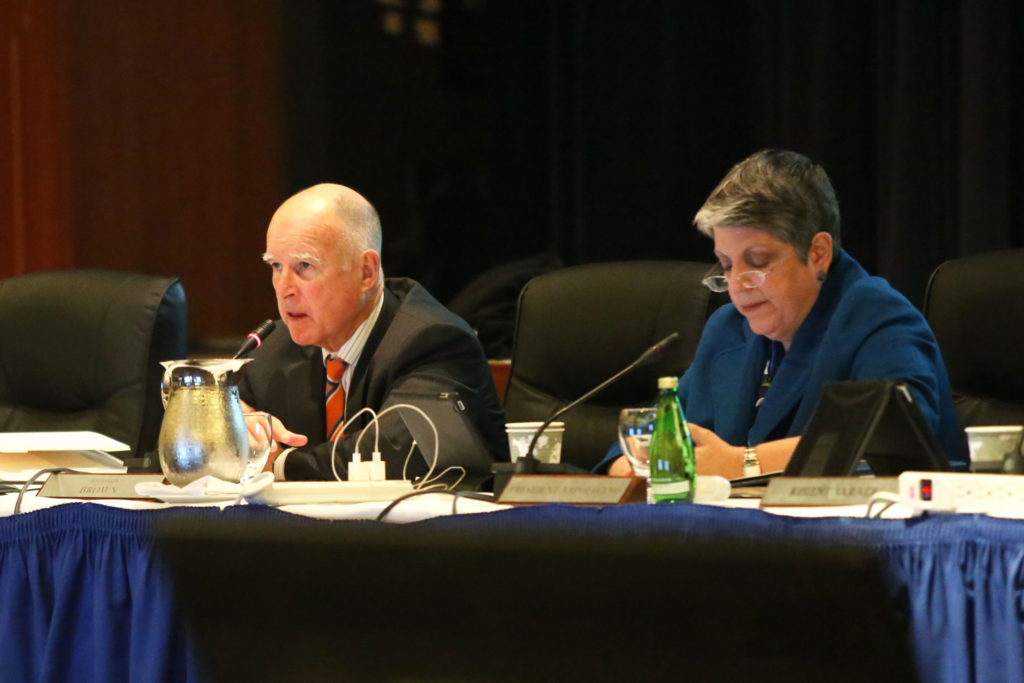 Gov. Jerry Brown arrived shortly after the protesters exited the building on March 18 at the UC regents meeting in San Francisco. Many of the speakers during the public comment section wished to address the governor, but he was absent for the entirety of that portion of the meeting.