Ten Arrested During Protest Against ‘Raid on Student Aid’

Ten protesters, dressed in caps and gowns, were arrested in Washington D.C. on March 27 after a demonstration demanding the rejection of what they deemed “The Raid on Student Aid” — up to $150 billion in cuts to federal financial aid programs such as the Pell Grant, Subsidized Direct Loan Program, Public Service Loan Forgiveness and income-based repayment programs.

The demonstration was organized by the United States Student Association (USSA), which calls itself the largest and oldest student-led organization in the U.S., representing over 1.5 million student members. Over 100 students were involved in the protest, all of whom were participating in the National Grassroots Legislative Convention, an annual convention where students learn about lobbying and organizing on campus.

House Republicans presented a budget proposal earlier this month that would freeze Pell Grant maximum annual awards for the next 10 years at the current $5,775, rolling back an expansion of student assistance proposed by President Barack Obama. 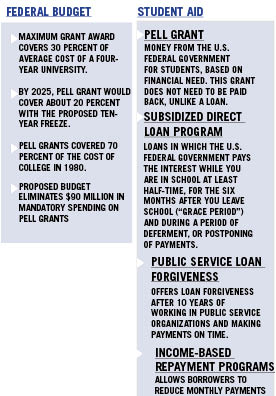 Obama’s proposal included a $30 billion expansion over 10 years of the Pell Grant program and for the maximum award to continue to be tied to inflation. The cuts are a part of a larger attempt to cut federal spending and balance the budget.

USSA President Maxwell Love said in an email statement that the action was successful, but the students don’t necessarily feel heard by their elected representatives. He said USSA sent 20 students to meet with Senate Majority Leader Mitch McConnell, but were denied a meeting.

“The budget passed and the $150 billion in cuts are headed to another round of decision-making so that means we will have to escalate the amount of pressure we put on Congress,” Love said.  “This will be through calls, in-person visits and perhaps more non-violent direct action. And of course, students know a major election is coming up and we will be watching.”

The proposal also changes funding for Pell Grants which would extract money from a discretionary fund, rather than a permanent mandatory fund, leaving it vulnerable to future cuts.

As the elected student government representative of the Office of External Affairs, Cabansay leads a team of student advocates who “work at the local, state and national level to enhance the experience of students enrolled in public education in California.”

Cabansay said the students were denied meetings with at least five California state representatives regarding issues in higher education. When asked if she felt students had allies on Capitol Hill, she said party politics limit how people’s interests are represented.

“We do [have allies] but they can’t do anything,” Cabansay said. “It’s all party politics. When everyone votes only on party lines, you’re not representing your people’s interests. You’re representing your party interests and those don’t always align.”

She said direct action tactics are sometimes necessary to “get your message across” and while there is no guarantee of success, she said the tactic generates awarenesi s “that no other tactic really does.”

“Sometimes a meeting isn’t enough, it’s not going to rally the support you need to have, not just people in positions of power but people who are affected by this,” Cabansay said. “If thousands of students were here, we wouldn’t need for 10 people to get arrested. If you look back at it, why was Prop 30 on the ballot? It was the same year 10,000 students shut down Sacramento.”

Cabansay said UCSC only had four representatives at the conference, one of the smallest among all of the UCs. Budget cuts last year within SUA cut funding from the conference that historically takes about 15 students.

USSA’s petition on MoveOn.org, which calls for a stop to the proposed cuts, has 13,603 signatures as of Monday night.

Last week, seven people were arrested for disrupting the Senate Budget Committee Hearing. After this action, USSA released a statement saying, “If Republicans continue to cross the line in the sand by moving forward with the proposed cuts to higher education, then they should expect to see and hear much more of students next week. The U.S. Student Association believes education is a right and should be free and accessible to all.”

In a public statement, José Luis Santos, vice president for higher education policy and practice at The Education Trust, said the House budget shows that college accessibility and affordability for low-income students isn’t a priority.

“This is the wrong direction for the Pell Grant program,” Santos said. “As is, it barely covers one-third of the cost of attending the average four-year public college. As most recipients come from families earning less than $30,000, limiting the Pell Grant will put college out of reach for many more students.”

In the 2013-14 school year, 9 million students received aid through the Pell program. Almost two-thirds of African American college students and over half of Latina/o students receive Pell Grants currently, according to The Education Trust.

To afford attending UCSC, first-year Andrew Austin is fully dependent on the Pell Grant, Cal Grant and scholarships. Without the aid, Austin was unsure how he could continue to afford school.

“I don’t really have the money to attend this school,” Austin said. “I would probably have to go to community college. The only chance for me to go to college was for me to get scholarships and financial aid.”

Austin said he might have to get two jobs over the summer if aid is cut. He said two of his housemates are in the same position.

“[The government is] playing with people’s future and it doesn’t realize it,” Austin said. “It’s raising tuition, it needs to raise financial aid. You can’t just have rich kids going to college, you can’t have only people who can afford it. It’s cutting people out.”