UCSC dining halls accumulated 650 tons of compost in 2013, compared to only 130 tons of landfill trash. Photo by Alex Posis.
Features 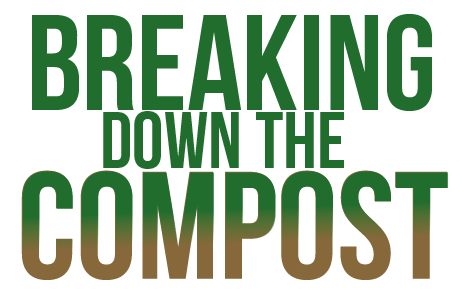 UCSC Dining has steadily improved its composting process since 2008, but problems persist. Even with the help of a proposed on-campus resource recovery facility, UCSC Dining says the only way to achieve a waste-free campus by 2020 is with students’ help.

When the College Nine/Ten Dining Hall unit manager Clinton Jefferies visited UC Santa Cruz’s compost facility in Marina, he saw mounds of mostly clean compost generated by UCSC. There was one fork sticking out of the pile that Jefferies immediately recognized as one from the university, but he didn’t think too much about it.

By the end of the tour, it was all too apparent that the fork was one of many. The facility had separated a pile of garbage that was sifted out of the compost, and Jefferies was standing in front of a “mountain of forks” about 2 and a half feet high.

UCSC dining halls accumulated 650 tons of compost in 2013, compared to only 130 tons of landfill trash. Between sorting compost, sending it to the facility and processing it, composting doesn’t come without its challenges, said Scott Berlin, director of UCSC Dining and Hospitality Services.

“You need a huge infrastructure to compost, and there are a lot of moving parts,” Berlin said. “Now that we have expanded [UCSC’s composting program], it identified how much more there really is out there. Now we are asking how do we reduce the waste? Changing habits is the number one element.”

Students can change their habits in more than one way. Food waste is a huge problem, Berlin said, as many students just take too much food. But students need to better separate their waste when they finish meals and differentiate between compostable food scraps and non-compostable recyclables and even landfill waste.

The process has been changed since that visit almost three years ago, but the problems are still similar in scope. Recently, dining hall workers have taken up the responsibility of scraping dining hall plates and separating utensils to ensure all items returned are compostable.

“People sometimes have no regard for which trash bin was for what,” said former Owl’s Nest employee Kori Crossno. “They just throw all their stuff into whichever bin is the easiest or closest to them, and sometimes they don’t even try. We would find forks, knives, plates and trays in the compost all the time.”

In fall 2013, Chancellor George Blumenthal announced UCSC’s initiative for a “zero waste” campus by 2020. Despite the name, the initiative proposes that 95 percent of all campus waste is either recycled, reused or composted — a big jump from the campus’s current 60.9 percent of waste diverted from a landfill. 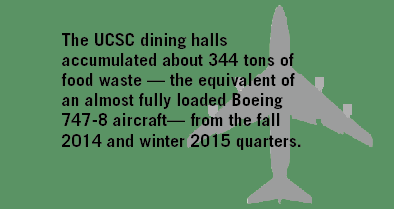 The UCSC dining halls accumulated about 344 tons of food waste — the equivalent of an almost fully loaded Boeing 747-8 aircraft— from the fall 2014 and winter 2015 quarters.

UCSC currently sends 39 percent of its total waste to a landfill, yet 35 percent of this waste does not belong there and can be recycled, composted or reused. UCSC Dining remains confident that if students and staff become better at separating recyclable containers from compostable food scraps, there’s a possibility for the campus to reach its goal of “zero waste” by 2020.

“Dining is feeling that we have done all that we can do,” said Berlin, director of Dining and Hospitality Services. “It is now focused on campus — campuswide.”

Additionally, McHenry Library is experimenting with a pilot program that diverts waste to compost, recyclable bottles, cans and paper and landfill waste where there is a specific bin for each type of waste, and it’s up to the student to separate it.

The Monterey Regional Waste Management facility in Marina, which partners with UCSC, only accepts 50 tons of post-consumer waste per year, yet McHenry’s pilot program alone produces about 51 tons.

If expanded to the entire campus, UCSC would accumulate an estimate of over 700 tons a year that would need to be processed by 2020. The Stevenson, Porter and Cowell cafes currently don’t have composting bins or compostable utensils or napkins in place, often due to cost.

Monterey Regional Waste Management is the closest facility that can process any post-consumer waste while also accommodating the amount of compostable material that UCSC produces.

The dining hall composting process began in 2007 when one compost compactor was installed in the comparatively smaller Crown/Merrill Dining Hall. There are currently two functioning pulpers on campus that compress food scraps and dehydrate them by removing excess water. This process makes the food scraps lighter and allows more food to fit into one compactor. 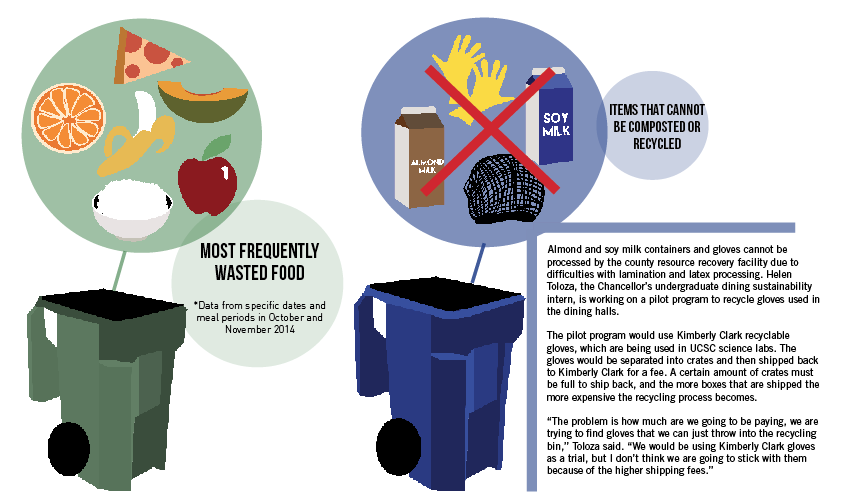 On average, compactors are emptied on a seven to 10 day cycle, depending on the size of the dining hall and can hold about 9 tons of compost. The waste is then trucked 33 miles to Monterey Regional Waste Management for processing. The composting process is cheaper than transporting and disposing the tons of food waste in a landfill, said Jefferies, the College Nine/Ten Dining Hall unit manager.

Each truck load costs about $600 to take compost to Marina from one dining hall alone, said Roger Edberg, senior superintendent of UCSC Grounds Services. Overall, this costs UCSC about $60,000 per year to transport the compost.

Once the compactors are picked up and taken to Marina, the compost is put in an anaerobic digester where the food scraps ferment and methane and carbon dioxide are extracted. The compost is then processed and put outside in narrow piles called windrows to be ventilated.

The compost is kept at a safe 155-160 degrees Fahrenheit so that harmful bacteria is killed but the nutritionally good bacteria is kept alive. From there, the finished product goes to vine crops like grapes and raspberries.

“The county came in and said it was some of the cleanest compost they had ever seen,” Jefferies said. “It took a year to roll out to all of the dining halls and some took longer than others and eventually we got everyone composting similarly to how we do now, but there are some challenges.”

Berlin, director of Dining and Hospitality Services, said a closer facility that can take all of the university’s compost would be ideal, but there are questions that linger around the thought of building an on-campus resource recovery facility.

“What size do you really need and is that really attainable — geographically and financially? How would we get that money? They aren’t expensive to run, but they are expensive to start up,” Berlin said. “That would be the ideal scenario — we are 100 percent self-contained. It would be the perfect world.”

Grounds Services maintains a clean and efficient campus environment. This includes the maintenance of fields, trees, roads and irrigation as well as efficient and sustainable recycling and composting processes.

“There are all kinds of regulatory things that we have to take into consideration,” Edberg said. “In April 2013, we had to do a study about what site would be appropriate. Now we got the approval to design the facility, but we don’t have enough money to build it all — all we have is enough money to put the fence in, bring in utilities and plan for it.”

After two years of research, Grounds Services decided to design and build the proposed resource recovery facility in “The Bowl,” the 3.7 acre area adjacent to the farm. The program would cost about $5 million to build and could be built as early as August 2016.

Angell and Edberg previously applied for state-funded grants, but “fell into a catch” when they didn’t have enough financial and development planning. Now, Grounds Services has about 50 percent of the schematic design done so that they can be “shovel ready” when the time comes.

The facility would incorporate the composting and recycling of food scraps, post-consumer material and green waste that come from the dining halls and arboretum. Emissions are of particular concern for UCSC because the campus is committed to reducing its greenhouse emissions to its 1990 level by 2020.

“If the compost facility came together we wouldn’t have to truck the compost, we would reduce a lot of truck traffic,” Edberg said. “We also truck a lot of the green waste produced by the arboretum to the Santa Cruz facility, we could eliminate that.”

For Grounds Services, one of the biggest concerns is the staffing for the facility, Angell said. A full-time compost engineer would be necessary to tend to and mix the compost, but Grounds Services is going to try to be “efficient” with staffing.

“Dining is doing a very good job overall of composting, but one of the things that we have learned is that we need to compost paper towels,” Edberg said. “Commercial composters don’t like that stuff in their mix. If we want to compost those things we need to do that ourselves.”

For Grounds Services, there’s a sense of urgency to begin building the facility. The longer the project is put on hold, the more expensive it will be, Angell said. As the price of materials and cost of living go up and the economy continues to do well, it puts a strain on the finances of the project.

“We are trying to figure out if we are going to do a single building or piecemeal it as we get the funds,” Angell said. “If you piecemeal it, it ends up being more expensive over the long haul. If you [build] all at once you have to have all of the capital on demand, which is hard.”

Since UCSC isn’t able to fund a new resource recovery facility yet, Grounds Services is in the process of purchasing a Rotochopper MP2 grinder that can potentially process both post-consumer compostable forks and containers and food scraps.

“Operationally it is a critical link in our zero waste operations. Even if we don’t get a composter right now that would really help,” Angell said. “If we can use the grinder to preprocess the food waste and post-consumer waste together it would be really beneficial.”

To work around Marina’s annual limit on processed waste, UCSC needs a grinder that would cost about $375,000, and could potentially be available now because it doesn’t require the space that the facility needs.

“It also gives us the ability to keep materials on campus that we ship off campus,” said Edberg, senior superintendent of Grounds Services. “Greenwaste, [tree and brush] trimmings and all of those kinds of things could be just dumped into this grinder. The arboretum makes huge piles of
trimmings, it would be able to accommodate that.”

Until proper facilities are built and UCSC is able to accommodate the amount of waste produced by the campus, Edberg said that it’s up to the campus community to help keep the university as waste-free and sustainable as possible.

“An important message to get to the campus community is the source separation of all of these things is really important. That is a real key to making this all work,” Edberg said. “We have to educate people to be really conscientious about separating materials.”