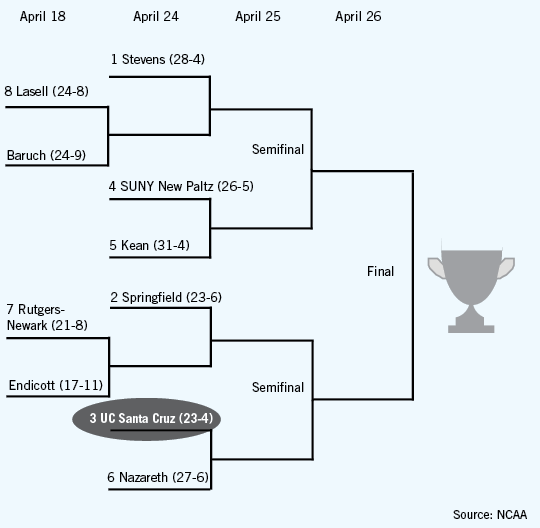 The men’s volleyball team earned its spot in the NCAA Tournament after finishing the season ranked No. 2 by the American Volleyball Coaches Association (AVCA) coaches and earning a Pool B berth among the independent teams.

The Slugs are the No. 3 ranked team in the NCAA bracket, which came as a shock to the team since it had been seated as the No. 2 seed by AVCA most of the season. UC Santa Cruz is the only team to beat the No. 1 ranked Stevens Institute of Technology.

The team will play on April 24 against No. 6 Nazareth College in the quarterfinals at the Canavan Arena in Hoboken, New Jersey. The Slugs have history with the Nazareth Golden Flyers, losing to them earlier this season but winning 3-1 in April.

The last time the Slugs went to the tournament was in 2013, when they played an undefeated Nazareth College and lost.

“Last time [in the NCAA playoffs] there was a lot of nervousness,” junior Jorge Reyes said. “We played on [Nazareth’s] home court with a big crowd, so it was a little stressful and we tried to treat it like another game. The emotion, and it being the NCAA Tournament and it being streamed nationally, gets to some people’s heads.”

The team had a winning season this year, ending with a record of 24-5 and a 23-4 Division III record.

“I want to go out and play, and when we leave, not have any regrets,” Reyes said. “I worked my butt off and so has my team this season, and I’m looking forward to what we can create from a whole year of sacrifices as a team. I’m excited to see how we react to the big show.”

Julie Roth, UCSC’s sports information director, is planning an on-campus screening of the game for students to cheer on the Slugs.