“We need our people here.” 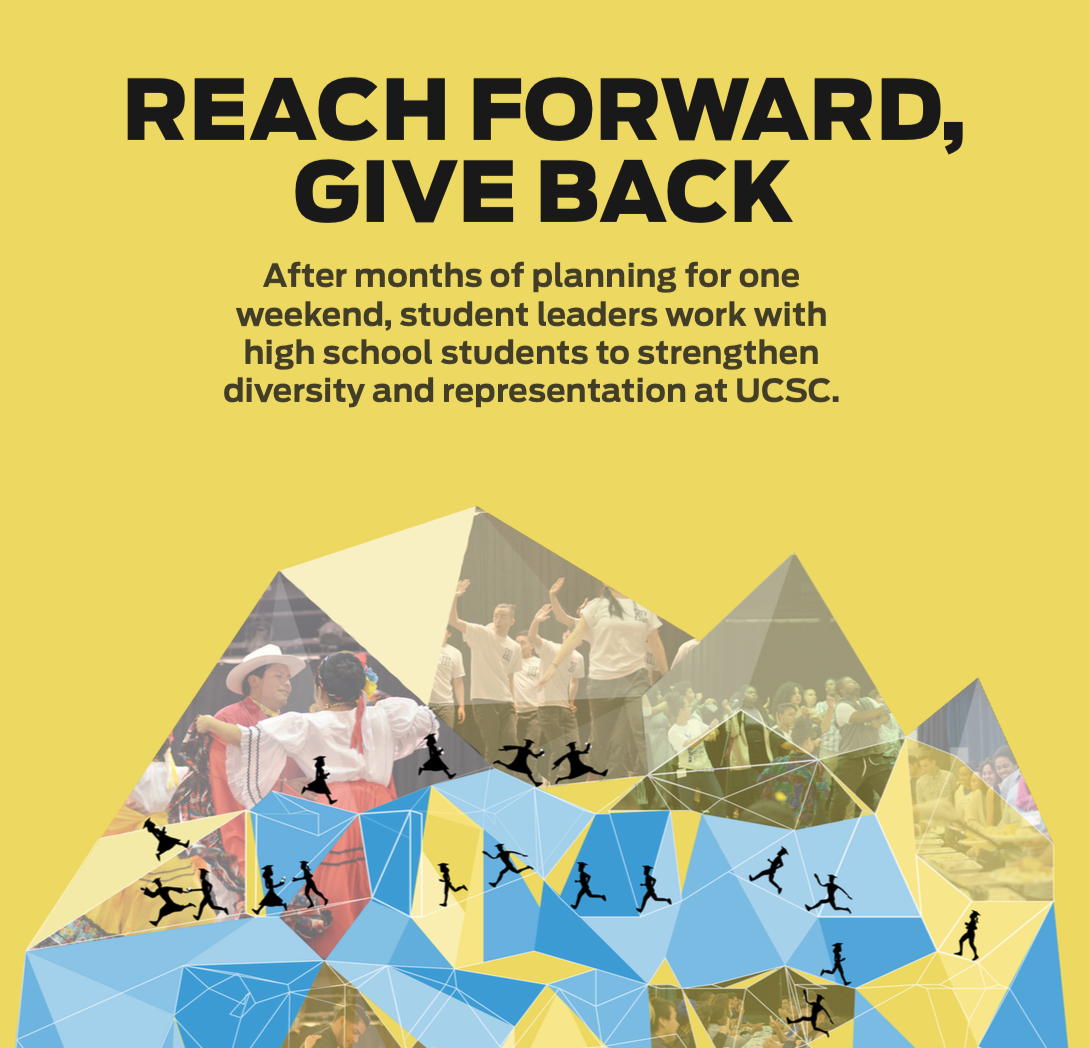 The prospective students participated in a weekend of workshops, discussions and community-building activities organized by interns, volunteers and three organizers per program. SIO offered students resources for their journey to higher education through mock lectures, lessons on financial aid and alumni speakers.

The number of students the SIO programs can bring to campus has decreased since 2012 — from 163 to 85 this year — but the program continues. e2 is aware of problems that have caused the decrease, including a lack of funding and organizers, a fluctuating number of applicants and a lack of space to house students.

Adlemy Garcia, the chair of e2, said this year’s students were housed at Oakes College and Colleges Nine and Ten. In past years, students have stayed at Cowell and Stevenson, but Garcia said the groups have faced several incidents during their overnight stay — including firecrackers and a 40-ounce bottle being thrown at some participants.

“For many years, our students have not felt welcome, so this year we decided we would not house any of our students [at Stevenson or Cowell] and this is the year that we didn’t have any of those issues,” Garcia said. “I don’t want to say it’s because of that, but it’s something we’ve taken note of.”

SIO is currently funded through e2 with the help of Measure 15, Community and Resource Empowerment (CARE) and a Memorandum of Understanding with Chancellor George Blumenthal. For every $1 that Measure 15 provides, the chancellor matches it with $1.25. Garcia said the programs benefit the university and the chancellor’s funding is important to the SIO programs, though the funding isn’t permanent.

“SIO yield students bring a different perspective — they’re bringing in their histories, who they are and the community that they represent and they truly are transforming our campus,” Garcia said. “They’re making our campus more conscious, critical and aware of different issues. It’s not a one-sided story, it’s a story that is complicated, complex and if we truly want to enhance our education, we need students like us here, we need our people here.”

Although Valerie Vance identifies as both Filipino and white, she didn’t get the chance to explore her Filipino heritage while growing up in Santa Monica. It wasn’t until she came to UC Santa Cruz for the Student-Initiated Outreach (SIO) program A Step Forward (ASF) that she was presented with the chance to understand herself more deeply.

“When I came here I gained a sense of the other half of my identity — my other chromosomes that I didn’t really know about,” said Vance, who now attends UCSC and is an ASF coordinator this year. “It was really great because I got to understand who I was while also making family and friends who are going to be there for me until the earth shatters.”

Through the help of the Filipino Students Association (FSA), ASF brings admitted students to UCSC to present a peer-to-peer presentation of the student experience. While forming connections and friends, students partake in workshops, tours and discussions to better understand higher education and the resources available to them at the university.

“SIO weekend motivates a lot of people especially those who are confused as to what they want to do after high school,” said ASF and FSA volunteer Nicole Hayes.

ASF familiarizes the students with the opportunities available to them on campus, and simultaneously assures them that they have a community to join if they choose to come to UCSC. Hayes said it’s important to establish a sense of family among each of ASF’s 25 prospective students.

“The transition from high school to college or even high school to whatever is happening after can be lonely and confusing,” Hayes said. “To have a sense of family that you already know and they already know you, it makes it less difficult when [ASF participants] come here because they are away from their friends and family back home but they come to a place where they’ve already found a community.”

Many of the students who first came to UCSC through the ASF program come back to ASF to become volunteers or coordinators. Francis Hilao, a former ASF participant, said he volunteered because he wanted to give back to his community.

“The reason we are doing these SIO programs is because there are underrepresented students here — especially DHE and ORALE and the Latino culture and African American culture and Filipino culture,” Hilao said. “It’s a great way to outreach for students and really teach them some things about our culture and encourage these students to take up higher education.”

ASF coordinator Vance said ASF is committed to improving each year and more specifically, she would like to improve the program’s relationship with administration. She said it’s important for administration to understand that student-initiated outreach, a process that celebrates peer-to-peer interaction, should be fostered all over the university.

“Students know students. Admin, they graduated between five and 50 years ago, they don’t know what it’s like to be a typical college student living in 2015 — tuition hikes, hate crimes on campus, climate change,” Vance said. “Everything is happening and they haven’t been a student in a while.”

Vance started with ASF and she finished with it, too. Three years after her arrival on campus, Vance welcomed a new generation of prospective students as she is set to graduate this year.

“For me, I want to give back to the community that brought me here,” Vance said. “I want people who were in my shoes to realize they have the potential to thrive at a university that wasn’t what they thought it would be. You can make a home here.” 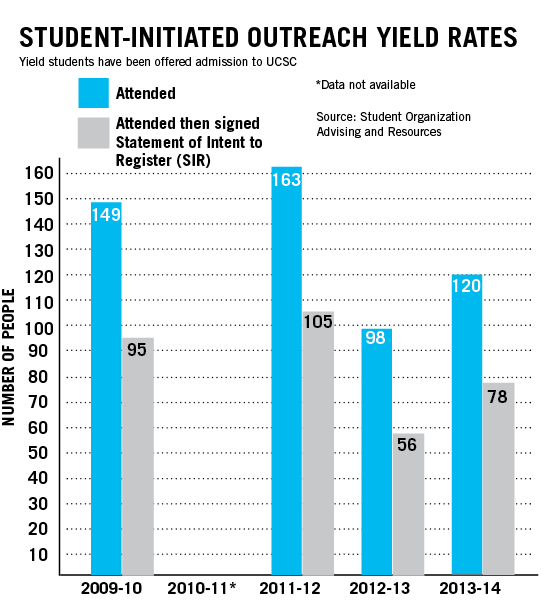 Oportunidades Rumbo A La Educación (ORALE), the outreach program serving the Latin@* community, accepted 32 prospective students from over 200 applications. Despite a smaller number of students than past years, the goal remained the same — show students they have a place in higher education.

“Our main goal is to have students get to know resources that are available for their success,” said Vicente Vega, one of the three ORALE coordinators.

As a part of the Student-Initiated Outreach (SIO) weekend, prospective students learned about life at UC Santa Cruz through workshops and programs organized by ORALE, the outreach sector of Movimiento Estudiantil Chican@ de Aztlán (MEChA).

Students attended workshops on topics including financial aid, time management and university navigation as a first-generation or undocumented student. Students also went to a mock lecture intended to introduce them to the structure of college courses.

“I would like them to know that they can do it, that higher education is obtainable for them no matter what background they come from,” said first-year MEChA volunteer Oscar Montiel. “Whether it’s this school or another, whatever they want to do, they should try to find a community.”

Throughout the weekend, ORALE aimed to form communities and encourage students to become active members of the university.

“ORALE [participants] see the campus give them reassurance that there is a community here that is welcoming and that is expecting them to be successful and that will help them in any way possible,” Montiel said.

Workshops on gender, sexuality and identity reinforced the sense of community that ORALE seeks to establish among incoming students.

Guillermo Carrillo, another ORALE coordinator, said some of the prospective students told him they related to the speakers and their backgrounds. He said he wanted students to “have conversations that they’re not usually having” on relevant issues like “gender, identity and success.”

While ORALE’s mission is to empower first-generation students to pursue higher education, the program has accepted fewer students each year. Last year ORALE hosted 45 students, but this year the program could only accept 35 students.

ORALE coordinator Susan Nieves said “our funding continues to be cut and our options are limited in terms of housing.”

Despite its limited budget, ORALE coordinators and volunteers are committed to creating a supportive community for prospective students. If the students decide to attend UCSC in the fall, Nieves assured them they would find a home.

“There is a community here for them and they do deserve to be here,” Nieves said. “Attaining higher education is really difficult as a person of color, but we want to make sure they know that they earned their spot here.”

* Latin@ and Chican@ is used to be inclusive of both males and females, as well as those who do not identify within the gender binary.

Tasked with introducing prospective students to the African and black community at UC Santa Cruz in the course of three days, Destination Higher Education (DHE) offered various workshops last Friday that focused on the black experience at UCSC and within a sociohistorical context.

Hosted by UCSC’s African/Black Student Alliance (A/BSA), the program aims to challenge the lack of diversity on campus through educating recently admitted students across California and cultivating a sense of unity among participants. African American students composed a mere 1.9 percent of the undergraduate population at UCSC in fall 2014.

Teju N. Adisa-Farrar was one of ten facilitators and volunteers for the program’s first workshop, which addressed about 35 participants. Many of the facilitators, including Adisa-Farrar, were former staff members of a nonprofit called Leadership Excellence and now lead workshops in colleges and organizations across the nation. Adisa-Farrar underscored the scarcity of spaces such as those created by DHE within the larger university.

“When you go to a college that’s predominantly white, it’s [rare] to walk into a room where everybody is black,” Adisa-Farrar said. “This is a unified space, this is a safe space, and you can all trust each other and remember each other’s faces.”

The workshop was dubbed “The Maafa Experience” — a Swahili word meaning “great tragedy” — and focused on the history of African Americans in the United States, from their origins in Africa to the slave trade to the current Black Lives Matter movement. After a PowerPoint presentation led by Saleem Shakir, an educator and founding member of Concerned Black Men of Oakland, students were separated into five groups, or “nations,” to undergo a simulation of the past.

The small conference room was converted into an African village as drum beats echoed from the speakers and the smoky aroma of incense filled the air. Participants were blindfolded and each group was led around the room by facilitators, chanting “I am because we are” and “Let the circle be unbroken.” This scene quickly dissipated as the simulation carried students through the Middle Passage, slave auctions and gang culture.

The exercise induced feelings of fear, isolation and loss of culture within the participants, some of whom were brought to tears by the end. However, many students expressed that they had gained a better understanding of their own history and personal identity as a result of the workshop.

“This experience raised my consciousness to another level, solidified why I’m definitely going to this college, and it helped me understand that I have to be a part of the solution,” one of the high school students said during the closing comments. “I have to be the person who’s going to say, ‘I’m a part of this system but I’m going to use this system to my advantage to help others understand what we just went through.’”