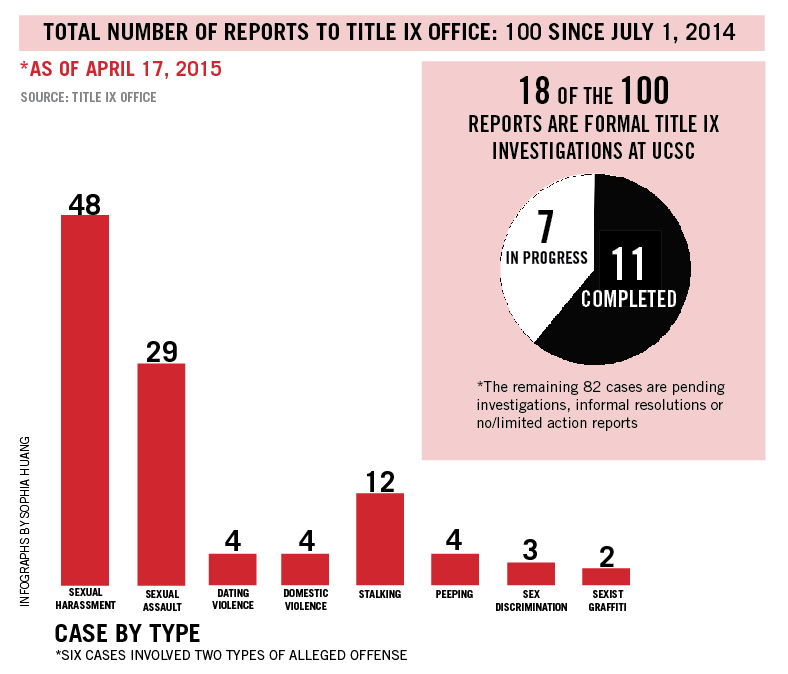 The Title IX office has received 100 reports since July 1 — 48 of which were sexual harassment and 29 were sexual assault.

In March, the U.S. Department of Education’s Office for Civil Rights (OCR) notified UC Santa Cruz that it would be under investigation for how it handles sexual violence and sexual harassment complaints.

The OCR is responsible for enforcing Title IX, a federal law that prohibits discrimination on the basis of sex in education programs or activities in schools that receive federal financial assistance.

There are 18 formal Title IX investigations at UCSC — 11 completed and seven in progress — as a part of the 112 sexual violence cases at 105 campuses that the OCR is investigating, which include UC Berkeley, UC Davis and UCLA.

“Any time you have pressure from an outside source to improve policy, it presents an opportunity for growth,” said fourth-year Amelie Meltzer, who is the sexual violence prevention coordinator at Student Health Outreach and Promotion (SHOP). “The fact that we’re one of so many schools facing this investigation speaks to the fact this is really a widespread problem.”

“The kinds of reports range from sexual assault and sexual harassment to peeping in bathrooms and anonymous sexist graffiti,” Tsugawa said. “That total number of reports does not include all the requests for consultations from faculty and staff on concerns and questions they have related to Title IX issues which do not constitute a report of sexual harassment or sexual violence.”

SHOP reports 54 individuals seeking help for sexual assault, domestic violence, sexual harassment or stalking from a confidential advocate for winter quarter — 48 identifying as a victim, and six identifying as a friend or significant other.

The increase in Title IX reports at UCSC “is an indication that victims/survivors are more willing to come forward and report incidents,” Tsugawa said. “Still, we know from research that in general, far too many incidents of sexual harassment and sexual violence go unreported for myriad reasons.”

The UC Policy on Sexual Harassment and Sexual Violence is also under systemwide review, “a process that was initiated through recommendations of the UC Task Force and in response to new federal and state requirements, all prior to receipt of the notice of the OCR review in mid-March,” Tsugawa said.

Whether or not the UCSC policy will be revised to ensure compliance with the UC policy is unclear.

“It’s too soon to know whether there will be any policies or procedures that can be improved,” said Scott Hernandez-Jason, UCSC’s news and media relations director. “However, we are ready to make changes if warranted.”

UCSC has already hired a new confidential victim advocate and will be hiring another within the next four months. Still, Tsugawa said the campus will inevitably struggle to keep up with the needs of all victims who come forward due to limited resources on campus, but the campus does try to address the needs of students, staff and faculty, though the campus at large may not see it.

Meltzer, the sexual violence prevention coordinator at SHOP, has worked at SHOP for the past four years and has seen the changes in how students respond to sexual violence on campus. She said the prevention programs on campus are strong and resources have improved, but there’s room for growth.

“We’re definitely experiencing a huge culture change, a huge awakening of people’s awareness around this issue and that’s really positive,” Meltzer said. “What the investigation proves is we have come far enough that someone knew their resources and rights and knew when they were being violated, but the fact that they felt that way means we still have room to grow.”