Fewer Californians, More Out of State and International Students Admitted to the UC

Delayed nearly three months due to uncertainty with state budget, the University of California (UC) admissions data was released on July 2, and showed disappointing results for Californians. The UC system is admitting fewer in-state residents compared to out of state and international students.

Undergraduate applications to the UC have reached a record high, according to the data released on Thursday, yet only about 60 percent of the 103,117 California applicants were accepted to at least one of the nine UC undergraduate campuses — a drop from 63 percent last fall. 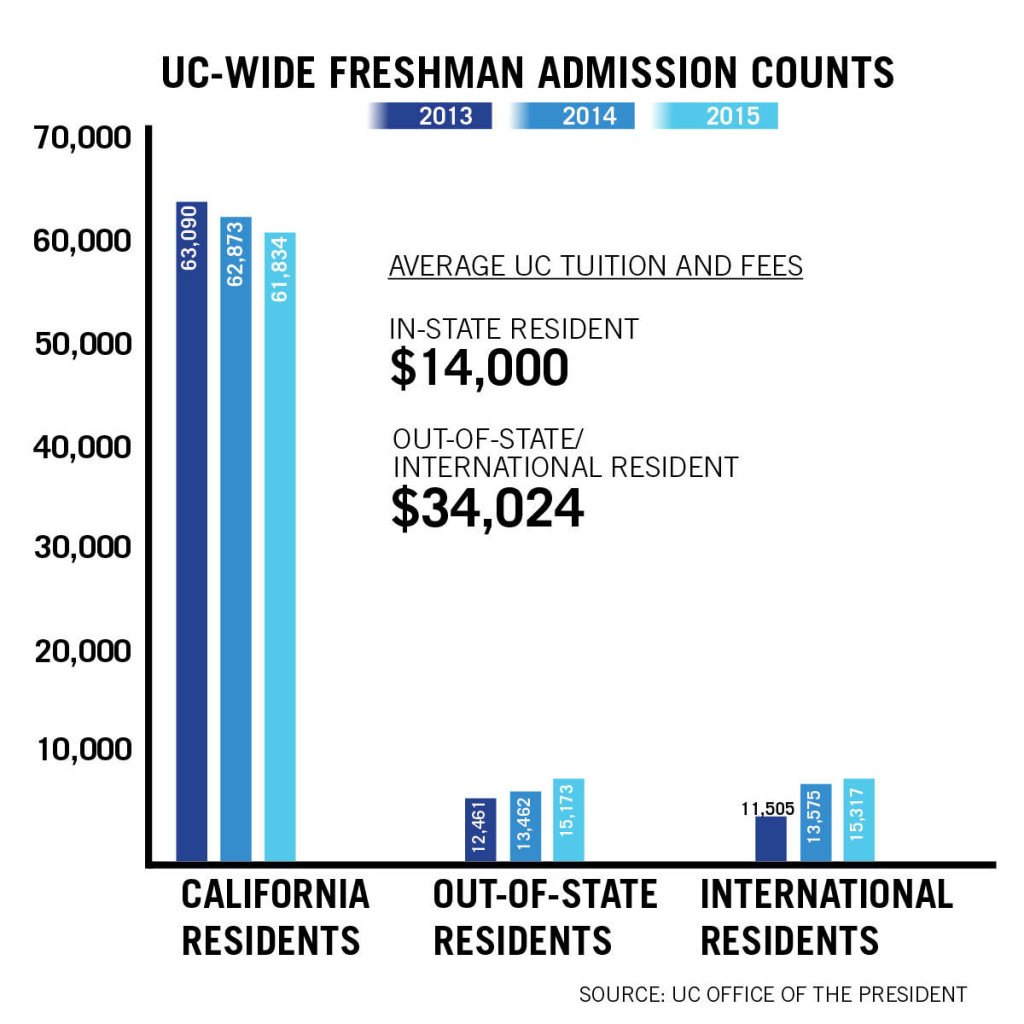 Of the near 3,500 first-year undergraduate students admitted to UCSC this fall, the ratio of California residents to out-of-state and international students reached an all-time low. In 2013, 94.1 percent of the admitted students were California in-state residents. In 2014 that number fell to 80 percent, and again dropped to 75.5 percent.

Stephen Handel, the UC associate vice president for undergraduate admissions, confirmed that the majority of international students are from China, Korea and India. He expects that the percentage of California freshmen will remain about the same as the past year, despite the fact that the 61,834 Californians accepted to UC were about 1,000 fewer than last year.

Of the admitted UC applicants, Chican@ and Latin@ students comprise 29.6 percent, an increase from 27.9 percent in 2013. However UCSC, which was recognized as a Hispanic Serving Institution-designate in 2014, admitted only 4,442 Chican@ and Latin@ students, the lowest number in three years. Likewise, the percentage of African American students has dwindled to 520 — or 3 percent — of admitted students, and the Asian American population at UCSC has elevated to 34.6 percent — 689 more acceptances than in 2013.

The UC Statement of Intent to Register data, which details who will attend a UC in the fall, is set to release in late October, Handel said. The UC admissions staff is expecting the “summer melt,” when anywhere from 1-3 percent of students declare that they’ll attend a UC, but don’t show come fall. Until then, there won’t be a “clear snapshot” of just how many students enroll.