On the same day that a New York panel approved a proposed $15 per hour minimum wage for fast-food chain employees and a day after Los Angeles county decided to increase minimum wage to the same number by 2020, UC President Janet Napolitano released the UC’s plan to boost minimum wage for UC employees to $15 by 2017.

The Fair Work/Fair Wage Plan will raise minimum wage for direct and contract workers in the UC to $13 per hour on Oct. 1, 2015, followed by one dollar increases for each of the subsequent two years. Current minimum wage in California is $9 per hour, which is set to increase to $10 on Jan. 1, 2016.

Though students who work on campus are considered UC employees, the plan doesn’t include employees working less than 20 hours per week, which is the limit for on-campus jobs.

The UC system is the third largest employer in the state, and this increase is expected to affect about 3,200 direct employees. The move is estimated to cost the UC about $14 million per year — funding that will come from parking fees, hospital revenues and bookstore sales, as opposed to state funding or tuition.

In alignment with recommendations from the President’s Task Force on Preventing and Responding to Sexual Violence and Sexual Assault, incoming students this fall will be required to complete a sexual violence and prevention training.

The additional new measure will increase support services to victims of sexual violence and sexual assault cases. By fall, there will be a respondent support coordinator at each campus to “help respondents understand their rights and the university’s investigation and student adjudication processes.”

Late last month the UC was sued by three current and former UC Berkeley students for improperly responding to their sexual assault complaints. They claim the university didn’t act quickly enough regarding their complaint, or sufficiently punish the students who were found responsible. They also cited the university’s failure to adequately educate students about sexual assault and abuse.

Last April, UCSC, along with UC Berkeley, UC Davis and UC Los Angeles, were notified by the Department of Education’s Office for Civil Rights that the campuses would be under review for their handling of sexual violence and sexual harassment complaints.

Since January the UC has been in the process of implementing the task force’s seven recommendations from 2014. 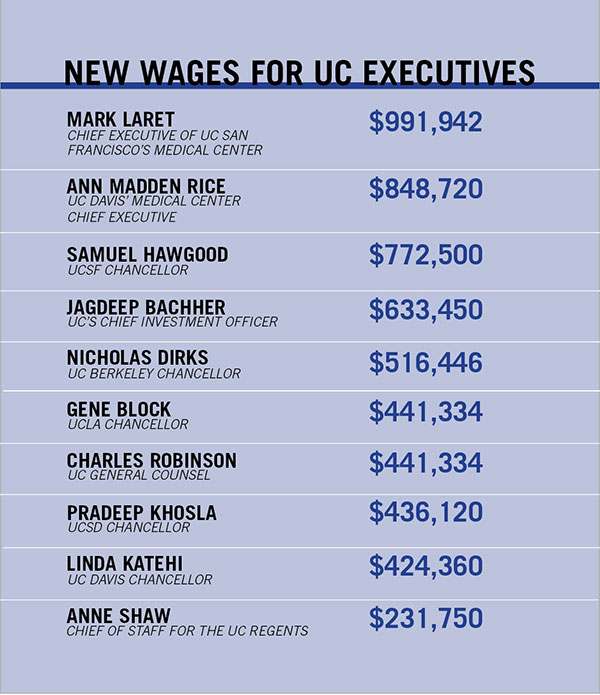 The pay raises will not be funded through state funds or tuition, but rather through revenue from medical centers and investments. The regents argue that UC administrator pay rates are often below those at competitive universities.

Kevin Sabo, the acting president of the UC Student Association, called the increases a “betrayal of families across California and a crisis of priorities that will affect much-needed funding for enrollment growth and deferred maintenance” in a press release.

Last September the three lowest-paid UC chancellors were given 20 percent salary raises, which included UCSC Chancellor George Blumenthal, whose pay increased from $319,300 to $383,160.

While the UC’s plan to implement a tiered pension system wasn’t on the regents’ agenda for this month, multiple public commenters took the opportunity to express their concern with the pending new system.

When Gov. Jerry Brown and Napolitano settled on a plan that would freeze undergraduate resident tuition for two more years, a change to a tiered pension system was also agreed upon, though details remain in negotiation. The changes, including a shift from guaranteed benefit to a 401(k)-like retirement plan, would be applied to new university and medical center employees hired after July 1, 2016.

When a nurse of 31 years at UCLA stood up to warn against destabilizing pension, her colleagues and allies stood up behind her, holding signs like “Nurses Put Patients First, UC Should Too” and “UC Needs to Respect, Recruit and Retain RNS.”

Esmael Ostadi, who has worked as a nurse at the UCSF Medical Center for 13 years, understood when his son, who also went to school to be a nurse, quit his UC nursing job.