In response to attacks on accessibility to higher education in the late 1960s, University of California students mobilized to form what eventually became known as the University of California Student Association (UCSA). UCSA is a student government organization that advocates for all 240,000 UC students. It has addressed issues of affordability and quality of the UC system, with campaign and lobbying efforts at UC, state and national levels.

At UC Santa Cruz, Measure 8 funds our student government, the Student Union Assembly (SUA). Measure 8 is a student fee, enacted in 1986 and increased in 1989 and 2003, which is now $7 per student per quarter. The fee generates over $300,000 annually, and requires UCSA membership, which costs each undergraduate student at UCSC $0.67 — about $32,000. This allows discounted prices on UCSA’s three main conventions — Student Lobby Conference, UC Student Congress and Student of Color Conference. 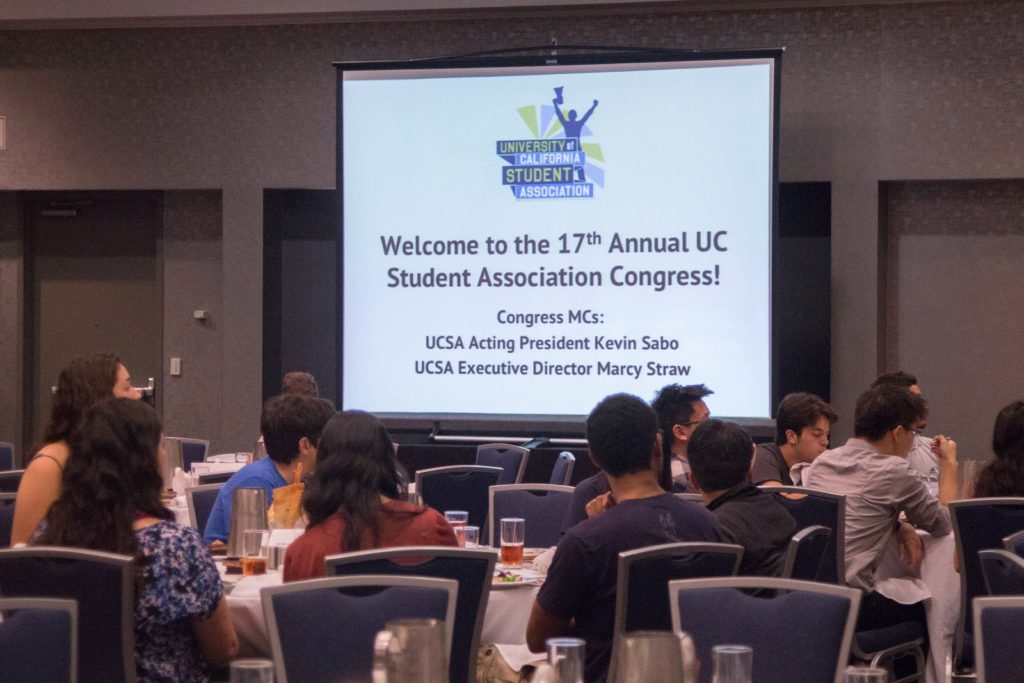 The 2015 UC Student Congress was held in Irvine during August 13-16. Students came from all over California to represent their respective campuses as delegates, receive leadership training, attend workshops and develop the 2015-2017 UCSA campaign. Of the three annual conferences hosted by UCSA, this one highlights activism and student issues. During last year’s UC Student Congress, the UConsent campaign was created, which aimed to improve services for sexual assault survivors through the implementation of consent and bystander intervention training, among other tactics. This year, the stage was set for another issue-based campaign to be born.

As an incoming freshman at UCSC, I apprehensively applied to the conference. I hoped it would be an opportunity to get involved and enact change, but I wasn’t sure if I had enough experience with student government or the UC system to have a successful time. However, it soon became apparent that this conference actively sought to include students’ voices in the contemporary discussions and actions most relevant to them. 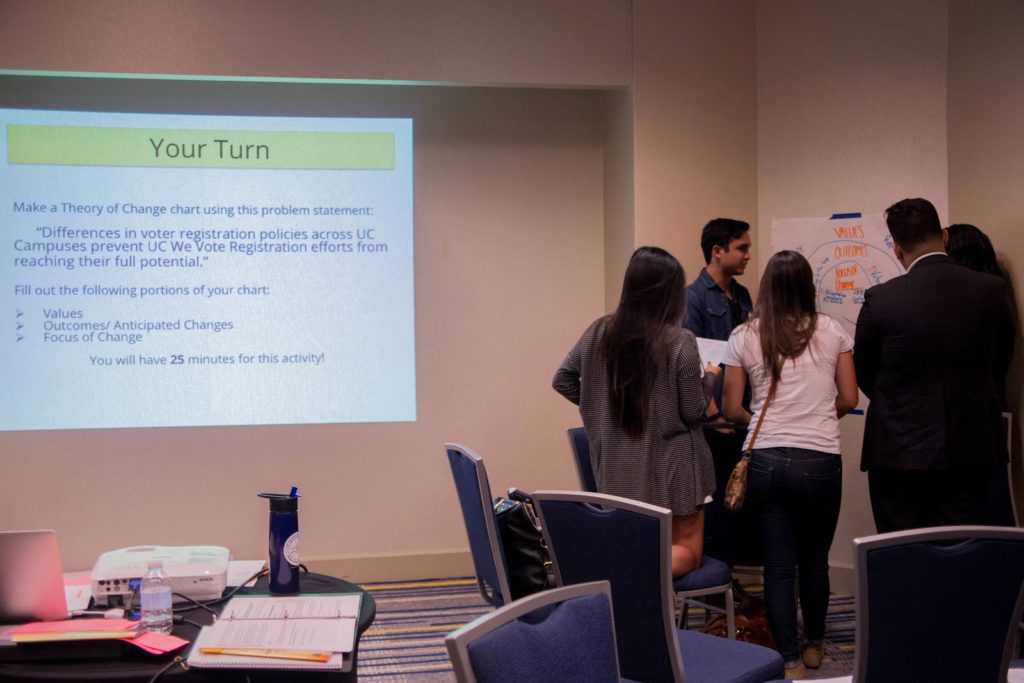 Student delegates were arranged into small groups of people from various campuses. We were trained to plan effective campaigns and learned how to realistically strategize, organize volunteers and hone our own abilities as activists.

Through workshop presentations, students were enlightened about their rights when encountering police, global warming solutions, unknown UC operations, the cannabis industry and increasing student representation on the UC Board of Regents. These presentations served to stoke flames of consideration of issues that could be addressed by UCSA’s 2015-2017 campaign. 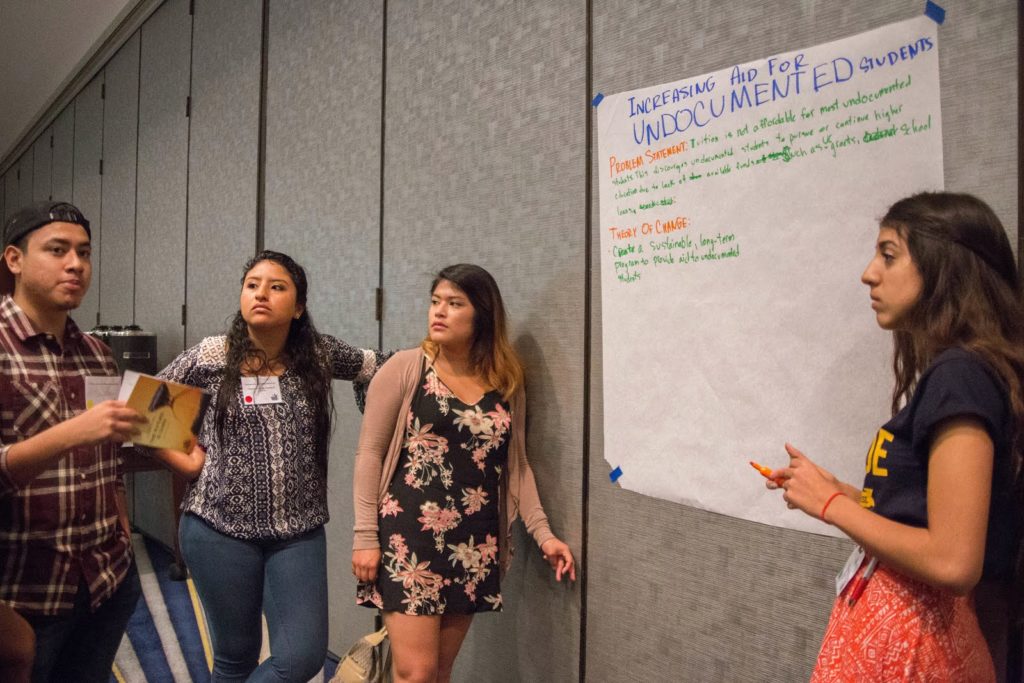 Students then participated in an “open space marketplace,” where they walked around and pitched campaign ideas to other delegates. Groups of interest around particular issues soon formed, with posters that detailed the strategic points of their proposed campaigns.

I talked to UCSC students about their thoughts on which campaigns they connected to, found viable and considered especially relevant to life back on our own campus. 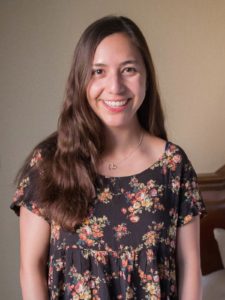 Speaking on Let’s Talk and Beyond Survival

“As college students, we’re under a lot of stress. We have jobs, classes, graduate school and time management to worry about. We often experience lack of sleep and anxiety… we need to destigmatize mental health resources, and make them more accessible. Yet, housing at Santa Cruz is a big problem too. Students are crammed, and what is available is notably expensive.” 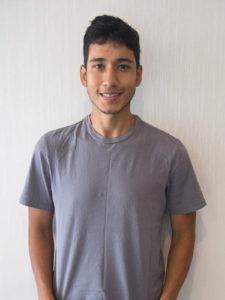 Speaking on Beyond Survival

“I’d like to see a personalized approach to housing and food insecurity with on the ground volunteering in food pantries, and spreading awareness of the campaign through word of mouth to roommates and friends.” 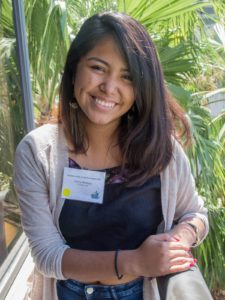 “As a hispanic woman, I want to see myself reflected in my counselors’ identities and experiences. I like that a goal of Let’s Talk is to ensure proper cultural sensitivity and diversity training, as well as hiring more minority staff. Students pay for proper care…and that’s what they should get.” 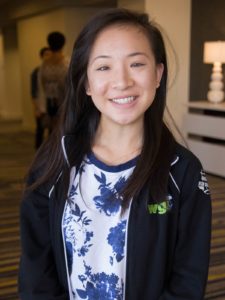 Speaking on Let’s Talk and Beyond Survival

“I like the purpose of Beyond Survival most, because increasing access to affordable housing and food would tend to the foundational needs of everyone. Let’s Talk is the most thought-out and researched campaign though… it’s the most achievable. When I come to Santa Cruz, I want to know that I’ll have good counselors.”

It quickly became apparent that Beyond Survival and Lets Talk were the most popular campaigns, although many students expressed frustration with having to pit issues against each other in order to choose one. The issue of mental health seemed to resonate deeply with the largest number of students. Mental health awareness has steadily increased in recent times, with efforts to end the stigma of mental illnesses at the forefront of the movement. In the case of students, many have faced deferral, lack of representation of their identities, high costs and physical inaccessibility to buildings while paying for health care on their campuses. 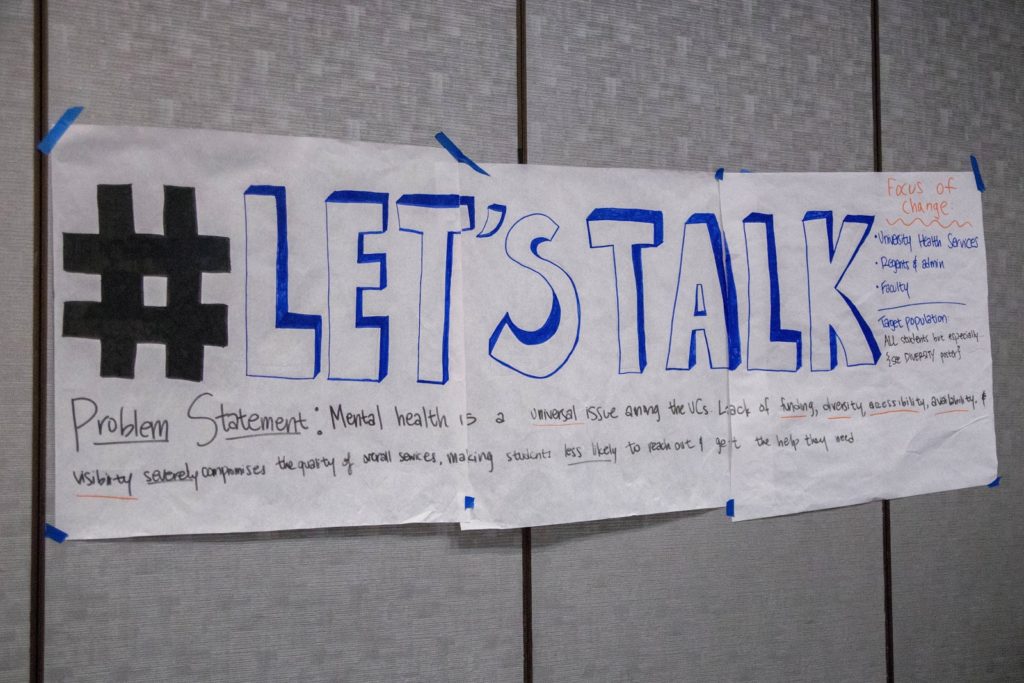 The last day of the conference culminated the inclusive, mobilizing and grassroots activities of the past few days. Delegations of each school voted among themselves to determine what vote they would cast in the selection of the new campaign. Although Beyond Survival came in second, Let’s Talk swept the UC Student Congress. Upon hearing the news, the students who helped develop Let’s Talk stood up together and cheered. UCSA will help refine and execute the goals of Let’s Talk on each UC campus starting this fall.

UCSC will also have the following students represented as UCSA’s officers this fall.