Mapping the Mystique: A History Course for Newcomers

In the mid-1950s, when members of the UC Board of Regents began scouting locations for a central coast campus, the city of Santa Cruz promptly placed a bid to host it. While considering the small beach town for selection, the regents also scouted more practical locations closer to neighboring San Jose, which had a population more than four times larger than Santa Cruz’s in 1950. However, as the regents drove over the Santa Cruz Mountains on a particularly hot summer day and felt the cool breeze blowing in from the panoramic Monterey Bay, they decided to accept the city’s bid and settle on a stretch of farmland owned by the family of 19th-century industrialist Henry Cowell.

Much like something you would find in a Thoreau book, UC Santa Cruz boasts some of the most placid and visually arresting environments you will find in the natural world. It is the only University of California campus incorporated (at least in part) into a forest, and what the campus lacks in UCLA or UC Berkeley’s metropolitan qualities, it makes up for in sheer scale. Since its founding 50 years ago, the university has become home to numerous iconic landmarks, both organic and manmade. In 2007, then-professor Jeff Arnett and students in his writing course penned “The Unnatural History of UC Santa Cruz.” In the crowdsourced guidebook, Arnett and his class lay out the origins (but not necessarily the precise locations) of these landmarks. Here are a fraction of them. 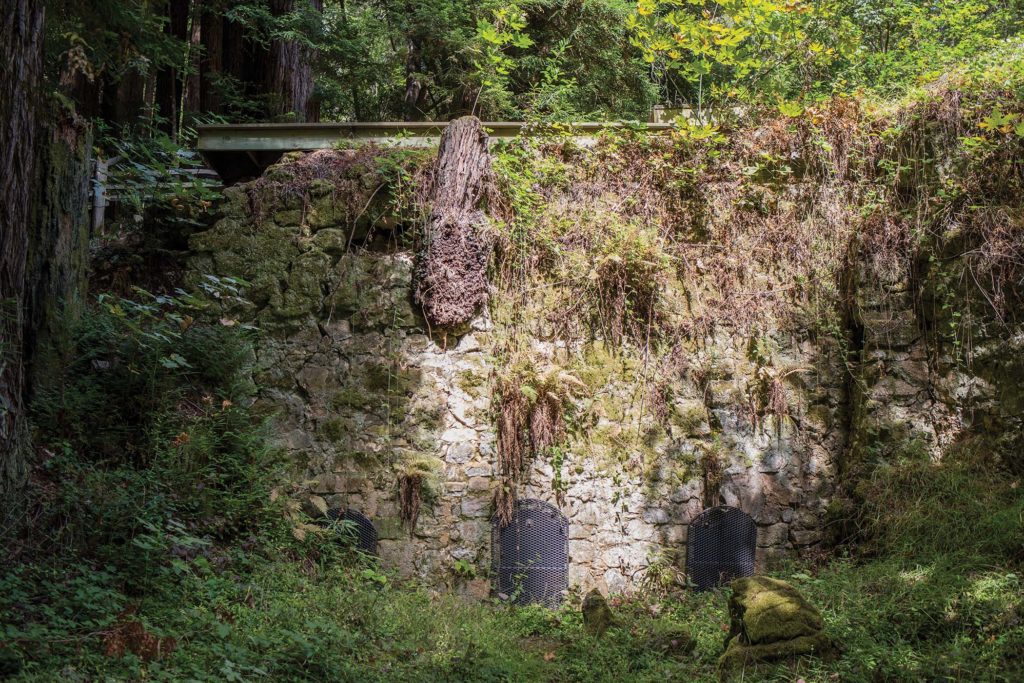 This land now part of UCSC was once a highly lucrative mining site. The first limekilns, constructed in 1852 near what is now the base of campus, were used to burn marble mined from Cowell’s quarries. Marble, when burned, produced lime, a substance necessary for the fabrication of mortar, plaster and cement. The lime produced in the kilns was used for constructing the Panama Canal and Grand Coulee Dam and for the reconstructing San Francisco after the 1906 earthquake. At the turn of the 20th century, the demand for lime and the resources needed for its production began dwindling, and eventually dried up altogether in 1946. Other limekilns can be found near the entrance to Pogonip, located on the east side of campus. 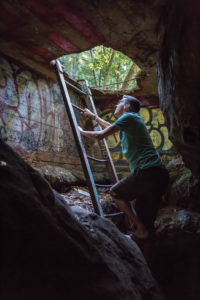 Behind Porter Meadow, visitors can find a heavily vandalized concrete enclosure and metal ladder leading into Empire Cave, better known to UCSC students as Porter Cave. The three-chamber cave was formed a million years ago when the water levels in Santa Cruz were much higher than they are now. During this period, carbon dioxide mixed with the water to form carbonic acid, which ate through the rock and created deep subterranean pockets, each chamber smaller and damper than the last. The cave is a popular locale for new students exploring campus in fall quarter. It’s accessible by a trail starting behind Porter B, which snakes around the Meadow and spills out at Empire Grade. If you’re planning a trip, make sure to bring a flashlight and a friend. 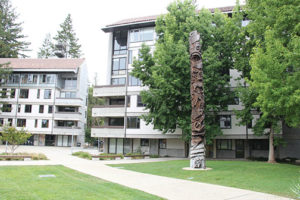 The totem pole standing considerably tall in the Porter Quad was built in 1984, when Professor Emeritus Doyle Foreman commissioned sculptor and international arts and crafts consultant Georganna Pearce Malloff to construct the totem pole. UCSC students completed a lion’s share of the carving, though sculptor Angelo Grova and UCSC music professor David Cope worked alongside them. The McCrary Family, owners of Big Creek Lumber, donated the wood for the project. The totem pole incorporates symbols of earth, air and water alongside typical Santa Cruz images such as a surfer riding a wave. 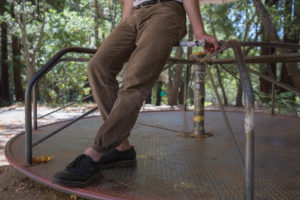 The metal centrifuge next to the Thimann Laboratories on Science Hill doesn’t look much like the playground attraction of our childhoods. It isn’t particularly decadent or colorful in its appearance and isn’t in close proximity to a good swing set or a circular slide. It is, however, just as satisfying to ride. In the late ‘60s and early ‘70s, before the merry-go-round’s construction, professors from the physics department would take its students to the funhouse at the Santa Cruz Beach Boardwalk during its off-hours to use its Spinner, a mechanized wooden turntable operated by a technician. The Spinner’s motor allowed it to spin gradually faster, which professors used to explain various motion equations such as the Coriolis effect.

As the department grew, it became less practical to use the Spinner, so the classes would visit the merry-go-round at San Lorenzo Park. This continued for some years, until the late professor Ron Ruby sponsored a project to build the merry-go-round that stands today. Though intended for academic purposes, it’s open for any and all visitors to hop on and take for a spin or two (or a thousand). 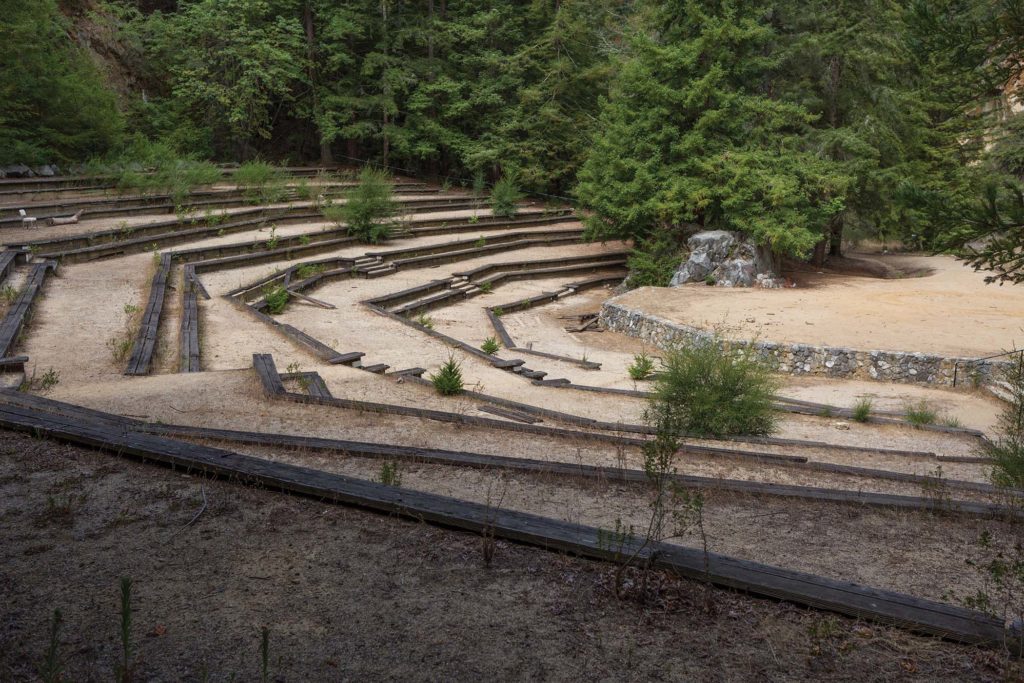 In 1967, only two years into UCSC’s debut, one of the former marble quarries was repurposed as an amphitheater used for graduation ceremonies, convocations, musical concerts and performances put on by the theater arts department. Notable speakers include former UCSC professor Angela Davis and philosopher Buckminster Fuller. The amphitheater  cost $82,000 to construct — more than $585,000 in 2015 dollars. It was closed down in 2006 due to its deteriorating state and has since fallen into a state of further disrepair. Many members of the campus community have lobbied to reconstruct it in a movement called “Bring Back the Quarry!” The budget forecast for the project is $18.1 million as of October 2014, and $6.38 million in student fee reserves has been allocated to it so far.

Students with a keen interest in campus history are encouraged to find the remains of the old Perrier Parcourse — a series of small workout stations installed by the Perrier Corporation. The first parcourses were built in and around Europe throughout the mid-1960s and arrived stateside in 1973. They peaked in popular­ity during the late 1970s to mid-1980s, with nearly “4,500 courses built globally,” according to Arnett’s book. UCSC’s parcourse arrived in June 1980 and was paid for by UCSC’s Office of Physical Education, Recreation and Sports (OPERS), the community, the Alumni Association and Per­rier. Dr. Wayne B. Brumbach — the then-director of OPERS — catalyzed the parcourse’s construction.

Arnett, a student at the time, later echoed the dismay some students felt about administration allowing the Perrier Corporation to advertise on campus using the parcourse’s instructional signs. This came to a boiling point two months later, when students opposed to the blatant advertisement vandalized the signs at all 18 of the stations. Though they were later replaced, the signs were vandalized many more times and Perrier eventually abandoned the campaign. Despite this, the stations scattered around campus still stand — next to the pools in OPERS, outside the Kresge K Building, in Porter Meadow, and hidden in the forest behind Upper Campus. Keep your eyes peeled, and if you do find a station, don’t be afraid to put it to use. That’s what they’re there for! 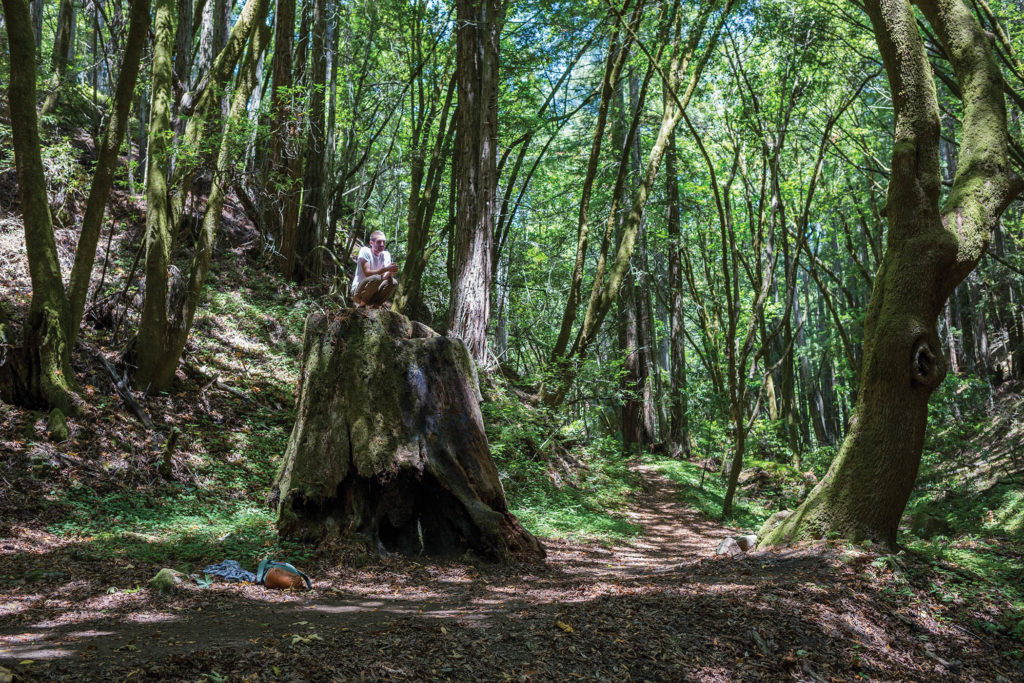 Across Empire Grade and down a marginally safe trail is a giant redwood stump you can’t miss. Though very little is known about the site located in the ravine below Empire Grade, it is speculated that the redwood, which students have referred to as “Stump King,” was one of the many trees sacrificed at the height of lime production in the mid-1800s. The stump itself stands about 10 feet tall and about 4 feet in diameter and is a must-see for hikers and explorers. 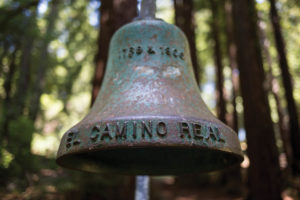 Nestled between Hahn Student Services and Quarry Plaza, this bell is one of 555 in California that trace the centuries-old El Camino Real, or “The King’s Highway.” The road, which spanned 600 miles from San Diego to Sonoma, dates back to the time of the Revolutionary War, when a group of Spaniards and Mexicans established missions along the California coast. The road connected the 21 mis­sions built between 1769 and 1833, as well as three pueblos and four presidios. The first series of bells tracing out El Camino Real were erected between 1906 and 1914, and 425 in all were installed along the trail. The original 425 eventually deteriorated due to the elements and were restored in 1960 by Justin Kramer, the principal landscape archi­tect of Caltrans and John Kolstad, the president of the Cali­fornia Bell Company.