Fighting for the Future

Santa Cruz, California is by no means a city on the average NBA fan’s radar. But yesterday, over 100 NBA figures — including scouts, general managers and future stars — united in this Bay Area city for the first day of arguably the NBA Development League’s most important five-day stretch of the season.

“It’s a great thing, it means the environment of the showcase last year had some success that would like to carry over to 2016,” said Pat Sund, the Santa Cruz Warrior’s associate general manager. “It was great for the city.”

The NBA D-League is the NBA’s official minor league which prepares players, coaches, officials, trainers and front office staff for the NBA. With the addition of the Raptors 905 this year, the D-League currently has 19 teams singly affiliated with one NBA team.

The 12th annual NBA D-League Showcase, which features 19 games over the five days, will give its 200 plus athletes the chance to showcase their talents with executives from every corner of the league. While this is a crucial time for the athletes, the Santa Cruz Warriors coaching staff continues to maintain practice preparation and execution, particularly throughout the week when the 19 teams share gym hours.

“We only have an hour so we have to be efficient, but in terms of the way we prepare for our opponents is always the same,” said Casey Hill, the Santa Cruz Warriors head coach. “We just adjust to the logistics of the showcase and make sure that our guys are as prepared as they possibly can be. Obviously from [the players’] standpoint this is a great opportunity for them to show what they can do, and it’s an added bonus and an added pressure to play well and play the right way.”

More than 45 NBA D-League players have earned Gatorade Call-Ups during or in the days immediately following the last 11 NBA D-League Showcases, according to an NBA D-League official release. Needless to say, the showcase can provide significant opportunity at the next level.

“We know a lot of NBA personnel will be in attendance, and it’s a chance to impress as many people as possible in one setting,” said Earl Clark, forward for the Bakersfield Jam. “My teammates and I are looking forward to competing and hopefully we leave Santa Cruz with two wins.”

Clark and the rest of the Jam, who were the 2015 Showcase Cup champions, will take the court against the Maine Red Claws in day two of showcase action. 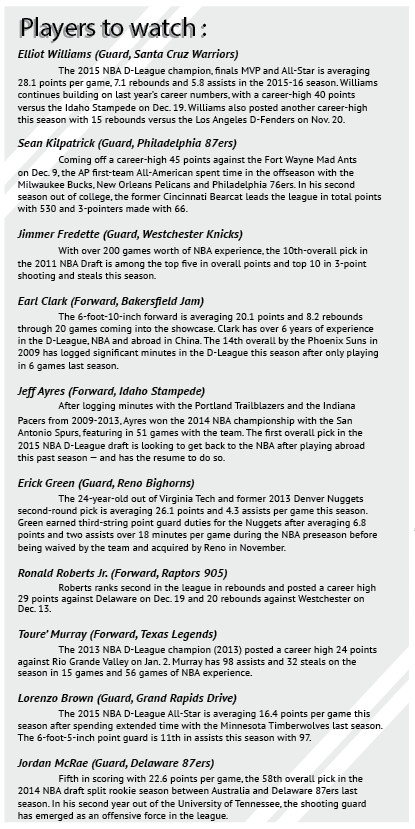 The first day of action featured matchups between the Canton Charge and Idaho Stampede at 10 a.m and continues with games between the Westchester Knicks and Texas Legends, Delaware 87ers against the Oklahoma City Blue, and the Iowa Energy taking on the Austin Spurs.

All but one of the matchups at the showcase are between teams in opposite conferences, the showcase being their only scheduled matchup of the season. This gives scouts the chance to see how their players can match up against the rest of the league.

“It’s an incredibly challenging thing to make the NBA, there are just not that many spots,” said Jimmy Paulis, director of player personnel for the Houston Rockets. “It’s the elite of the elite. At this level, the guys who dominate in the D-League are not going to be that in the NBA. They are going to have to be the guys who do the little things, the dirty work.”

A 2016 NBA D-League Showcase champion will be awarded based on a team’s overall win-loss record at the showcase. In the event of a tie, which is likely given that each team only plays two contests, the advanced basketball statistic Net Rating (calculated by subtracting Defensive Rating from Offensive Rating) will be used as a tiebreaker. Last year, the showcase tested an eight-team, single-elimination tournament that featured a championship game on the final day. But ultimately, the showcase is for the players to earn an NBA contract.

“We are getting our ducks lined up in a row, and we look forward to have a new team out there Friday and Saturday,” Pat Sund said. “And we’re excited about going up against the Iowa Energy and the Sioux Falls Skyforce. It’s nice to go up against the opponents in the opposite conference to see where everyone is at this point of the season.”