The City of Santa Cruz ended 2015 with its lowest water consumption levels in 50 years. Much of the cutback was due to severe water restrictions and penalties imposed by the city, but also in large part to the efforts of the city’s biggest water client — UC Santa Cruz. How can a campus, in the midst of a four-year drought and having more than doubled in enrollment size over a 30-year period, continue to use water sustainably?

“It’s going to be a challenge,” said UCSC energy manager Patrick Testoni, who oversees water usage on campus, “but we’ve got a plan.”

California entered the most severe drought in the state’s history in 2014. In an effort to conserve water, Santa Cruz imposed some of the strictest water restrictions in North America, ultimately aiming at a system-wide reduction of 20 percent for 2015 — a target the city comfortably achieved. Santa Cruz’s plan, which included free water-saving devices and educational classes for residents, garnered national attention.

Around 35 percent of UCSC’s water usage comes from student housing, according to the Water Working Group (WWG), an on-campus organization seeking to minimize potable water use at UCSC. 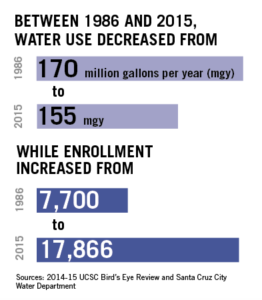 “We’ve got legal reasons [to be sustainable], but we’ve also got obligations to educate and house our students,” Erickson said.

These particular legal reasons could prove costly as UCSC, according to Testoni, has an “agreement with the city that as we grow, we don’t consume more water or we pay a lot more.”

If UCSC exceeds its 206 million gallons per year (mgy) threshold, it would need to pay $8,880 for every additional 85,000 gallons it uses per year, said Toby Goddard, administrative services manager at the Santa Cruz City Water Department (SCCWD), in an email.

Despite this potentially severe financial penalty, Testoni is confident that UCSC will stay well within its quota of water use. “Our goal is to not increase our water usage, and we have a history of not doing that,” Testoni said.

UCSC used 155 mgy in 2015 — 51 mgy under the threshold, according to the SCCWD. This figure, however, is projected to rise to 196 mgy by 2020, according to a forecast made by the city’s Water Supply Advisory Committee last year.

“UCSC really is a standout when it comes to conserving water,” said Eileen Cross, communication manager for the Santa Cruz City Water Department.

“That’s a message we’d like the community to understand more broadly,” Cross continued and was eager to clarify the misconception that UCSC uses a large proportion of Santa Cruz’s water supply. “People blame UCSC for being a big water consumer, when in reality they’re doing a great job.”

This misconception is reflected in the figures, with UCSC only accounting for around 7 percent of Santa Cruz’s total water in 2015.

“The big picture,” Toby Goddard said in an email, “is that between 1986 and 2013, enrollment has more than doubled, but overall water use on campus recently has been nearly the same as it was in the mid-1980s.”

One of the reasons for such sustainable campus water use is UCSC’s student-led approach. Started in response to the 2008-09 drought, the Water and Action Drought Response Team is a student-led group that audited water use on every building in campus, helping to find campus’ biggest wasters.

Lindsay Edelman, a former member of this team and a UCSC alumna, now works for the Santa Cruz City Water Department as a water conservation representative.

“It’s really been a collaborative approach to cutting back usage at UCSC,” Edelman said. “What’s making it so successful is getting the involvement from different departments and different heads of buildings, as well as students.”