Will the Next Student Regent Come From UCSC? 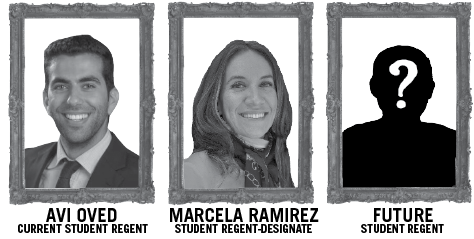 Since mid-January, the University of California’s student regent and his successor have toured UC Santa Cruz and the other campuses to help recruit the next student regent. The position was created in 1975, but no UCSC student has been a student regent. During the previous five rounds, only an average of 44 students across the UC applied each year.

The UC student regent, currently Avi Oved from UC Los Angeles, sits on the 26-member board of regents for a year and helps develop and vote on policy surrounding budgets and programs. The next selected student will become the UC student regent-designate and work with the current designate Marcela Ramirez for a year before earning a vote. Ramirez joins the UC Board of Regents as a voting member on July 1.

“The student regency can be the most transformative experience of your life,” Ramirez said. “I don’t expect to come out the same. I’m still learning, I’m learning a lot. It’s high speed, it’s really fast paced — it’s a lot of involvement.”

According to the UCSC Dean of Student’s office, 46 UC students, including seven from UCSC, applied  for the student regency last academic year. Two UCSC students were among the 10 semifinalists last cycle. This year, students have until Feb. 28 to apply.

In the previous five years, an average of six UCSC students have applied. Information on the current cycle’s applicants becomes available after the Feb. 28 deadline, said assistant Dean of Students Lucy Rojas in an email.

“I definitely encourage students to apply,” said Katiuska Vargas, a third-year UCSC legal studies student who was interviewed for the position last year. “Even though it’s a difficult process, it is totally worth it in the end. It’s really rewarding because you’re going to be making a difference in your community and also impacting the lives of thousands of students with the decisions you’re making.”

Working as the UC student regent-designate takes anywhere from 10 to 40 hours a week, Marcela Ramirez said. Whoever gets the job isn’t paid, but is reimbursed for travel expenses and receives two years of free tuition during their time as regent-designate and regent.

“There have been more challenges on how to maintain the pace of my academic progress at the same time as doing this,” said Ramirez, who’s also a higher education Ph.D. candidate at UC Riverside. “I end up writing in airports and writing in planes.”

Applicants should prepare for a gauntlet of three interviews. The first is with the UC Council of Student Union Presidents who select 10 semifinalists to go onto a second round of interviews with UC Student Association (UCSA) representatives. Eventually, three students are presented to a subcommittee of the UC Board of Regents who give the final say on who’s selected.

“I think [the UC regents] are looking for somebody who can build the bridge between the students and the Board of Regents,” Ramirez said. “Somebody who can increase communication and build a relationship via a channel of communication that’s an avenue for getting the message out on both sides, while raising student issues and also helping students understand the board is not evil.”

Ramirez said the future UC student regent should be prepared to advocate for student issues, as they will likely be working on problems surrounding food security, housing and campus climate toward underrepresented students across the UC system.

Katiuska Vargas applied last year to become the UC student regent to bring her experience as a student who is undocumented and has a learning disability. Vargas was chosen by the UC Council of Student Union Presidents as one of the final 10 students considered for the job and went on to the second interview with the University of California Student Association (UCSA) Executive Board. She said the second interview was the most grueling.

“It was a really hard interview,” Vargas said, “but the process was really rewarding. It was an experience that gave me the tools I needed to succeed in other leadership ambitions that I encountered in the future.”

UCSC’s Student Union Assembly’s Vice President of External Affairs and UCSA Board Chair Guillermo Rogel was on the UCSA committee that interviewed Vargas, and will interview candidates again this year. Each interview with a candidate averages around 45 minutes, Rogel said.

“We’re looking for someone who really has an experience in either community organizing or some kind of educational policy,” Rogel said. “A mix of both is really great and a passion to be a student advocate at the Board of Regents. There has to be some demonstration that you can balance the life of the regent and the student advocate. In the end, you are representing students.”

Vargas said she would’ve applied even if she had known she wouldn’t become the UC student regent, and she encourages UCSC students to do the same.

“You’re never going to be ready for anything in life,” Vargas said. “You just got to take the opportunity and make 100 percent out of it. If you don’t get selected, that doesn’t mean anything — that just means you’re going to have a greater opportunity waiting for you later on.”