Twenty students with posters and a list of demands disrupted Executive Vice Chancellor Alison Galloway’s informal office hours at the Global Village Cafe (GVC) this afternoon. The protesters demanded support for sexual assault survivors and a reform of campus policy relating to the subject.

The rally was organized by the Coalition for Survivors’ Rights, an unofficial organization across the UC system dedicated to providing a space for survivors of sexual violence, harassment and assault. Though they originally planned to march to Chancellor George Blumenthal’s office, the group changed its plan last minute to directly address Galloway. 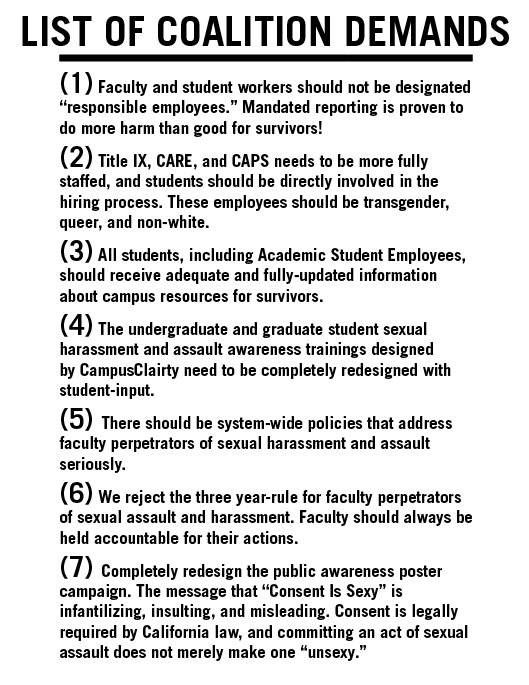 “We are going to confront [Galloway] with the horrible job the university has done at all levels,” said Amanda Reyes, a Ph.D. student and organizer of the rally, to the students outside the library. “This is complete and utter bullshit, and this needs to change.”

The coalition organized in response to the implementation of the UC Office of the President’s sexual harassment and assault policy. Put into place in January, the policy mandates having educational awareness campaigns about sexual consent on UC campuses as part of the “yes means yes” law and requires campus training sessions on sexual conduct.

Currently, one in four college women report surviving rape or attempted rape at some point in their lifetime, making the topic of sexual consent a national one. Multiple student organizers of the protest said that while these campus policies are positive initiatives and responses to a broader conversation, the execution of the policy is problematic and triggering. UC Santa Cruz’s campaign used the slogan “Consent is Sexy,” which garnered mixed response from students.

“The issue with [the ‘Consent is Sexy’ campaign], is rape is not just lack of consent,” said Hannie Jordan, a coalition member. “Saying that not raping someone is important because it makes you sexy is creating a whole other issue.”

The protest also took place in the wake of an ongoing investigation led by the U.S. Department of Education’s Office for Civil Rights for the university’s handling of complaints of sexual harassment and violence.

“[UCSC is] trying to put bandaids on an open gash, and it’s not working,” Reyes said. “The people who are really suffering are survivors and people who might become survivors.”

The protesters entered GVC while chanting, “Survivors need support and justice, mandated reporting just won’t cut it.” They were pushed back by a student, who wished to remain anonymous, but screamed at the group: “This is the worst time, the worst place, this is a fucking library!” Other students in the cafe were interested and engaged in the message presented by the coalition, including Jackson Vanover.

“I just feel awkward about the tension of the guy who started yelling back at the protesters,” Vanover said. “That made it uncomfortable, but I support the community.”

Galloway led the group outside to prevent interruptions. But Reyes, with shaking hands and a powerful voice, stipulated the doors stay open so students could hear their demands of justice for sexual assault survivors.

She presented Galloway and the studying students with the coalition’s list of seven demands — including reforming the controversial “Consent is Sexy” campaign, making system-wide changes to the sexual harassment and assault awareness trainings and eliminating mandated reporting.

“Can I confirm they have been received?” Reyes concluded by asking Galloway through a megaphone.

“Yes they have,” responded Galloway, who promised to take the list of demands to Chancellor Blumenthal. She agreed to meet in a forum with students to provide feedback on sexual harassment policies and practices.

“It was successful in that I was personally connected with people who I hadn’t with before,” Hannie Jordan said afterward. “[Galloway’s] response was to smirk at most of things that we said to her and only say ‘yes’ or ‘I’ll try.’”