The first night Alana and her housemates spent in their house, they were greeted by an overflowing toilet. Because of inconsistent plumbing, the house’s walls would drip with toilet water from time to time.

“It flooded so bad, everything got wet and never really dried,” said the UC Santa Cruz student, whose name was changed. The constant moisture in the house caused mold that lined the corners of the bathroom and the gap between the wall and the porcelain tub.

One day when Alana went to check the mail, she found a puddle of raw sewage on the side of her house.

“I told my housemate to flush the upstairs toilet, and as soon as they did, we saw [sewage] come straight out the side of our house,” she said. “There was toilet paper and everything in the yard.”

Alana’s situation sounds extreme, but it’s not hard to come by. As UCSC enrollment increases and off-campus housing developments remain limited, student tenants are forced to settle for burdensome prices and inadequate conditions.

Full-time college students often work part-time jobs while their instructors demand 30-45 hours of schoolwork, leaving little time to negotiate for fair housing conditions with landlords. According to a 2015 report by the National Low Income Housing Coalition (NLIHC), someone working for $9 an hour would have to work 111 hours per week to afford a one-bedroom apartment in Santa Cruz. With all of this to consider, students shouldn’t have to worry about having a decent place to live.

The State of Student Housing

Santa Cruz County is ranked as the fifth-most expensive metro area in the U.S. to live in, according to the NLIHC. To afford a two-bedroom unit without spending more than 30 percent of income on housing, a Santa Cruz tenant would need to make $33.77 an hour. The average hourly wage in the Santa Cruz-Watsonville area is $23.75, according to a 2014 report by the Bureau of Labor Statistics, making the NLIHC’s estimate a nearly nonexistent wage for students and low-income families.

It’s common for a student to live in a garage, living room or office for $500 a month, or pay $300 a month to sleep on someone’s couch.

Alana now pays $780 for a single room in the same four-bedroom house, where the sewage problems persist. After discussing the house’s problems, Alana negotiated with her landlord for a lower rental price and more repairs. The landlord lowered the rent from $5,700 to about $4,700, and for the past six months, repairmen and contractors were in and out of the house, making small fixes to lighting and temporary improvements to plumbing.

Alana said the repairs increased the quality of the house, but nothing was permanently fixed. The upstairs toilet still overflows sporadically, sometimes seeping into the bedrooms through the walls. 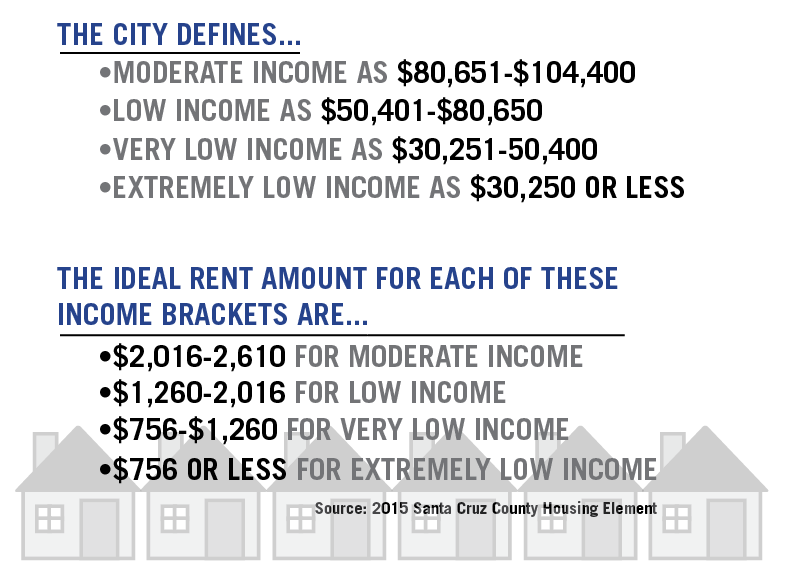 It’s not always a landlord’s intention to take advantage of tenants or cut corners with repairs. There are homeowners who understand the difficulties of paying for rent in one of the most expensive regions in the country and who want to provide suitable housing for tenants.

Deborah, a landlord and longtime resident of Santa Cruz who asked to be identified only by her first name, said she and her husband have never had any trouble renting to students.

“You can’t discriminate [against students],” Deborah said, “and we don’t. There’s no reason to.”

Deborah also thinks rental prices offered to students should be much lower.

“I have never jacked the price of the house up to market level,” she said. “[Prices] are already a nightmare.” She currently rents out her three-bedroom property for $2,900, when the market value is at least $3,250, she said.

Regardless of a landlord’s intent, Alana said it’s important for tenants to know what their rights are. Before she and her housemates confronted their landlord about their dissatisfaction with the house, they sought out legal advice from the California Rural Legal Assistance (CRLA) office. The CRLA provides free legal advice for low-income tenants, which many students qualify for.

Educating tenants on their rights is one of the reasons why Daniel Rudin co-founded the community group, Santa Cruz Tenant Organizing Committee (SCTOC).

The group informs tenants of their rights, some of which include protection against retaliatory eviction, the right to withhold rent under appropriate circumstances and limits on the amount of the security deposit the landlord can require, according to the California Department of Consumer Affairs.

Rudin filmed four documentaries about housing in the Philippines, Mexico, the Pacific Northwest and Chicago. Of all the different housing markets he’s studied, Rudin said Santa Cruz’s combination of overcrowding, the significant leverage landlords have over young tenants and the rising inflow of residents make the city unlike anything he has seen before.

“It’s verging on slum conditions,” Rudin said. “Even though on the outside Santa Cruz has been able to preserve this beautiful looking town, on the inside, it’s not that comfortable for people who can’t afford it.”

When someone making $70,000 a year can only afford renting a two-bedroom home, maintaining the “original Surf City’s” free-spirited personality is compromised.

Supply and demand can help to make sense of how these rental costs got so high. There are a large pool of renters, said former Santa Cruz mayor Mike Rotkin, namely UCSC students and commuters employed in Silicon Valley. This large demand, combined with a small supply of available housing units and an even smaller supply of affordable housing units, result in a very competitive market.

Although UCSC houses about 50 percent of its students on campus — the highest percentage of all the UCs — there are still about 8,640 students competing with people commuting to the Silicon Valley and other Santa Cruz tenants for affordable housing.

Sixty-one percent of those surveyed said they worked in a technical position, with 38 percent of those interviewed identifying as software engineers. The influx of Santa Cruz residents with above-moderate incomes are pushing those with lower incomes out of the housing market, creating a need for more affordable housing.

“Costs are obviously way too high,” said Carol Berg, who oversees the city’s affordable housing program. “It’s safe to say that we probably will never be able to build out of our housing problem because there’s such high demand that no matter how many units we build, there will always be more demand.”

In 2007, the city passed Measure O, which requires residential developers to provide affordable housing units to people in moderate, low or very low incomes. As of January 2016 there were 13 Measure O units available for rent, with the lowest rent being $923 for a single bed — meaning in January, there were no available Measure O housing units intended for people with extremely low incomes.

The county has a state-required document called the 2014-2023 Housing Element that must be updated every eight years to show an adequate number of sites are available to accommodate housing development for all income levels. It projects 1,466 new housing units to be built by 2023, of which only 505 are for low, very low and extremely low income.

But these units will only be built if funding is available, which Berg says is very limited since 2011 when state redevelopment agencies faced fiscal cuts.

“Although we have done a lot better than some communities about building affordable housing, it’s pathetic compared to demand,” said former Santa Cruz mayor Rotkin.

The city’s housing developments may satisfy demand for a while, but they won’t be a long-term cure. UCSC’s Long Range Development Plan plans to accomodate a total of 19,500 students by 2020, which SCTOC co-founder Daniel Rudin said will undoubtedly lead to further overcrowding in the city.

The tech industry doesn’t seem to be slowing down anytime soon, and unless UCSC lowers its acceptance rate and the city addresses the influx of residents, the demand for housing will only grow. If there isn’t more affordable housing built, low-income residents will be pushed out of the housing market completely.

Trying to Repair the Damage

In this competitive housing market, McKay said, “it can be difficult for people to feel they can exercise their rights.”

The purpose of McKay’s upcoming research project No Place Like Home is to document the causes of housing insecurity among low-income tenants in Santa Cruz. He is offering a class this quarter to have students participate in the research process.

“Our goal is to start the conversation,” he said, “not end it.” McKay’s goals are similar to Rudin’s for the SCTOC. Rudin aims for tenants to build “collective power,” and he recently held a workshop to help others learn how to advocate against landlords providing unfair living conditions.

“We’re trying to develop those relationships between the [students] and the folks in town because we’re all negatively affected by this housing market,” Rudin said.

Former mayor Rotkin tried to pass rent control in the city in 1978, 1979 and 1982. Despite endorsement by many UCSC students, his efforts were shot down all three times and in increasing amounts — by 74 votes the first time, 900 votes the second time and 3,000 votes the third.

Tired of the faulty plumbing and substandard conditions, Alana and her housemates tried to find another house to rent. Unsuccessful in their search, they will remain in the house until their lease ends this summer.

Though the housemates were faced with few options, along with all of the responsibilities of being full-time students, it didn’t stop them from seeking legal assistance.

“As a tenant you have rights,” Alana said. “We’re not as powerless as you may think.”