By Georgia Johnson and Wendy Renteria

The UC regents met March 23 and 24 to discuss and vote on an amended Statement of Principles Against Intolerance Report and President Janet Napolitano’s new retirement plan. Just outside the UCSF Conference room, the UC Afrikan Black Coalition protested the UC’s $425 million investment in Wells Fargo, which owns 1.5 million shares in private prisons. Protesters broke into chants of “black lives matter.” During the public forum, representatives from the coalition condemned the university’s investments and presented a petition with 8,000 signatures in support of prison divestment.

Inside, the regents also addressed mental health services on campuses, coinciding with this year’s poor systemwide results from a UC Student Association survey on mental health facilities. In addition to the UC’s plan to hire 85 additional clinicians in hopes to reduce wait times and increase outreach for the 2018-19 school year, there will also be increased funding for mental health services by $18 million, totaling $58 million systemwide. Regents also continued on to approve building plans at UC San Francisco and San Diego.

To reduce the UC’s $7.8 billion pension plan deficit, the regents approved Napolitano’s two-part staff and faculty retirement plan. The UC task force recommended the proposal to Napolitano at the January regents meeting. She announced it in a letter two weeks before this past meeting.

“Our people [faculty and staff] are what make UC great,” Napolitano said in the letter. “Maintaining excellence on such a massive scale is no small task. And it does not come cheaply.”

During the regents meeting, Napolitano explained that the program “will result in significant savings for the university.” She was optimistic that “those savings are estimated at $99 million per year, on average, over the next 15 years.” 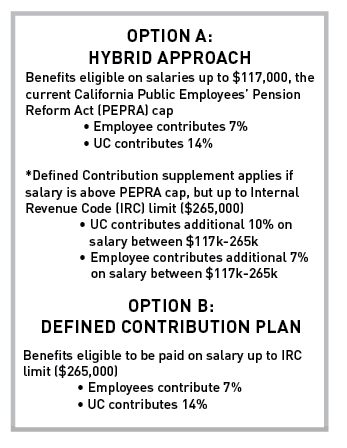 Over 15 years, the expected savings from the retirement program could amount to nearly $1.5 billion, a fraction of the university’s current debt estimated at $16 billion.

This new program will only affect retirement options for university employees hired on or after July 1, 2016. Current employees are automatically enrolled in one of the four different plans under the UC Retirement System (UCRS) based on their eligibility. New employees will now have two options for their retirement plans.

The first plan is intended, and better suited, for long-term or higher paid faculty and staff, while the second option is attractive for new employees who don’t plan to have a long-term career with the university or employees with lower incomes.

There are concerns, however, that the first plan will create a major discrepancy between staff and faculty, while the second plan could negatively affect employee recruitment and retention.

Todd Stenhouse, a spokesperson for the American Federation of State, County and Municipal Employees (AFSCME) 3299, the UC’s largest employee union which represents more than 22,000 employees, described the program as “detrimental” and “absolutely unnecessary.”

Stenhouse explained that because the first option is more attractive to higher paid employees, more money will be allocated for it from the UC contribution, which will leave less money available for those who select the second option.

“The plan essentially incentivizes high-paid employees to take higher benefits offered by the defined contribution plan, which means you have less money going back to the people on the defined benefit plan who are specifically low wage workers,” Stenhouse said.

Regent Monica Lozano said that the reasoning for the two options was to create “retirement options that are financially prudent, oriented towards the long-term sustainability of the university and allow us to effectively recruit the very best faculty and staff.”

She explained that the UC plans to use savings from the retirement plan to pay back the pension debt with which the university has continually struggled. “We can redirect the majority of those savings toward further paying down our unfunded liability which we know puts tremendous burden on the long-term financial health of this institution.”

But Stenhouse said these claims “were not substantiated in the proposal discussion.” He added that the plan could disproportionately affect women and people of color because lower ranking positions at the UC tend to be more commonly represented by those groups. In 2014, UC career staff — which, among many fields, includes food, health and student services — consisted of 65 percent women and 53.3 percent people of color.

“[The program] creates two tiers of employees and treats staff as second class,” Stenhouse said. “Starving pension plans in the long term puts the risk on the backs of workers.”

Contrasting the major savings expectations that the regents have for the program, AFSCME 3299 expects the retirement options to affect the services university students and patients receive because of the potential changes in long-term faculty and staff recruitment and retention.

“Workers want what’s best and what’s best is having respected, top-quality staff and faculty,” Stenhouse said. “This proposal moves us in the opposite direction.”

The regents unanimously approved an amended Statement of Principles Against Intolerance to condemn anti-Semitism, affirming that anti-Semitism has no place on the nine campuses. The amended report focuses predominantly on anti-Semitism and rejects equating anti-Semitism with anti-Zionism.

The decision was made in wake of UC-wide tensions of anti-Semitism, and the regents’ ongoing conversation about how to define anti-Semitism has provoked divisions between students and faculty with varying beliefs regarding the Israeli-Palestinian conflict.

The proposed “Principles Against Intolerance” report was prepared by an eight-person group including regents, faculty, administrators and students after the regents announced intent to adopt the California State Department definition of anti-Semitism and were met with backlash.

The report states that “opposition to Zionism often is expressed in ways that are not simply statements of disagreement over politics and policy but also assertions of prejudice and intolerance toward Jewish people and culture. Anti-Semitism, anti-Semitic forms of anti-Zionism and other forms of discrimination have no place at the UC.”

But the statement also asserts that first amendment principles must be preeminent in responses to acts of bias — including threats, assaults, harassment and vandalism, thus reflecting the regents ongoing struggle to balance the protection of free speech while combating intolerance.

Free-speech advocates said the state definition would have illegally restricted the right to criticize Israel and its actions. If the regents approved that version, they would have become the first governing board of any U.S. university system to condemn the rejection of Zionism.

UCLA graduate student Omar Zahzah told regents that after creation of Israel in 1948, his relatives were forced from their homes and that the original statement was an attempt to silence the voices of those advocating for Palestinian rights.

“Is there no place for us?” he asked the regents. “Are our stories and our struggles … simply meant to be built over, forgotten?”

General Counsel member Charles Robinson told the regents the statement is lawful and does not prohibit free speech.

“[The statement does not] impose a ban on any speech or behavior, but rather call on administrators to contest and challenge intolerant or discriminatory conduct and speech, in effect confronting and challenging intolerant speech with more speech,” Robinson said.