By the Numbers: The Cost of Being an Out-of-State Student

The state audit of the UC’s enrollment practices revealed nothing surprising — the UC prioritizes admitting nonresident students, who are sometimes less qualified than in-state students, to increase revenue. The UC system charges out-of-state and international students a $24,708 supplemental tuition fee. Last year, the UC collected $728 million of these supplemental fees to offset dwindling state funds and increasing costs. But how does the UC’s nonresident fee compare to the same out-of-state fees at public institutions across the nation?

City on a Hill Press looked at resident versus nonresident tuition and mandatory fees at 50 public higher education institutions to see where the UC ranks, finding that the UC’s nonresident supplemental tuition fee is the fifth highest in the country — public universities in Michigan, Virginia, North Carolina and Texas round out the top-five most expensive universities for out-of-state students. At the bottom of the list is the University of Alabama, where nonresident students pay just $7,890 more than Alabama residents per year. That’s a $21,730 difference compared to the school with the highest charges for nonresident students — University of Michigan, Ann Arbor. This graphic maps out enrollment details at the five most expensive U.S. public schools for out-of-state students, along with nationwide nonresident prices. 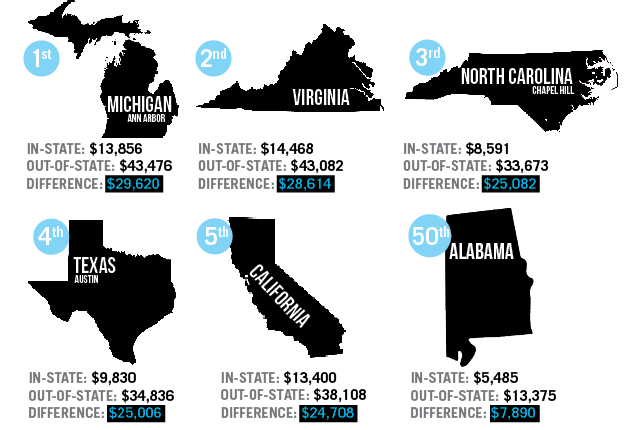