Last year at UC Santa Cruz, 18.6 percent of admitted students accepted their offer to attend the university — 57 of who selected UCSC after an experience more engaging than a university tour. In the spring, those students attended Engaging Education’s (e2) Student-Initiated Outreach (SIO) weekend — a three-day, two-night trip to campus, organized by current UCSC students. e2’s yield programs, which bring admitted high school seniors to UCSC for a weekend, aim to increase campus diversity and accessibility to higher education. 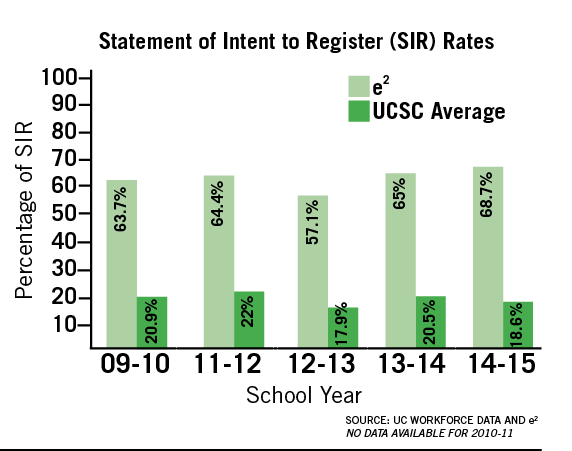 “SIO programs give students an opportunity to connect with a community before they even get to UCSC,” said SIO class facilitator Saoimanu Sope. “These programs provide a space for students to get out of their everyday schooling experience and immerse themselves in a world where they can develop and attain their own agency as students.”

The programs are coordinated by small groups of students, many of whom were brought up through e2 SIO programs as high school seniors. Sope facilitated a winter class through e2 with all current SIO coordinators to address college access, college barriers, campus climate, California’s education funding and leadership development geared toward communities of color.

“As a graduating senior, I wanted to spend my last year giving back to those who would be in positions to support our communities of color, and the SIO class facilitator position allows me to do just that,” Sope said. “It also allows me to help further the transition process of what it takes, feels, looks like to be an SIO coordinator for both current and future coordinators.”

SIO trips are the result of months of planning and dedication by current students to show prospective students who are underrepresented at UCSC and in higher education that they will have a support system on this campus if they choose to attend. e2 is also a retention center, which focuses on ensuring the success and graduation of under resourced and underrepresented UCSC students.

Measure 15 and a Memorandum of Understanding with Chancellor George Blumenthal, which matches every $1 from the student fee with $1.25 of university funds, help fund e2’s annual programming. SIO weekend includes workshops, tours, networking opportunities and bonding events to encourage seniors to transition into higher education.

Darrick Smith, UCSC alumnus and current assistant professor of educational leadership at the University of San Francisco, kicked off the weekend with a keynote on Thursday night alongside two other alumni. He was one of 50 black undergraduate men when he started as a UCSC student, and he spoke about the power of collectivity and community.

“It’s really important for students to know that they’re not alone because there is a community out there that can love and support you,” Smith said in his speech. “No matter who you are — gender, identity, sexuality — there’s always that type of support.”

“The success we’re trying to have within the institution has to be tied to a larger, more expansive notion of collective success in the world,” Smith said.

“I came with this loneliness, and I didn’t know we could talk about these things,” she said. “I brought rage to this place as soon as I knew I was allowed to feel it.”

She shared her compelling experience as an A Step Forward (ASF) participant in 2000, when Stevenson residents threw 40-ounce beer bottles at her and other students visiting UCSC. Jequinto continues to give back to the UCSC community, returning to campus to host introspective self-care workshops that focus on communication and conflict de-escalation. She uses the skills she learned as a student organizer to strengthen the power of students of color at UCSC.

“It’s a recurring theme that happens in our community that we don’t really get to talk about,” said ASF co-coordinator Kimberly Balmorez. Balmorez said often issues like mental health or personal struggles could be swept under the rug, and she wants to encourage visiting students to feel comfortable expressing their silences and connecting in the community.

In addition to discussing shared histories and common struggles, participants were also connected with Pacific Islander culture through music, dance and poetry, including performances by Haluan, People of the Island Polynesian Dance Troupe and Pagkakaisa Dance Troupe.

“Learning about the Filipinx* culture that’s alive here is really refreshing. I came from a primarily white community, so I don’t have that much Filipinx culture in my life,” said Nathan Calapine, a high school senior from Agoura Hills, California. “But just knowing that there are people here that are welcoming to you and that there is a group of people for you here is just reassuring.”

“This is a really vital moment in people’s lives, transitioning into college and figuring out who you are,” Balmorez said. “A lot of the participants are wanting to learn more about their family’s history and wanting to do more to help themselves and their communities.”

All of SIO’s programs stressed the importance of creating communities and forming alliances among students of color. ASF urged its participants to continue these conversations and form communities regardless of where they choose to attend university.

“Whether it’s here or anywhere else, I know the importance of getting a higher education and what I can do with it now,” Calapine said. “College itself is more than just that. It’s also a place to discover yourself more.”

*Filipinx is used to be inclusive of men, women and people who do not identify within the gender binary.

“ORALE’s theme is ‘somos lo que somos por lo que hemos sobrevivido,’ which means ‘we are who we are because of what we have overcome or have survived,’” said Jonathan Morales, a co-coordinator for ORALE.

While MEChA is a predominantly Chicanx organization, ORALE includes all Latin American and Latinx identifying students to ensure the panethnic community incorporates everyone.

ORALE’s mission to empower first-generation and underrepresented students to pursue higher education by providing workshops and networking opportunities is a key element in enhancing the Latinx and Chicanx educational experience at UCSC.

In 2012, UCSC earned Hispanic-Serving Institution (HSI) status, meaning the undergraduate enrollment of Latinx and Chicanx students surpassed 25 percent of the total population. UCSC is one of 100 California universities with the accreditation, which allows for the application of Department of Education Title V grants. In 2015 the campus received two such grants totaling $3.6 million.

Latinxs and Chicanxs are still underrepresented in higher education. According to a 2013 Pew Research survey, only about 15 percent of Latinx ages 25 to 29, have a bachelor’s degree or higher. However, the same survey also found the number of Latinx students enrolling in higher education is encouraging — the number of students age 18 to 24 enrolled in a two- or four-year colleges has more than tripled since 1993.

“These participants have faced struggles and even though they aren’t all the same, they’re struggles nonetheless,” Morales said. “Whether they’re individual or collective, you’ve overcome them to get to where you are, and that’s something beautiful.”

ORALE hosted a collection of activities and workshops for the Latinx students, including a Social Justice Tour and a poetry night. There was also a workshop focused on identity, gender and sexuality to reinforce a sense of community and inclusion.

“Coming here being a Latinx person as well, I didn’t know how to morph those two as well because I always felt that there was this binary, and I was either just a Latinx person and there wasn’t any visibility about a Chicanx person in my younger years,” said Kat Chavez, MEChA member and workshop presenter. “I didn’t know about critical people from the trans-movement, from the queer movement and I thought it was really important.”

Creating a safe space for identity expression was an important element of the workshop and the weekend.

“It’s really important for students to know that they’re not alone,” Chavez said. “Because there is a community out there that can love and support you no matter who you are.”

*Latinx and Chicanx are used to be inclusive of men, women and people who do not identify within the gender binary.

Many of the 29 students who came to Destination Higher Education (DHE) were unsure of what to expect at UCSC. On paper, the weekend consisted of speeches, workshops and activities, yet the overall impact on students was much greater than the sum of its parts.

“Right from the jump, I knew that this was going to be a very influential weekend, and now I’m ready to send in my letter of intent,” said Nyereath Nhial, a participant from Mount Miguel High School in San Diego. “That’s how powerful it was. I’m ready to come here and be a banana slug.”

Given that UCSC’s black student population is less than 2 percent, DHE is an important platform to bring and retain Afrikan/black students on campus. Despite their efforts to increase numbers, it’s an issue still at the forefront of many students’ minds.

“I wasn’t really thinking of UCSC. I hadn’t heard that much about it,” Nhial said. “I was really nervous going from my high school, which is really diverse and has every type of minority, to think of coming to a predominantly white institution. I was scared I would feel like an outcast.”

DHE volunteers and other students in the black community shared Nhial’s fears. Over the weekend, participants were encouraged to confront and try to change their underrepresentation. Last year’s DHE coordinator and current Afrikan/Black Student Alliance co-chair Keiera Bradley said, “We have to start being the change that we want to see.”

“If you see that this school doesn’t have a lot of black people, then you should add to that demographic, you should come up with an intensive purpose to change something about [it],” Bradley said, who also attended DHE as a high school senior. “We shouldn’t let numbers discourage us, and we should invade these spaces and make them ours as much as they are anybody else’s.”

DHE is an essential program to increase black representation on campus. In 2014-15 the number of black students accepted and committing to UCSC fell. Last year black students made up about 3 percent of the total admitted students .

“It’s important that we have communities where we can vent, and who share similar experiences and who relate to those experiences — being able to feel comfortable and feeling like you are not constantly being judged or constantly being looked at as somebody who is incapable of being here,” said Asante Nkosi, a DHE co-ordinator who participated in the program. “The community is important because it gives you a sense of belonging.”

Leisette Rodriguez, a union organizer for teachers in Los Angeles and UCSC alumna, spoke at the welcome event and said SIO weekend gives young students of color the space to see undergraduates of color reflect on who they are in relation to their culture and higher education.

“They come from the same neighborhoods, possibly the same experiences, but they are also able to relate to the fact that they’re going be coming into a university that is overpopulated with the majority,” Rodriguez said.