Selling you the Science of Street Rap

In between spitting grit and rawness about the harsh realities of drugs, death and a hard life, humility poured through the mic as Freddie Gibbs performed to about 150 lucky, loyal — and mostly male — fans. The intimate show transpired at The Atrium on April 6 as part of his tour promoting his latest album, “Shadow of a Doubt,” released last November.

“You follow drugs/You get drug addicts and the drug dealers/But you start to follow the money and you don’t know where the fuck it’s gonna take you,” Gibbs rapped in his last verse of “Fuckin’ up the Count,” one of the more popular songs on the album. His demeanor was collected but sharp, and he stood shirtless as sweat dripped down his face.

Though Gibbs isn’t interested in glamorizing drug use, he acknowledges it’s a reality for some, which is reflected in his music. And for many young adults in both privileged and under-resourced neighborhoods, Gibbs is revered.

Giovanni Walker, a fourth-year UC Santa Cruz film and digital media student from Los Angeles, who produces, performs and writes hip-hop music, has looked up to Gibbs since 2011 when Gibbs emerged with his second mixtape “Cold Day in Hell.”

“He is not the most politically correct,” Walker said. “Yet his ability to use hip-hop culture immediately spoke to me and inspired me to self educate and further decontextualize myself from current systematic situations.”

Gibbs, also known as Freddie Kane and Freddie Corleone, responded with a high level of certainty when asked why he thinks youth connect with this message of drug crime.

“I don’t want kids selling dope. I don’t advocate that for them,” Gibbs said. “[This narrative] is part of the American dream. America loves bad guys.”

As chants to “Fuck the Police” served as a transition between songs, the rapper from Gary, Indiana transcended regions, surfing through the sounds of the east coast to the west coast with ease. The crowd followed along, singing furiously to the rapper as if they were singing their own anthems.

On stage, Gibbs embodies the modern American gangster, a persona drawn from namesake Tommy Gibbs, a character from the Blaxploitation film “Black Caesar.” Popularized in the 1970s, the Blaxploitation genre features an all-black cast geared toward a black audience, though many have discussed the stereotypical portrayal of black communities in the films. In “Black Caesar,” Gibbs’ character is both a powerful criminal and a fearless underdog, a mentality the rapper showcases in his work.

Opener Chaz French juxtaposed his own struggle with Gibb’s life of crime, as his fast paced and poetic tracks highlighted searching for something bigger than himself. He also rapped about being a new father and an artist dealing with substance abuse. Energy was high as he and his entourage jumped on stage, diving head first into the show. A few mosh pits were going in the crowd.

“The show was dope,” French said. “These are my favorite shows because they are 100 percent intimate. You can feel the energy.”

French, a Washington D.C. native, was passionate about performing for the close crowd. His presence on stage was powerful and personable, swapping hats with an audience member during his set.

Fourth-year student Tyler Davies, who was next to the student who swapped hats with French, was dead center in the crowd and has been a Gibbs fan since his groundbreaking album “Piñata,” released in 2014 with producer Madlib. The album stands out from most of Madlib’s previous collaborations, exemplifying a brass high energy different from his adored laid-back beats.

“It was so cool being able to see him perform in such a small venue,” Davies said. “I also really liked how he actually raps all of his lyrics live over the instrumentals. It’s pretty rare to see that nowadays.”

Yet the female presence in the audience was lacking. This may be because Gibb’s popularity has not reached as many fans in Santa Cruz as in Southern California, where his show at Santa Ana Observatory sold out, however there is no denying that many of Gibbs songs do use misogynistic language.

For example in his song, “Shame” off “Piñata,” Gibbs raps about sexual experiences as part of an overall game, with sex as the main objective. In his track “Deeper” he shows some variety when acknowledging that women are capable of pursuing their own destinies apart from sex, but the language still patronizes a woman who didn’t reciprocate his love.

Although some ladies sang along to all his songs and approached Gibbs at the merch table after the show to compliment his performance, it’s clear equal inclusion of women has yet to arrive.

“It was definitely a male-dominated crowd, as are most of the hip-hop shows I’ve attended here in Santa Cruz,” Davies said.

Whether or not the rap game will change any time soon to incorporate the empowerment of women rather than their objectification remains in question. What is clear is that personal narrative plays a heavy role in these stories, and listeners must decide for themselves how to weigh the problematic nature of the verses with the music and the cultural subtext.

Amongst a crowd of fans that blurred the lines between friends, attendees shouted “Gangsta Gibbs!” and “Homie!” as they reached for the artist. As one fan handed Freddie a card to promote his producer, another requested and received a shout-out to his friends in Los Angeles on Snapchat. Gibbs stood there with a familiar smile in a sea of hype and answered all questions.

“Freddie Gibbs is another black man trapped in the cycle of institutional racism,” said student Giovanni Walker. “Yet he is overcoming and inspiring me to gain a platform to talk about real and social issues.” 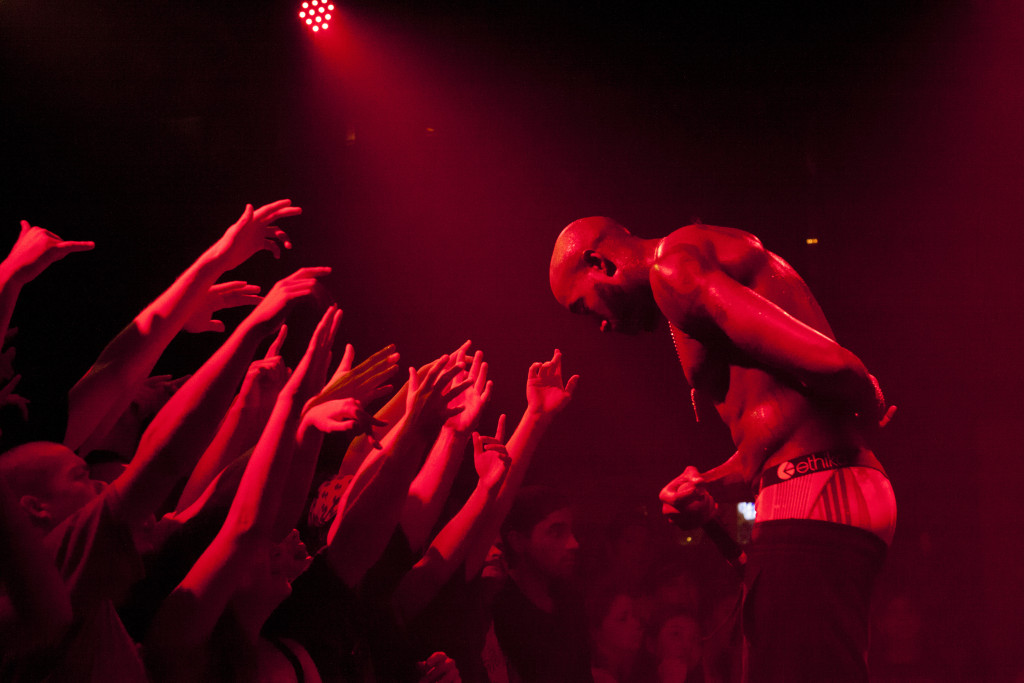