Obstacles of an Undocumented Life

*Names have been changed to protect identity.

Until Maria* was 11 years old, the only memories she had of her parents were from photos, phone calls and the remittance checks they sent from the United States to her and other family members in El Salvador.

She remembers growing up with her grandparents who worked in coffee and corn fields. She remembers the adobe house she called home. She remembers studying by candlelight. But because her father migrated to the U.S. when she was 1 year old and her mother when she was 4 years old, Maria doesn’t have many childhood memories of them at all.

At age 11, Maria decided she needed to see her parents. She made the move from El Salvador to the U.S. And she did it alone.

There are currently an estimated 11 million people who are undocumented in the U.S. That number has remained the same for about five years. A 2008-12 study by the Migration Policy Institute found that almost 8 million of those people — 71 percent of the U.S.’s total undocumented population — were native to Mexico and Central American nations. Persistent trends of violence and economic instability in Latin American nations have led to consistent immigration to the western and southwestern parts of the U.S.

“I heard a lot of stories that if you come to the United States, you are going to have a lot of things that you didn’t have in El Salvador,” said Maria, now a second-year UC Santa Cruz student.

For those undocumented people who seek financial stability through public higher education in the U.S., their immigration status can hinder that pursuit. Because they are ineligible for federal aid, undocumented students are pushed toward taking out hefty loans disguised as aid programs. Their ability to pay off these loans is further jeopardized by the lack of job security due to their immigration status.

In recent years, legislators have tried to create pathways for undocumented immigrants that encompass a variety of residency situations — whether they emigrated as an adult, are an undocumented parent of a child born in the U.S. or emigrated as a young child with no memory of their home country.

The Supreme Court is currently deciding the future of immigration reform as it debates the constitutionality of Deferred Action for Parents of Americans and Lawful Permanent Residents (DAPA), President Obama’s executive action passed in 2014.

DAPA would grant a three-year, renewable work permit and deferred action status to certain undocumented immigrants who have lived in the U.S. since 2010 and have children who are American citizens or lawful permanent residents. Deferred action doesn’t grant someone full legal status, but provides them with exemption from deportation.

If DAPA is struck down, millions of parents will remain at risk of deportation and thousands of families could be torn apart.

DAPA is the most recent legislation in a decades-long national discourse around immigration reform. In January, the Obama administration announced it was enlisting help from the United Nations High Commissioner for Refugees to make entry to the U.S. more efficient for those migrating from Central America, specifically Guatemala, El Salvador and Honduras.

The conditions that cause families to migrate to the U.S. vary but when in the country, undocumented people face similar barriers in accessing the opportunities U.S. citizens have, like getting jobs, buying or renting homes, and going to school.

Public agencies have made efforts to bridge this gap by passing legislation like DACA — Deferred Action for Childhood Arrivals — and the DREAM Act — Development, Relief, and Education for Alien Minors. Still, not all undocumented immigrants, including those who arrived as adults, are eligible for DACA or the DREAM Act.

There are over 3,000 undocumented students in the UC system. The UC Office of the President (UCOP) just announced a loan program for undocumented students. Each campus offers its own resources as well. UCSC offers some resources for undocumented students through Undocumented Student Services housed under Educational Opportunities Program (EOP). Such programs exist to ease students’ transition to the U.S. and make them feel more welcome. However, incendiary remarks from politicians advocating for stricter immigration reform combined with a lack of institutional support nationwide may make a new home harder to adjust to.

“That changed when I was nine,” Carmen said. “That’s when all of the violence went insane, because all the different groups of drug dealers started fighting for territory.”

Carmen, also a second-year UCSC student, is referring to a continuation of violence under President Vicente Fox’s term. In 2005, the Michoacán-based drug cartel La Familia Michoacana caused a spike in organized crime. Fox’s administration first declared war on the nation’s drug cartels — specifically Arellano Felix Organization, known as the Tijuana Cartel — in 2000. Subsequent presidents have continued Fox’s war on drugs, and it’s estimated that there have been at least 80,000 homicides linked to organized crime since 2006.

“It’s been well documented that there is a high rate of these countries that are dominated by gangs, and law enforcement is very ineffective in many of these places,” attorney Doug Keegan said.

Keegan, also the program director of the Santa Cruz County Immigration Project (SCCIP) based in Watsonville, said violence and financial instability are two primary factors that push people to immigrate.

Drug cartels in Carmen’s neighborhood started claiming territories and demanding money from business owners for protection fees — about $500 a week. She recalled one instance when someone near her was executed for not paying extortion fees.

She’d hear about murders at least three times a week. “You would be surprised how many people get to a point where violence is a normal thing.”

Carmen said the cartels and their violence caused her family to decide to move.

“If it wasn’t because of them and the confrontations they started having, my family’s business would have kept going,” she said. “It would have kept on being prosperous.”

Jonathan Fox, professor emeritus of Latin American and Latino studies at UCSC, links the increase in immigration attempts by Central Americans to the poverty present in their home countries and the persistent violence. According to Honduran newspaper La Prensa, a 2015 investigation found that Salvadorans and Hondurans pay about $390 million and $200 million respectively to organized crime groups in annual extortion fees.

“The governments of the Northern Triangle [Guatemala, Honduras and El Salvador] have failed to protect their citizens from organized crime, and they are pursuing hard-line policing strategies that so far have not worked,” Fox said in an email. “The police forces of Honduras and Guatemala in particular are known for their corruption.”

Like Fox found, financial hardships also frequently drive migration. In El Salvador, Maria’s family struggled to make ends meet. Even with the checks her parents sent them from the U.S., she and her grandparents lived in a home with no water or electricity, which of children in El Salvador live in extreme poverty, according to World Vision.

“I was lucky compared to other people,” Maria said, “because they didn’t have anything to eat at all, or they didn’t have shoes or clothes, or they couldn’t go to school because of the financial circumstances.”

Doug Keegan, SCCIP program director, cited failing economies, like in Maria’s case, as an incentive to look beyond one’s borders for stable employment opportunities. Honduras, Guatemala and El Salvador are among the poorest nations in Latin America, according to a 2014 Pew study, with 30 percent, 26 percent and 17 percent of their respective populations living on less than $2 a day.

“We also know that these countries have very high rates of poverty,” Keegan said. “Many of these people are finding it very difficult to survive in their home countries [and] in their communities due to lack of employment and lack of real economic opportunity.” 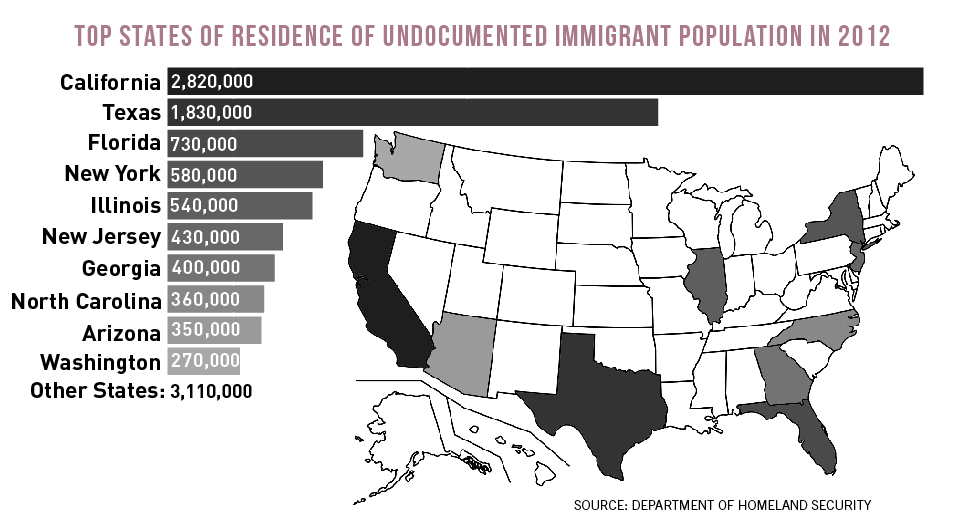 A landmark immigration legislation, DACA, was implemented by the Obama administration in June 2012. It allows people who are undocumented to apply for a two- year work permit and exemption from deportation if they were living in the United States before June 2007. Over 665,000 people have been granted DACA status to date.

In February, UCOP allocated $5 million for the DREAM loan program to help students who are undocumented finance their education. These students are ineligible for federal financial aid and remain concerned about their ability to pay off loans, given the uncertainty of their immigration status and job security.

“[The government] is trying to keep people in college, but at the same time [it is] finding other ways to not encourage you to go and fight for your right to education,” Maria said.

There are specific resources at UCSC, often centralized in EOP, to help undocumented students navigate issues like financial barriers and academic rigor. In addition to a staff academic counselor dedicated to undocumented student services, a team of 10 undergraduate interns serve as mentors to work one-on-one with students. There are workshops on wellness and advanced parole, summer orientations for community- building and services for students who are legal residents but have immediate family members who are undocumented.

EOP, along with identity-based student-run organizations, focuses on retaining undocumented students on this campus. Maria said EOP and Union Salvadorena de Estudiantes Universitarios (USEU) have kept her on this campus and helped her find community through relatability.

“If you’re a first generation student coming here, you don’t know anything about midterms, finals. You don’t know of the process here,” Maria said. “But now it’s easier. I got involved with USEU, which wants to help not only the Salvadoran community, but also all Latinos in general, to help them achieve their dreams — either personal or academic.”

In fall 2015 at UCSC, 413 students were undocumented — just 2.5 percent of the undergraduate student body. 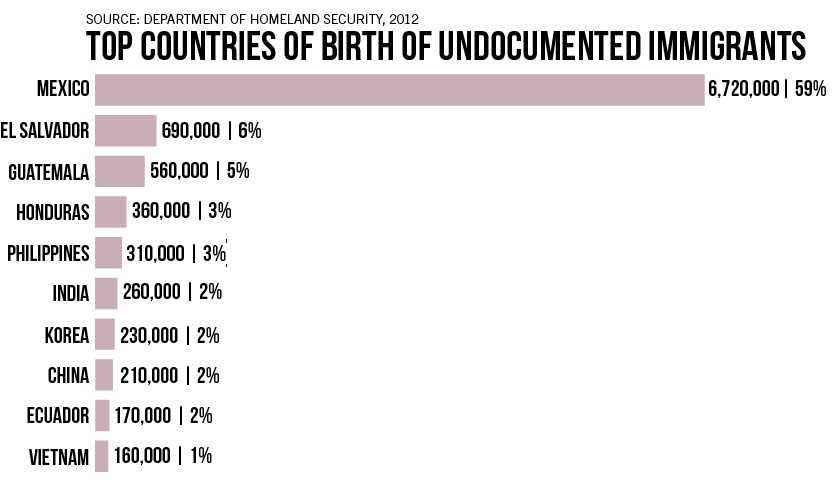 Earlier this month, undocumented immigrants’ stories made their way to the Supreme Court. In anticipation of the DAPA decision, a national non-profit called United We Dream, which consists of more than 100,000 undocumented youth, submitted their stories to prove how they’ve benefited from DACA.

It tells the stories of a 23-year- old schoolteacher from Mexico whose younger sister now has the opportunity to attend school, a 28-year-old from China who is now a software engineer at Twitter, a 21-year-old from the Philippines who — because he had a driver’s license under DACA — was able to drive her father to the hospital when he suffered a severe heart attack and save his life.

There are stories of undocumented students who turned to careers in education to give back to the system and stories of students who are giving back in technology fields, public sectors and service fields.

“Without DACA, many of these families would become more isolated and less secure — and would face the devastating possibility of separation due to removal,” the letter reads. “In myriad ways, then, DACA strengthens the families of undocumented immigrants and U.S. citizens alike.”