Student Fees on Next Week’s Ballot

Measure 64 proposes to amend Measure 32, which began fall 2007 and is permanent, with no end date. It proposes to increase the current student fee for physical education classes from $4.50 to $12.50 per quarter.

“The additional fees will go on to support existing courses that are in high demand,” said Dustin Smucker, the director of physical education. “For example, beginning swimming courses usually fill up quickly, leaving out many students who need that prerequisite to take other aquatic classes like surfing.”

“The current pay rate makes it difficult to retain or attract the best instructors,” Meyer said. “We teach here at UCSC for the atmosphere, not for the money. Because we could be making high pay rate doing personal training in private gyms. We are teaching here because we like working with the students.”

Measure 65 is an amendment that indefinitely extends the $30 Student Life Facility Fee (SLFF) passed in 1985. The fee was the sole source of funding that maintained the operation of OPERS facilities for nearly 30 years. In fall 2017, the fee is set to expire.

Though the Student Union Governance Board — which received a portion of SLFF to build the Student Union — is splitting from OPERS and proposing its own fee for building operations, OPERS is proposing to extend the $30 per quarter fee. This will fund “the ongoing operation, maintenance and future improvements to all OPERS facilities.” Funds will go toward student wages for about 200 jobs at OPERS and costly maintenance projects like the pool filtration system and lights on the Upper East Field.

If the measure doesn’t pass, facility hours will decrease by 40 percent and the pool may close. Student employment hours may subsequently decrease and programs like Cruzfit may be in jeopardy. OPERS would consider these options if additional funding is not approved.

“There really aren’t facilities like this on campus where students can gather in a critical student space,” Smucker said. “OPERS provides students the opportunities to have a healthy lifestyle, make income and engage with friends.”

NCAA athletes are also greatly impacted by the outcome of the measure because most student-athletes rely on the facilities for training.

“All of these measures impact athletes on campus,” said senior NCAA women’s soccer player Rika Goto. “We use the Wellness Center routinely for practice. If facility hours are cut, where are we going to train?”

“At some level, students are asking, ‘What do we want collectively even if individually I won’t use it?’” Wirls said. “The problem is you can break everything down to, ‘All we are doing is going to classes and going home, and there is nothing going on, on campus.’” 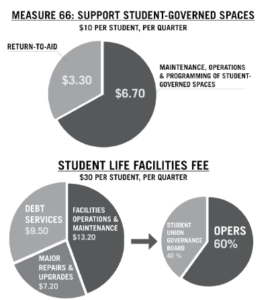 Since the Student Life Facilities Fee (SLFF) was passed in 1985, student fees have funded the Office of Physical Education, Recreation and Sports (OPERS) facilities and student-governed spaces, which include the Student Union, Redwood Building and Student Media Center. But in fall 2017, the fee is set to expire, and OPERS and the Student Union Governance Board (SUGB) have split to propose two new measures, Measure 65 and Measure 66 respectively.

“We decided to split because based off our assessment we each have different needs, so we decided that was the best thing for both of us,” said SUGB Vice Chair Susan Nieves.

Under the SLFF, each student pays $30 per quarter toward the fee, and the funds are used for construction debt service, operation, maintenance and a fraction of it has been set aside as emergency reserves.

But since the buildings are now paid off, the proposed Measure 66 would establish a new fee of $10 per student per quarter for “maintenance, operations, reserves and programs of the student-governed spaces,” according to the resolution drafted by SUGB. Part of the $10 fee, $3.30 of the fee will be part of a Return-to-Aid component for student financial aid. This portion of the funds will help students who rely on financial aid to be able to cover the cost of the fee.

Without Measure 66, student-governed spaces would have an uncertain future unless administration decides to fund them.

“When administration does step in and fund these spaces they will no longer be student funded, and we may lose governance over them. So we’re no longer the ones making our own decisions on our own funding,” said SUA Officer of Diversity and Inclusion and SUGB Chair Sauli Colio.

“As students, we pay so much money to this institution, and we have very little say in how things are spent and how things are decided,” Colio said. “And this is why this measure is really important, because we are maintaining a space for ourselves to be able to meet the ones making the decisions and assessments on the budgets.”

SUA voted to endorse SUGB and Measure 66 after SUGB presented its resolution during an SUA meeting on April 26.

“We try to represent students in the best possible way we can,” Susan Nieves said. “We know the importance of these spaces, and that’s why we’re deciding to run this fee to tax ourselves.”

If 50 percent of students vote yes, the question of funding NCAA athletics will be placed on the 2017 ballot as a student fee referendum. If the simple majority threshold is not met, the program will be eliminated by June 2017 when the temporary funding expires. Currently, NCAA athletics receives $1 million a year from UCSC’s central administration, but that stipend expires in spring 2017.

For NCAA athletics to exist on campus past 2017, the majority of students need to support the opinion poll and the fee proposal in next year’s spring elections.